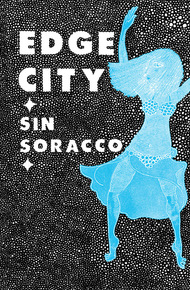 Edge City, from the author of Low Bite, takes place in an every-noir-city (a thinly veiled portrait of San Francisco's North Beach), and its newest resident is Reno, an angry fledgling just hatched out of prison. Getting out is like a weird dream, and the streets of the City are a muddle of sensations pooling around her.

First there's the bustle—everybody busy with mysterious businesses—an amplifying racket of choices. Staggering out onto the late night streets of the City, Reno ends up at the infamous Istanbul Club: dim lights, Arabic music and the sensual Su'ad dancing. Music, booze, babes and drugs: what more could a felonious girl want?

She encounters Huntington, the poisonous charmer who lives above the Club—perverse and powerful in the way only the wealthy can be. Eddie, the underage bartender, is happy to chemically enhance every waking moment. Slowmotion, the sound light technician, huge and darkly mysterious, has connections to people and places that Reno didn't even know existed. Slowmotion's elegant friend, Poppy, offers mental transport to realms beyond Xanadu; in her little valise there's everything necessary for any trip, including the hallucinogenic "Teeth of Idi Amin."

The owner of the club, handsome gambler Sinclair, hires Reno to waitress. Grumbling, drinking, snarling, and swearing, Reno bangs her way through everyone else's complicated plans, entangling herself in a byzantine labyrinth of betrayal, revenge, general mayhem, and yes, good times.

San Francisco before the start-ups and dot.coms was a town where anything goes, and you didn't even need money. One crazy night, one wild bar, one queer ex-con looking for another chance to get everything wrong, and in North Beach's legendary Istanbul Club, our heroine Reno will get her chance to ruin her life again, and bring everyone down with her. In noir terms, this one's a romp. – Nick Mamatas

In his luxurious flat above the Club Instanbul, Mr. Huntington dropped his gold pen and glared at his gold watch. He rolled his elegant head trying to work the cricks, felt his scattered energies itching through his clogged veins. He didn't approve of tension; he ought to be beyond his nervous anticipation.

His electronic pocket organizer plugged into the small blinking computer, he began to arrange his latest column, correcting as he typed. Conflicting information piled up: art gossip. Byzantine fiances, labyrinths a less avaricious man would never traverse. The autumn cold seeped into his bones, into his mind. A jungle of things lived there, chilled into a kind of stasis; most of these he managed to keep contained, properly sorted.

Things sometimes shook loose, demanded his attention: the silvery ghost of a slender wicked girl, long dead, rose up through the murk. He examined it, aiming for dispassion, but he was still unable to distance himself– he had been young, foolish, struck mad by events beyond his comprehension.

He drank more unblended; as he waited for that amber warmth to hit, he relived those hours: finding Aisha on his couch, her hands folded casually around a string of worry beads, her long eyelashes trembling with each thin breath but never quite lifting even when he touched her, spoke her name. She was turning blue so he rouged her cheers, her nipples, he painted her lips a dark red–she'd already done her nails.

Memories are corrected printouts. He never allowed reality to interfere with anything. In his edited memory he left the gold scarab necklace around her neck–a sacred gift symbolizing their love. He never recognized his own platitudes. He'd actually taken it off her neck, slipping it in his pocket with hardly a though: all Aisha's gold belonged to him.

He remembered taking her long gold earrings, wondered, irritated, what he had done with them–had he sold them or put them in the safety deposit box? An aggravating lapse.

He remembered, distantly, how he arranged her naked, still pliable corpse on his bathroom floor, told the doctor she must have been going to take a shower after rehearsal, then a sudden heart attack.

Gave meaning where there was none.

Nice girls, good wives, didn't overdose on heroin back then anyway. Certainly not on his couch.

He shook his head. Coffins. Satin-cushion composting boxes. Coffins, he thought, were the worst. At his request her body was immediately cremated. No public autopsy report, no worms.

Refusing to justify his choices, he pushed keys to send away the dead silvery face leering at him from the computer. These exorcisms took time. Furious, he put his spoiled column aside, intending to get back to it later, send it to the magazine in the small hours.