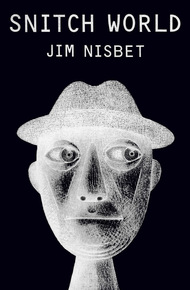 San Francisco writer Jim Nisbet has published nine novels, including the acclaimed Lethal Injection. He has also published five volumes of poetry. His novel, Dark Companion, was shorted-listed for the 2006 Hammett Prize. His works have been published in French as well as English, along with a miscellany of additional translations into German, Japanese, Italian, Polish, Hungarian, Greek and, forthcoming, Russian and Romanian.

Snitch World takes place in a San Francisco of menacing technology, where the old cons come up short and the crimes of the gritty night have morphed into slick capers pulled off by the glow of a smartphone.

Klinger hangs out at the Hawse Hole, a sordid dive even by Tenderloin standards. All he really wants is enough cash to buy a cup of coffee, some cigarettes, a bug-free hotel room. The simple act of picking a carefully targeted mark's pocket initiates a series of events that get stranger and more dangerous by the moment. Jim Nisbet, with his characteristic humor and brilliant prose, creates a world where trust, and even cash, are the avatars of a loser's game.

This is Snitch World, where a nine-dollar app can be as deadly as a dirty needle.

There isn't a smarter crime writer working today than Jim Nisbet, and that's the case with both book smarts and street smarts. Whether it's the technical details of computing or the criminal trade, or the conversational tics of urban lifers and recent settlers, Nisbet nails it with clear-sighted observation and the blackest (noirest?) humor. – Nick Mamatas

The Miata jumped the curb and sheared off a light pole. The impact deployed the airbags, but Chainbang was ready. He knifed Klinger's before it was fully inflated and his own before it could crush the glass pipe in his breast pocket. The six-inch blade went through the nylon like a pit bull through a kindergarten.

Or so he thought. His arms absorbing the shocks transmitted by the rim of the steering wheel, Klinger didn't mind a nick on his right cheek inflicted by the blade, its vector skewed by the onrushing fabric. And then, shredding his own safety device, Chainbang stabbed himself too, under the chin.

Neither of them noticed.

It was three-thirty in the morning. At the moment, there was no traffic.

"Fucker's quitting while it's ahead," Chainbang observed.

"Yeah, well," Klinger advocated, "it's quitting while we're behind."

As Chainbang stared up the street and paradiddled his knife over the vinyl, a swiveling red light came on over the garage door of the fire station.

"Senseless violence," Klinger was saying. He turned the key in the switch like he was turning a screw into a cork. "You think you killed that guy?"

Chainbang shrugged. "I hit him hard as I could."

"Might have done it," Klinger concluded grimly, and now, though he'd been patient with the nonrespondent starter, the shank of the key wrung off in the switch.

That's the thing about adrenaline, Klinger thought, as he thumbed the stub of the key in the darkness adjacent the steering column. A man under its influence doesn't know his own strength.

The preliminary moan of a siren emanated from the rising garage door of San Francisco Station No. 5.

Klinger dropped his hand to the door handle. "It's time for us to go." He held out his other hand. "Give me half of whatever comes out of your pocket."

Chainbang continued to stare through the windscreen, and continued to drum the flat of the knife on what was left of the dashboard. His eyes refocused on the glass in front of him. Now he noticed the long crack that meandered from the lower-right corner of the windscreen on the passenger side to the upper-left corner on the driver's side. It meandered like the Snake River across the befogged reservation of his youth. Befogged is the wrong word. Chainbang's memory of his youth lay beyond any number of smeared thicknesses of graffitied Lexan, securely obfuscated.