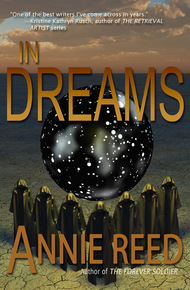 In Dreams by Annie Reed

A near-future tale of love, loss, and redemption.

Nature videographer Jerome and his lover Andy, an environmental activist, dedicated their lives to rescuing the planet from the disasterous policies of generations past. Just when their efforts began to make a difference, Andy lost his life at sea.

A mysterious man has entered Jerome's lonely, solitary life. A man who wears Andy's face but has none of his memories. A man who's haunted by an unknown presence that cloaks itself in the fog and watches.

Award-winning author Annie Reed has not only had her science fiction stories honored by fellowships, but one of her mysteries was selected for The Best Crime and Mystery Stories of 2016. I loved Annie's story in Fiction River Moonscapes when I bought it, so when putting this bundle together, I wanted her in it. And thankfully she had available In Dreams, a gripping near future science fiction of hope and loss. And so much more! I have no doubt you will enjoy not only this story, but her stunning story in Fiction River: Moonscapes. – Dean Wesley Smith

Andy had asked Jerome once how a kid who always ran when he could have walked learned how to sit still long enough to wait for the perfect moment to take a picture.

"I think it was all those morning runs," Jerome said. "Whether I'm moving fast or slow, I just like being outside. Watching things. Taking it all in."

"You are a disgusting morning person." Andy had given him an impish grin before kissing him on the nose. "The only time I want to see the sun coming up is if I haven't gone to bed yet."

Andy had been a true night owl. Jerome was an unabashed morning person. Andy loved tea. Jerome would happily trade all the tea in the world for a nice strong espresso blend. Andy had been a button-downed business person whose idea of casual was a navy sportscoat over a dress shirt with no tie. Jerome sometimes went for days without wearing shoes.

Yet somehow they still managed to make a life together.

A good life. A happy life. A life worth all the thousand little compromises that people in love made every day to make a life together work.

And it had all ended without warning nearly five years ago.

These days Jerome ran because it was the only time he forgot he was alone.

He ran until his legs ached, until his breath rasped in deep gulps that made his lungs burn, his feet go numb, and slicked the inside of his shoes with blood from cracked calluses and broken blisters. And then he kept running.

He ran when the pavement beneath his feet was slippery and cold or when it was meltingly hot. When each stride jarred his hips or sent jolts of pain up his spine.

The house where he lived now had the same kind of long dirt driveway as the house where he'd grown up. The dirt driveway connected his house to a two-lane county road that wound its way from I-5 to the Pacific Coast highway, twisting and turning back on itself like a snake sidewinding across the low coastal mountain range.

He varied his morning runs only by the direction he turned when he reached the end of his driveway. If he turned to the left on the two-lane county road, he ran inland toward the town of May Creek, little more than a collection of houses clustered together around a refueling station on one of the many bends in the road. If he turned to the right, he ran deeper into the heavy forest that blanketed the coastal mountain range. The road to the right took on just enough of an incline that he felt the burn in his muscles sooner, and the return trip home was faster than the trip out.

Today, though, something made him turn to the right. Maybe it was the allure of early morning sunlight through the remnants of the foggy marine layer from the coast, or the warm glow of morning light that turned the tops of the tall pines a yellowy, delicate green. Maybe it was the inexplicable itch in the middle of his back between his shoulder blades that drew him toward the windy road that ran through the thickest part of the forest.

He didn't know. He just went with the feeling. He'd been living his days like that for four years now.

The early morning air still held a chill, but the spring birds were flitting through the trees, and he saw more than one ground squirrel scurrying along the side of the road. Lambs trotted next to their mothers in a pasture half-hidden behind a thick stand of cedars, spruce, and aspen trees, the grass in their pasture a brilliant spring green.

It was the first of May. Jerome had crossed one more day off the calendar that morning, a long line of Xs marching irrevocably toward an anniversary he wanted to forget and couldn't help but obsessively remember.

The day Andy had died.

He rounded a sharp bend in the road, feet slapping the pavement, breath puffing out from the climb up the steady incline toward the coast. The itch between his shoulder blades had grown stronger, joined by tension in his neck at the base of his skull that had nothing to do with running.

No other runners were on the road. A few dogs had barked at him from behind chain-link fences, but he knew the dogs and the dogs, in spite of their barking, knew him. Only a few cars had passed him, and they'd given him a wide berth. He'd waved to one bicycle rider—a guy named Gus who rode his bike every day, rain or shine, to his job at the Chevron refueling station in May Creek—and Gus, old-style earbud wires trailing down from his ears to the retro phone in his pocket, had given him a friendly wave back.

Jerome tried to shake the feeling off. The upcoming anniversary was playing tricks on his mind, that was all. He concentrated on his breathing, on watching the receding fog, and playing around in his mind with composing what might be a halfway decent shot of the trees, the fog, and the golden morning sunshine. These days he took most shots with his pocket tablet instead of a dedicated vid camera, and he deleted most of those when he got back to his house, but the mental exercise kept his mind sharp.

Or so he told himself.

He was so intent on the play of sunlight and shadow in the treetops that when he rounded a curve in the road and caught sight of someone else, he nearly stumbled.

A man was sitting in the middle of the road between the broken yellow line and the moss-covered shoulder, sitting sideways with his legs pulled up and his body bent forward over his knees.

No, not just a man—a black-clad, dark-haired, slender young man.

The man's face was turned away from Jerome. He was looking in the same direction Jerome was headed, his arms wrapped around his knees, rocking slightly.

There was such longing in his posture, Jerome felt it immediately. If he'd had his tablet out, he could have taken a shot of the man on the road, and everyone who saw it would have felt the same longing.

Jerome understood what longing like that felt like. He lived with it every day of his life.

"Hey," Jerome said loud enough to be heard. "Probably not a good idea to sit in the road like that."

The few cars Jerome had seen had all given him space, but he'd been running along the shoulder. He also moved as far to the side as he could every time he heard a car coming, and still there'd been times when a car had sped around a curve so fast Jerome had to bail into the undergrowth on the side of the road just to get out of the way.

No one would be expecting someone to be sitting in the middle of the road.

The man would have no chance to get out of the way. But he gave no indication he'd heard Jerome's warning. Instead, he laid his head on his knees, face still turned away.

There was something eerily familiar about that gesture.

Andy used to sit like that when he needed to stretch the tension out of his back after a long day at work.

Jerome's heart lurched in his chest. He stopped dead on the road, almost afraid to come any closer.

He felt an odd sense of vertigo. His vision tunneled down to just the man, the road, and the distance between them. He tried to tell himself he was only seeing what he wanted to see, but his heart insisted that what he saw was real.

The grinding of gears and the whine of a souped-up engine revving up broke the stillness of the moment.

Someone was driving an antique muscle car up the incline, racing the curves. Jerome had seen a few of the old-style cars here and there. They all had rebuilt engines since the original engines couldn't handle synthetic fuel, but the rebuilts were made to sound like the vintage models.

Andy had hated those cars, and he'd had little use for anyone who insisted on driving them. "Cars like that nearly killed us all," he used to say.

This car, though—it could definitely kill the man in the road if he didn't get out of the way.