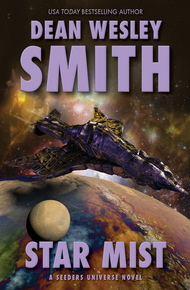 A dead alien ship appears close to human space. But in millions of years, no alien race managed to leave its own galaxy.

The alien ship originated in a galaxy over two hundred thousand years of travel away. But the Seeders need to know about the alien race, in case they are a threat.

Star Mist takes on the vast scale of the Seeders Universe and expands it even more.

I am the curator of this bundle and also was the editor of Fiction River: Moonscapes. It is tough to talk about myself, but I can say the novel in this bundle is Star Mist, part of my vast Seeders Universe. It stands alone, as do all my novels and is space opera. I suppose I should also tell you I have over 23 million copies of my books in print and have published well over 150 novels and more hundreds of short stories than I can count. And I've made a bunch of bestseller lists along the way. – Dean Wesley Smith

THE ALIEN SHIP looked more like a large pile of black and gray garbage smashed together into a large ball than a spaceship hanging there in the blackness of space just beyond the edge of the Milky Way Galaxy.

Yet Chairman Wade Ray knew it was a ship.

And that ship was the most important discovery in hundreds and hundreds of thousands of years of human history.

Chairman Wade Ray stood, his hands behind his back, in the command center of his ship, staring at the image of the alien ship on the huge monitor that filled one wall of the command center. Ray had his long, silver-gray hair pulled back as always and wore a dark-silk dress shirt and dark slacks and soft leather shoes.

He could feel the tension around him in the huge room like a heavy blanket on a warm night.

Sixteen people manned stations behind him and not a one could be heard. They all felt as he felt, that what they were seeing couldn't be possible.

Tacita, his wife and partner and co-chairman of this ship, stood beside him, also just studying the strange shape of the alien ship. She had her hair extremely short and wore a black silk pantsuit.

To Ray, she was the most beautiful woman he had ever seen and he had been in love with her for more years than he wanted to think about.

He couldn't imagine ever not having her brilliant mind and sharp wit working beside him.

Especially now, when they faced an alien ship.

He shook his head. How was this even possible?

No alien race in thousands and thousands of galaxies had ever managed to survive long enough to build even a galaxy-wide civilization, let alone a ship that could travel the vast distances between galaxies. When the Seeder scout ships discover an alien race growing on any planet in a galaxy, at any level, the Seeders would just go around that galaxy.

Over the centuries, Seeder research ships would watch the alien development, but never interfere. It was one of their most scared laws, learned out of bad experience a long, long time ago.

Very few alien races even survived long enough to make it off their own planet. And even fewer found trans-tunnel drive to jump to other close stars. And for as long as humans had been seeding galaxies with more humans, no alien race had found the refinements to trans-tunnel drives to get the standard speeds to break out of their own limited galaxies.

Yet somehow, he was looking at an alien ship that was between galaxies.

"Any life signs at all of any type?" Tacita asked.

"Nothing," Commander Chain said. "We also checked for any form of stasis. Nothing."

Chain was their most trusted second in command on any ship and had been with them thousands of years. He looked, as most Seeders looked, to be about thirty. He had dark brown hair and never was seen out of jeans and a sweatshirt.

"How large is that ship?" Ray asked.

"The size of a Seeder mother ship," Chain said.

"Any equipment at all active?" Tacita asked.

"Except for the trans-tunnel drive still powering it forward," Chain said. "Nothing is active. No atmosphere of any kind, no readings other than the drive. And honestly, it looks like the drive is about to fail as well."

"Can you get a reading on the age?" Ray asked.

"At least two hundred thousand standard years," Chase said. "And from the looks of the damage from impacts of small particles and such after its shields failed, it has been dead for a good hundred thousand of those years."

"Trace back its flight path and put up on the screen where it came from," Tacita said.

Ray was surprised when the image appeared of a thousand galaxies in all their various groupings. Right now they were in the middle of what was called the "Local Cluster" by humans in this galaxy. About thirty galaxies of different sizes and shapes. On the scale on the map on the screen, the local cluster barely showed up as a dot.

The alien ship had originated, or passed through a galaxy that was a vast distance away. Ray guessed there were four hundred galaxies between where it started and where it was now.

"I've accounted for galactic movement on the rough track," Chase said. "That ship never got near another galaxy of any size since it left that galaxy."

"At its speed," Ray asked, "was the ship still functioning when it left that galaxy?"

"Yes," Chase said. "From what we can gather on preliminary scans, it appears it left that galaxy very much alive and functioning."

A dot appeared about halfway along the line of travel on the big screen. "The ship went dead about at this point, from what we can tell so far."

"We need a massive amount of study of this ship," Tacita said. "To find out who this race was and what happened to this ship."

She looked at Ray and he nodded.

Ray agreed completely. They did need a massive amount of study on this ship. And they were going to have to do it carefully and not miss anything.

But his eye went back along the line the ship had taken from that original galaxy. They also needed to know what was happening there and in the galaxies around it.

Two hundred thousand years had passed. Were these aliens expanding as humans did?

And were they warlike?

In space where very, very few advanced civilizations ever emerged from planets, what would the aliens even think if they knew humans were here and spread over hundreds of thousands of galaxies in this area?

Ray kept staring at the image of the ship's path on the wall screen.

Even by the galaxy-spanning scale Seeders worked and thought at, the alien original galaxy was a very, very long distance away.