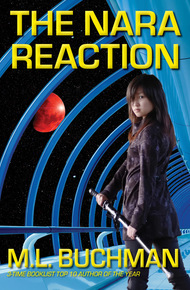 The Nara Reaction by M.L. Buchman

The Crash and Smash destroyed the most feared race in history. All but one. Ri, the child warrior: Born of the shattered streets of Nara, Japan. Where books burn to heat the night.

Her rescue exposes humanity to the greatest warrior of the modern age. The likes of which it can no longer control.

Bryce, the clone of the world's cruelest dictator, tends bar and hides from his past.

When the Earth dies, only one chance remains. Work together. But they must hurry, before they're both caught by The Nara Reaction

Bestselling author and 3-Time Top 10 Author of the Year by Booklist, M.L. Buchman writes in many genres. He's an acclaimed military romance writer and has a thriller series based around great chefs of the world. But he also writes science fiction and I loved his short story I bought for Fiction River: Moonscapes. So when I asked him about a science fiction novel for this bundle, I wanted his The Nara Reaction, the first book in his Nara Saga. NPR named one of his books "Top Five of the Year," so he knows how to keep a reader on the edge of their seats. – Dean Wesley Smith

It was perfect. James Wirden's voice started with all the power one would expect from the World Premier, but it ended the most delicious twist of uncertainty. Bryce looked down at the nearly empty champagne glass in James' hand.

"And you dare to tell me this?" Such indignation from such a small man.

He turned toward the guards, but Bryce clamped a friendly hand upon his shoulder to belay the movement.

Not that it mattered, all of the guards along the line of French doors were his hand-picked staff. The bright lights from within cast their tall shadows across the stone terrace pushing back the edge of the Bermudan night. His men would stop any stragglers from the party, not that any would dare interrupt when the Premier and his mighty right-hand man were in conference.

But no point in misplacing trust when one staged a coup.

"One of the many things you never properly appreciated, James, is the wonders of modern genetics. There is a tiny little code-alterer running through your system even as we speak. Your genetic code is even now shifting at an exquisitely subtle level. When you have a massive stroke in three days, none shall grieve as much as your lieutenant. None shall take power with as much trepidation as your Right Hand." A nickname Bryce had carefully cultivated for years. Who better to be named to power than the man who knew the Premier's every intent?

The man struggled against his grasp just as pointlessly as a worm evading a short future pithed upon the hook that would send it into the fish's belly. Bryce took the champagne glass from James' nerveless hand and tipped the dregs over the broad stone seawall to splash into the eager waves below. Soon, he promised them, soon you may swallow this useless chattel as well.

The Premier's pale face twisted in such pain that for a moment Bryce feared the stroke would come too soon. He didn't have everything in place yet. Of course, he could compensate, but having the man die in his arms would not look good at all to the World Economic Council.

"You must remember to breathe, my good leader. Besides, in another few minutes you will remember none of this. Another wonder of genetics research you so despise is the revelation of how memories are stored. Your memory of these moments will shortly be erased. And when you pass on in three day's time, your Right Hand will be there, the Premier-to-be, Bryce Randall Stevens, Sr."

James patted at the beads of sweat on his brow with his small hand as he looked up at Bryce. He always backed up when they spoke so that he didn't have to crane his neck, but Bryce kept him in his place this time. The music surged through the open doors onto the broad patio. The orchestra had come back precisely on schedule drawing everyone's attention inward. He didn't want any to think his conversation with the Premier took overlong if the drug didn't take affect as planned. Of course he knew it would, it had worked perfectly on the man who'd engineered it for him.

"Stupid man, what does hate have to do with anything? You're weak, James. Always were. If I hadn't pulled every single string over the last four decades, Parvati and her temple of democratic fairness would still be in power. I have used you, because you are far more presentable than I. No one expects a small, rotund man to be vicious. Therefore, there were no curious eyes as I did what you were too weak to do behind the scenes. But now you are beginning to interfere. You should never have nuked Auckland."

The little man sputtered. "I had to Bryce. You and your damned gene labs. There is a reason we outlawed that horrible knowledge. We did it. You and I. Together. When I found you were dabbling in that dark road to hell, of course I had to blow it out of existence."

"Too little, too late, James. Do you think I'd have let you drop those bombs if I wasn't ready? All you did for me was a little convenient housecleaning." Actually he'd barely gotten the chief scientists and the data clear. Less than an hour warning had let him salvage only the most essential elements. But the continuing research on the uses of the Second Human Genome Mapping Project lived on, even if the researchers families hadn't. And he'd gotten to look like the hero to the ones he had saved.

The blow of his failure took the fight out of the Premier. Bryce gave James' shoulder a jovial shake in show for any who might be watching.

"On December 24th, three days after this birthday party, lovingly thrown by your second-in-command, I shall mourn at your side. I shall cancel Christmas throughout the planet. It shall be a splendid funeral. And by the New Year, the World Economic Council will place me in command and then things shall really start to move."

James' little eyes squinted up at him for a long moment before turning to look out at the restless sea. He hung onto the rough seawall to keep from being toppled by the gentle night breeze and stared toward the dark waves.

"They will suspect you."

"There will be no proof. The last of the drug has just been dribbled into the sea. The change to your genetic code has already been registered in your electronic medical records, by a fine hacker who has, alas, suffered a memory loss due to some bad fish he ate. Very bad fish. You don't maintain paper files, so I'm safe."

Bryce leaned down to watch his face, but James was turned toward the night and he was totally in shadow. There was a long hesitation, then a twitch of his shoulders that Bryce could feel beneath his hand.

Not careful enough, old friend. He knew when James' was lying. It was for this that Bryce had risked telling him of his own death. The man was so naive that he hadn't banked hard copies against his future. So, Bryce's plan was going to go off without a hitch.

The Premier hung his head and his voice was a mere whisper against the susurration of the surf on the rocky cliffs below.

"What about my wife?"

Bryce glanced back to the surging dance floor. What an odd final question to ask before certain death. Given a chance, what would be his last request? Not about some woman, that was for certain. Though if ever there were one…

Even through the crowd Celia Wirden stood out. Her fountain of white-blond hair and the slender body beneath, shimmeringly not revealed by her gown of midnight-blue silk, did everything to distract from the brilliant mind that hid behind those green eyes.

The three of them had plotted together since they were young. They had thrown Parvati out of power and when it came time to choose, Bryce had forced the milquetoast James to puppet the Premiership for him. And the Premier needed a First Lady. A fine and elegant First Lady she had made. Perhaps it was time to take that gift back.

"She'll be taken care of, James. You don't need to fear for that." James' shoulders squared slowly as the man looked a last time at the dark Atlantic. He took up his empty champagne glass from the seawall.

"Well, old friend. Seems that I am dry. Shall we go get a refill?"

"I am right beside you to the end of your days, James."

At the French doors, he checked James one last time. But he was filled with a bonhomie that even the finest politician couldn't invent. When he refilled the same glass and drank from it, Bryce knew the memory of the last few minutes was safely gone.

James was wrapped up into the flow of the crowd as Bryce waited upon the threshold. The broad squares of alternating black and white marble spread across the room before him like a grand chess board. The sycophants rushed to make what they could of the moment, shuffling like mad pawns, the tuxedoed livery of the government descended upon the wrong man. The short stature of the largest pawn of them all disappeared from view. Bryce would keep a close eye upon him, but not too close.

Nothing must seem out of the ordinary.

He scanned the room. The ladies, those dragged forward by their men, and those abandoned in the sudden rush toward the Premier, glittered about. Their 1920s flapper costumes revealing both the wondrous and the corpulent with an equal lack of sympathy. But they too were all either carefully watching the rush to the Premier, or carefully not watching.

There were just four who were watching the Premier's Right Hand instead. His Captain of the guard, meticulous in his waiter's outfit, was nonchalantly poised to strike from his corner like a steadfast rook. The general commander of the World Economic

Council's forces waited like the good knight he was, not obviously aligned, yet always prepared to offer surprise support from unexpected quarters.

Celia Wirden glittered like the queen that she was. The tight silk revealed a mature woman who had grown into her body the way a yacht grows into a World Cup racer. Her movements could light fire without ever striking a match.

His body responded from the memory of that one tryst three decades gone, the same night he'd sent her to become James' first lady. Her green eyes assessed him carefully from her position far across the room near the small orchestra. A chandelier blossomed above her in a font of crystal as if it had bloomed for her alone.

And off to the side, behind the piano, hid a single junior pawn. Without even the boy being aware, Bryce had been moving him across the board, square by careful square. Perhaps it was time to move the lad one step closer to the far side of the board, where he too would become powerful. Together, many things could be achieved. Bryce would kill the king, take the queen, and create a prince.

Yes. It was time for the next move.