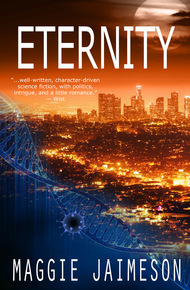 Maggie Lynch is the author of 20+ published books, as well as numerous short stories and non-fiction articles. Her fiction tells stories of men and women making heroic choices one messy moment at a time. Maggie is also the founder of Windtree Press, an independent publishing cooperative with over 150 titles among 20 authors.

Her love of lifelong-learning has garnered degrees in psychology, counseling, computer science, and education; and led to opportunities to consult in Europe, Australia, and the Middle East. Since 2013, Maggie and her musician husband have settled in the beautiful Pacific Northwest where she now enjoys the luxury of writing full-time. Her adult fiction spans romance, suspense, and SF titles under the name Maggie Jaimeson. She writes YA under the name Maggie Faire. Her non-fiction titles are found under Maggie McVay Lynch.

Living 800 years is like the fountain of youth for some…and for others it's worse than a death sentence.

Miki Yokoyama lost both her innocence and her youth when she and her research associate, Rohin Chawla, discover the etnerity virus in the Antarctic. The virus extends human life up to 800 years. A person physically ages only one year for every decade of life. Unable to agree on how the virus should be used, Rohin and Miki go separate ways. Miki works to create a counter-virus and stop unnaturally long lives, while Rohin wants to help people live better lives with their 800 years.

But no one can foresee the extent human treachery will go when there are astronomical profits and world-wide political power at stake. Will Rohin and Miki combine forces against a greater evil, or will they continue to fight each other over prolonged life or natural death? Their decision will determine who survives—and, ultimately, the outcome of humanity's future.

Bestselling writer Maggie McVay Lynch writes all her science fiction under the name Maggie Jaimeson. Maggie, when not writing under three names, is also the founder of Windtree Press, an independent publishing cooperative of twenty writers. Maggie had a wonderful story in Fiction River: Moonscapes called "The Payment," so I hoped she had a science fiction novel for this bundle. Thankfully for all of us she did. The novel Eternity takes on living a very long time, a topic near and dear to my heart since I also write two different series that have long-lived characters. – Dean Wesley Smith

Rohin stood motionless, his eyes fixed on the platform and the funeral pyre directly behind it. Blowers fanned the flames to drive the stench away from the plaza. Resolute, he swallowed the bile rising in his throat. Until he accepted his part in these fiery protests, the demons from his past would continue to haunt him.

To one side a man and a woman removed their long robes and assistants lovingly poured oil onto their bodies. A plaintive, solo flute played a pastoral piece that merged the boundaries of joy and melancholy as the two nude protesters mounted the stairs on either side of the platform. They stepped slowly, but in unison, walking lightly, presenting a ghostly, slow-motion ballet. When both reached the top stair of the upper platform, they simultaneously turned toward the uncaring crowd and clasped hands.

"I ask death for us all!" the protesters proclaimed together. "For each of us a beginning and an end."

Rohin wiped his hand across his brow as nervous sweat beaded. He was no longer sure he could stand and watch. Was it true? Did they really prefer death? How could a discovery meant to lift up mankind be so detested? Mesmerized by their voices, the din of the crowd faded from his consciousness as every nerve in his body screamed "Stop!"

Two others wearing immaculate white robes moved somberly to each end of the platform, their hoods purposefully drawn close to obscure their identity. Acting as one in thought and motion they lit the pyre. The nude protesters neither flinched nor turned as the flames rose behind them. Rohin winced at the hiss and crackle of the flames.

"I beg each of you to join me." The protesters continued their exhortation in unison. "It is only through death that we can save our world! There is no change without death." They swayed in place, not yet moving any closer to the flame. A drum beat their words into a rhythm. "Die with me! Die with me! Together ... Together ...Together." Their feet stomped more brutally as their bodies writhed with frenzy. The drum beats thundered. The pulsating dance moved them in ever smaller concentric circles. A crowd of white-robed individuals gathered near the platform, shedding their cloaks to join the dancers. Now twelve of them writhed and chanted until they matched the volume of the drum. "Burn...Burn like the Phoenix. Burn...Burn."

Their words tore through Rohin's heart, imprinting his mind, drawing him closer. "Die with me," he whispered to himself as his feet stomped to the beat.

Yes, death would be preferable to this life. He hadn't found much meaning in the past two hundred years, and he wasn't sure the struggle was worth it anymore. His body swayed and his feet moved closer to the stage, keeping the cadence which called him forward. Hands reached for him and clawed at his shirt, ripping it from him. Other hands reached for his pants, shredding it into long strips. The chanting grew louder and closer, calling him forward.

Someone grabbed him from behind, "No! No more will go today." He turned to protest. White robes pulled him toward the light. Confused, Rohin shook his head and struggled to cast off everyone who clawed at him. He dropped to the ground and the hands moved away in search of another acolyte.

The drum's beat quickened and the protesters on stage wove their arms and bodies together until they seemed to be one. "Transform ... transform us ... transform," their chant continued. The newcomers shed their clothes as they joined the turbulence of the dance. Assistants rushed to pour oil on their now nude bodies. Sunlight danced off their skins, making it appear as if an aura of light surrounded all of them.

The cadence reached a frenzy and the sound of rolling thunder drowned their voices until only the thumps of the dance could be heard. Rohin closed his eyes, unable to watch their destruction.

All sound stopped. A deafening silence, broken only by the crackling flames, drew his eyes back to the entwined bodies. Unmoving, they stood facing the flames like statues in hell.

In one fluid movement, the twelve nude bodies surged forward like a wave crashing upon the shore, hurling themselves off the platform onto the flaming pyre. The drums picked up again, but not in time to cover the screams of agony as the fire engulfed them.

Rohin doubled-over in revulsion as the stench of burning flesh reached him. On his hands and knees he vomited until his stomach emptied all it held and spasmed over a string of dry retches. Once there was nothing left in his stomach, he forced himself to watch until the fiery end.

When the screams ended, the drums stopped and the flute returned with the same pastoral tune that had started the ceremony.

The hooded assistants stood on the platform and signed their final words in silence, the translation captioned above them on a screen. Death is only change. We transform the world as we arise from the ashes of this life. They bowed and retreated, disappearing as a crowd surged around them.

It had been much worse than he'd imagined. The stories he'd heard in the hives always belittled the protest, made it out to be more like a child's game. But it wasn't a game at all.

A gruff voice followed behind him, shouting "That's him. Get him!"

Without looking to see who shouted, Rohin instinctively ran in the opposite direction. He weaved between potted trees in the square, then ducked down an alley to catch his breath.

His pursuers converged on him, forcing him to spin into them as they closed. In a surge of terror, Rohin turned, kicking and punching at anything that moved. He left two of them on the ground and a third still on his feet, but staggering.

A blinding light engulfed him, followed by a broadening shadow, leaving him in conscious darkness. Rohin bit his lip to keep from crying out as he flailed his arms to defend from more attackers. Stinging numbness started at his toes and worked painfully through his limbs to his brain. The final convulsion struck him to the ground, where he struggled to maintain some semblance of consciousness.

"Don't move, or the next charge will break you," a woman's voice spoke harshly above him.

"Eternity," he groaned, noting the blurred insignia over the woman's breast pocket. No. Not again. He turned to his stomach and stretched his arms out, clawing at the earth in frustration, trying to get some purchase to push himself up.

A woman's voice babbled without meaning while he lay prone, his chin on his arm. The blindness had passed, but he could only see and hear through a veil of fog.

His eyes focused, then unfocused. The tall grass wavered in and out. In and out. A pair of thin trousered legs became clear, then fuzzy. He rolled onto his back and tried to lift the veil to look further.

"He's useless in this state," the woman said to some unseen assistant. "Put him out, then get him into the ambul."

The slight prick of the hypo pressed his bare arm, followed by soothing warmth. Finally, he surrendered to the darkness.

Rohin awoke lying on his back. A flat, hard, cold surface tremored beneath him. A second later he recognized the low, steady sound of a hover. His legs and arms ached. He tried to move them, but they were held—ankles, knees and wrists pressed tightly to the platform. He threw all his strength against whatever pinioned them but they remained immovable. The effort exhausted him and he slipped back into unconsciousness.

When he woke a second time he was still lying on his back; but the surface under him had become softer and motionless. He listened for a sound and recoiled when labored breathing came from somewhere in the darkness. Heavy footsteps trudged toward him, then a bright light glared into his eyes as a surgical mask bent toward him and nodded. He struggled against his restraints. Then he felt the pressure against his arm again.

"TDs?" Rohin whispered. The masked person nodded slightly and the pressure released. Rohin closed his eyes in resignation as the soothing warmth of the truth drugs diminished his fear. And any capacity to rebel.