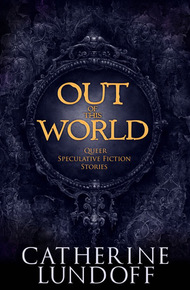 Out of This World by Catherine Lundoff

Eleven tales of the queer fantastic by award-winning author Catherine Lundoff. A bookstore clerk goes on a quest for the Norns while a couple of mercenaries wake up to some big surprises at their favorite inn. Shakespeare's sister, Judith, forms an alliance with playwright Christopher Marlowe. A witch attempts the wrong love spell and a young prince meets an irresistible monster. Swordswomen, ghosts, the Queen of the Fay, the occasional gentleman of the evening and other unforgettable characters populate these stories rich and strange.

I first met Lundoff as the editor of several fine themed anthologies, so I was hardly surprised to find this excellent collection of her own work, brand new from Queen of Swords Press. There is a wide range of stories here, including steampunk, medievalesque fantasy, a fabulous mix of alien invasion sci-fi/noir, and one very cool take on Judith Shakespeare and Christopher Marlowe, and an equally wide range of voices, with a perfect touch of humor. "At the Roots of the World Tree" was a Spectrum Award finalist, and the rest of the collection is just as worthy. – Melissa Scott

"A Day at the Inn, A Night at the Palace"

Morning hit me like a kick from my horse. I thought about summoning a shriek of despair as I opened my eyes, but it was clear that it would hurt too much. Besides, somewhere nearby someone else was groaning enough for both of us.

First I wondered why I let Raven get me into this, whatever this was, even without knowing how my cousin was involved. Then I squinted against the light pouring in through what appeared to be wooden shutters and took a slow, cautious look around. The room looked familiar, in a many tankards later, I-wish-I-was-still asleep sort of way. There were tables, benches and the smell of stale beer and overworked swordswoman. Ah, that I recognized.

But there was something else too. A flowery scent of clean, well-dressed highborn lady hung in the air in a perfume cloud. That was...unusual, given the kind of women I usually woke up with. All the more so as my foggy mind had recognized the room I was lying in. Highborn ladies did not come to an inn like The Sodden Rat, and that in itself was most wise of them.

I widened my squint and looked around. Raven was nowhere to be seen. But on my swordarm side, buried amidst a mound of pink silk, I could see another familiar face. What in the Seven Hells was Her Highness Princess Miaqi-Tan Sera doing here?

We had had a brief audience with Her Highness two nights ago. She had summoned us to a secret meeting to discuss the possibility of her assuming her father's throne upon his death. There was one minor inconvenience, that being the older brother who stood between her and the throne. This was the problem that we were supposed to correct on her behalf.

We had turned the job down, with Raven summoning his most flowery and careful phrasing. It wasn't so much that we loved the idea of spendthrift, drunken and cruel Prince Herali on the throne as it was that we didn't think Miaqi could succeed in seizing her father's throne. "She lacks the requisite force of mind to slaughter her family and hold the throne once the deed was done," Raven had said thoughtfully when we were out of earshot. "Though I admire her enthusiasm."

I had agreed, with some regret. I was curious to see what would happen. But I had no great enthusiasm for turning assassin. Raven and I were mercenaries, soldiers, occasionally thieves out of necessity, but that was the limit of our skills. In any case, meddling in the affairs of the Sunborn generally caused one to wind up dead sooner rather than later. I had no desire to see the Lady's caves before my time either.

And yet, here she was again. Only this time, we were lying on the floor of the main room of the Rat and I had no memory of how either of us had gotten there. Or where Raven was. I dragged myself onto my hands and knees and crawled over to her. "Your Highness," I began carefully. "Your Highness, are you all right?"

One amber eye opened and gazed at me with a startling amount of recognition. It was oddly flattering. Normally, women noticed Raven and not me. At least at first. "Highness?" she croaked. "Nice to hear you giving me the respect I deserve, little cousin."

"Cousin?" I sat up and stared down at her. Raven and I came from minor nobility in the outlying provinces, but I was quite certain that we were not related to any of the court Sunborn. Perhaps it was some sort of affectionate term? Or a joke? I wished Raven was here. He was much better with delirious women than I was.

I tried again. "Princess Miaqi? Are you able to move?"

That seemed to revive her. Both amber eyes shot open and she sat up straight, an expression of pure horror twisting her normally pretty face. Her beringed fingers went to her round breasts, then swept downward over the lush curve of her hips beneath the silk of her dress. Something about that exploration seemed unexpected. "Seven Hells! What's happened to me?" She stared at me, wild-eyed.

"I'm not sure, Highness. I am surprised as you are to find myself here at your side." I pulled myself slowly to my feet. "I don't suppose you know where my cousin Raven is?"

It was worse than I thought. Princess Miaqi's quest for the throne had led to madness. Very sudden madness. Now what was I supposed to do? I was a fighter, not a nursemaid. "Perhaps I could fetch you some ale, Princess? Help you to sit up?"

"It's me, Maeve. Seven Hells, can't you tell that it's me?" Princess Miaqi's delicate tapered fingers buried themselves in her long black hair. I found that I wanted to do the same, consequences be damned.

No, Maeve, no. Do not entertain fantasies about the beautiful but unfortunate and clearly deranged Sunborn. Those lead to dungeons and beheadings. "Why don't you let me help you up to a bench?" I stood, still swaying a bit myself and tried to sound soothing.

Yes, he'd said that. And he'd said that he felt the same way about marrying me. We'd stolen my brother's swords and run away that night.

Now, it was my turn to look astonished. I hadn't left Raven alone with the Princess so he couldn't have told her about us. True, the scandal of our supposed elopement, then subsequent failure to marry, had been quite notorious for a time. In Tacred, which was the size of a farmer's field. That alone should have kept the news well away from Miaqi's ears. "Go on," I said at last.

"We ran away with me dressed in your girl's clothes because I was more believable as a maiden than you were. No one knows that except for me and you, right?" She was staring at me with a pleading expression in those golden eyes now. And she was right, I'd never told anyone else that story and guessed that Raven had not either, which left one other possibility...

"Raven?" I could hear the uncertainty in my voice. "Why do you look like Princess Miaqi?" Maybe it was just a glamour. Of late, my cousin was always looking for the chance to hone what magical skills he possessed. He must have been practicing and something went wrong. That was it. I leaned against a table and waited for a reasonable explanation.

This was going to end well.

And if it was true, we were in horrible, horrible trouble. I groaned and tried again to think through the haze that still filled my brain. We'd set out from Tacred to do great deeds

but somehow it hadn't worked out that way. A few days ago, I'd have said that we both needed a change, to do something besides sell our swords. But this was more of a change than I had in mind. A lot more.