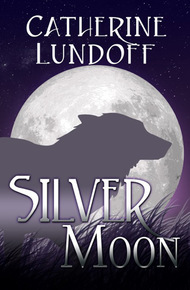 Becca Thornton, divorced, middle-aged and trying to embrace a quiet life, discovers that there are still plenty of surprises to be had when her menopause kicks in with bonus lycanthropy. And she's not the only one. The seemingly peaceful and dull town of Wolf's Point has its own all-female werewolf pack and Becca has just become its newest member. But it's not all protecting Wolf's Point, midnight meetings at the Women's Club and monthly runs through the woods. There are werewolf hunters in town and now they've got Becca and the Wolf's Point Pack in their sights.

As if that wasn't enough, Becca's cute lesbian werewolf neighbor, Erin, is starting to haunt her dreams as well as her doorstep. What's a newbie werewolf to do, between hot flashes, silver bullets and unexpected transformations? Can Becca overcome her fears and help the werewolves defeat their greatest enemy?

I think I may have giggled aloud when I first heard the premise for this novel: women in a small town become werewolves at menopause. And certainly Lundoff doesn't deprive herself of the amusement inherent in the idea. But as she explores the effects this monumental change has on divorced, drifting Becca Thornton, she raises some profound questions. What happens when you make invisible women — women wiped away by our culture's focus on permanent youth and beauty — visible and important? Is change inherently monstrous? What does it really mean to grow into one's power? And, finally and most importantly, what makes a monster anyway? – Melissa Scott

Becca Thornton's first hot flash came on suddenly and unexpectedly, superheating her body from head to toe until she was drenched with sweat. It propelled her off the couch and into the bathroom to splash cold water on her face. As the water dripped down her cheeks, she glanced at her tomato-like complexion and bit off a shriek.

There had been something new in her reflection, a flickering of golden eyes and fur, visible for the blink of an eye. Something feral and wild strained its way toward the surface behind her otherwise utterly normal features. What the hell? She closed her eyes, shutting out the hallucination or whatever it was.

Everything slowed down for a minute, as if this new wildness that lurked inside her was being locked back in its cage. When she looked again, there was nothing new and terrifying to be seen. Her own face, round and furless, stared back at her, brown eyes startled but perfectly ordinary. It was a face like that of any other woman of a certain age in a one-horse town like Wolf's Point. For a moment, she wondered if this gradual softening and rounding of features, this planing away of the sharp edges, was what they all had in common.

But the thought was overwhelmed by a second, milder flash. Becca lurched outside and dropped onto her porch swing, the fan in her hand trying to supplement the tiny morning breeze. She rocked slowly back and forth and cursed turning fifty, but silently so that the neighbors wouldn't notice. Here in Wolf's Point, they noticed quite a bit from what she'd gathered.

Across the street, her neighbor Erin walked out on her porch and Becca gave her a half-hearted wave. Just her luck, Erin waved back then started over. This wasn't going to help cool her down much, that was for sure.

Erin wasn't like the rest of the townsfolk, at least as far as Becca was concerned. She'd only been Becca's neighbor for about two years, which made her a little exotic by itself. Most of the other neighbors had been there forever. While Becca hadn't asked, she assumed that like her, Erin had married into Wolf's Point, then lost her husband somewhere along the way and bought a house on a quiet street outside the downtown hub. Wasn't that what single women of a certain age did with themselves once their husbands were gone, one way or another?

But regardless of how she came to be there, just talking to Erin made Becca feel different, kind of shy and squirmy inside. It was weird; she hadn't had trouble talking to anyone or even speaking in front of an audience for ages now. Everyone said she was the one of the best speakers at the Wolf's Point Women's Club. After all, she'd been doing that kind of stuff since Ed dumped her two years ago.

That, of course, sent her overheated brain spiraling off into thoughts about her ex. She and Ed had met at a bank in the city where she worked as a teller and he was trying to get a loan. After they got married, they'd moved around the country while he worked at too many sales jobs for her to remember and she worked at whatever was available. It had been a mostly good fifteen years, though she had missed settling down and really building a home, maybe raising a family.

Then they moved to Wolf's Point and everything changed. Ed decided his life was incomplete unless he got himself a twenty something blonde and a sports car and that, as they said, was that. She wondered if it made him feel any younger. Good luck to him and his trophy bimbo she thought contemptuously and smiled at how little the thought bothered her anymore. It had been a long time coming, but it felt good to be leaving him like so much baggage on the side of the road, just like he'd done to her.

Erin arrived on the heels of her smile. "Hey there. Pretty hot out this morning, huh?" She grinned the slow lazy smile that always made Becca think about cowboys. Cowgirls. Whatever. Maybe it was her neighbor's long lean body or her short-cropped graying hair. Or the slow way she talked, like she'd just ridden in off the range. It wasn't too much of a leap to picture her on horseback.

Becca dragged her mind back to the present and gave herself a stern mental admonition to stop daydreaming. "Yep. And I'm even hotter on top of that." She rolled her eyes and fanned faster, like that was going to help. It wasn't quite what she meant to say but she figured it would pass without comment.

It didn't. Erin raised an eyebrow and cocked her head to one side like a big dog. "No question about that. Or am I missing something?"

Becca felt a flush paint her cheeks and nearly hid her face in her fan just like an old-time court lady. But, of course, Erin hadn't meant anything by it. Not like there was anything to mean for that matter. Who'd say something like that about her middle-aged dumpy self anymore?

"I'm...extra warm today. I seem to be coming up on the 'Change'," she mumbled finally when she realized Erin was still waiting for an answer. She could almost hear the word spelled with a nearly invisible capital letter "C."

Erin's grin turned a little strange, as if her face was somehow longer than it should be. Becca blinked and tried to convince herself it was just a trick of the morning light. Her neighbor's face looked normal enough when she looked back up: broad cheeks, silvery gray eyes with a hint of blue, cheerful grin exposing slightly crooked teeth.

"Well," Erin said at last, "this calls for a celebration. We usually hold a little party down at the Women's Club when that time of life comes around for one of our members."

"News to me. No one ever said anything about it before. This one of those Red Hat things?" Becca scowled. Why would Erin know something like this when she didn't? After all, she'd been a member for two whole years, for God's sake, a whole year longer than Erin, as far as she knew. She was even in the running to be Club Secretary in the next election if all went well. But she'd be damned if she was putting on a red hat and a feather boa, no matter how much fun everyone else said it was.

Erin grinned a little wider as if she was imagining Becca in the hat and the boa. Becca wondered what else she was wearing in the other woman's imagination and flushed even more. Now, where had that notion come from? This day got any weirder and she was going to need to go over to the clinic for a checkup.

Erin's voice cut into her thoughts, "Nope. Can you really see me in a red hat, much less a boa?" Becca glanced at her scruffy plaid shirt and jeans and shook her head. Erin went on talking, "We just get together, have some cake and a margarita or two and talk about some of the things that made life easier when we first started going through that time of life. Don't spread the word too far though; we're trying to keep the youngsters out until they're old enough to relate." She winked, a slow sensuous gesture that made Becca smile despite herself. Erin continued, "Your schedule pretty open Friday night? We like to run a little late on these things."

Becca raised an eyebrow but nodded anyway. She was trying to picture the older members of their little club staying awake past nine and so far it wasn't working. But maybe she didn't know them as well as she thought she did. Erin made another comment or two about stopping by to pick her up on Friday, then took off.

Becca made herself not watch her walk away, the fact that she wanted to do just that surprising her more than anything else that had happened so far this morning.