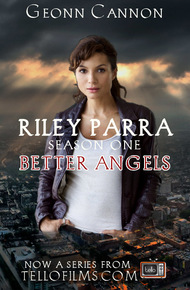 Riley Parra is a good cop in a corrupt department who discovers a war between angels and demons is being waged in her city. Both sides have chosen mortal champions, and Riley is the only chance the Good side has of winning. Riley has never been a religious person and believes there are reasons to doubt the truth of either side, but she's willing to fight to the death to protect the woman she loves.

"Down these mean streets a [wo]man must go who is not [her]self mean…" Riley Parra is the sort of protagonist who melts my defenses: a tough, street-smart cop trying to bring some small measure of justice to an impossibly corrupt world. I would have happily followed her exploits without the added complications of a war between heaven and hell — Cannon is pitch-perfect here, turning familiar noir tropes into something with real emotional depth, and using the literal war between good and evil to remind readers what the stakes really are in the best of noir. The supporting cast is equally well-drawn, and the nameless city takes on a life of its own. It's no wonder that Tello Films has turned the books into a webseries! – Melissa Scott

She stepped into her bedroom and saw the blonde man sitting with his back to the bed. His legs were spread in front of him, his head bowed and his left hand still clasped over his chest. He wore khakis, a light blue shirt, and - now that she saw him clearly - his hair was white, not blonde. The tail of his trenchcoat spread out underneath him like a cape. Riley was two steps away from him when he suddenly looked up at her.

She gasped and backed up, raising her gun again. "Don't move."

The black object was next to his hand. Riley stepped forward and swept it away with her foot, seeing too late that it was just a wallet. She cursed under her breath and said, "I'm going to get you some medical attention.

The man said, "There's no need for that." He held out his hand to show that there was no blood. The hole in his shirt was also clean.

Riley frowned and kept her weapon trained on him. "What the hell?"

She nodded and stepped back, out of arm's reach as he used the bed to push himself up. He groaned and stretched. "God. It doesn't kill, but it hurts like a son of a bitch."

"Who are you? What are you doing in my apartment?"

"I'm here to tell you not to give up. As for who I am, well... that's a little more difficult to explain."

"My name is Samael. I was on the waterfront two evenings ago when my friend perished."

"Your friend. You know his name?"

"Indeed I do. His name was Ridwan."

Riley raised an eyebrow. "Uh-huh. And the man you were meeting with?"

Samael stepped forward and Riley raised the gun again. He held his hands out and said, "I apologize. The man we were meeting with. I believe he is the reason you were brought into the investigation, Riley Parra. You know him. His name is Marchosias, and he was the man who threw you off a roof four years ago. And Ridwan was the man who saved your life."

"Ridwan, Marchosias... what are you guys, some kind of weird religious cult?"

Samael smiled and said, "Well. I suppose you could say that." He took off his trenchcoat and let it fall to the floor. Riley lowered her weapon and let it hang from slack fingers as she watched his wings spread out. They were enormous, ten feet from one end to the other.

"Marchosias is a demon," he said. "And Ridwan was an angel."