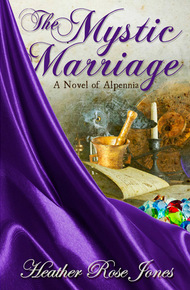 Antuniet Chazillen lost everything the night her brother was executed. In exile, she swore that treason would not be the final chapter of the Chazillen legacy in Alpennia's history. A long- hidden book of alchemical secrets provides the first hope of success, but her return to the capital is haunted by an enemy who wants those secrets for himself.

Jeanne, Vicomtesse de Cherdillac is bored. The Rotenek season is flat, her latest lover has grown tediously jealous and her usual crowd of friends fails to amuse. When Antuniet turns up on her doorstep seeking patronage for her alchemy experiments, what begins as amusement turns to interest, then something deeper. But Antuniet's work draws danger that threatens even the crown of Alpennia.

The alchemy of precious gems throws two women into a crucible of adversity, but it is the alchemy of the human heart that transforms them both in this breathtaking follow-up to the widely acclaimed Daughter of Mystery.

I've always loved Ruritanian romances, adventure stories set in imaginary Central European kingdoms, and Jones breathed new life into the genre with her first Alpennia novel, Daughter of Mystery. In The Mystic Marriage, she turns her attention to a new protagonist, the alchemist Antuniet Chazillen, who is determined to restore her family's honor. Jones has created a complicated and believable kingdom, complete with its own complex magics, and reveals it to us entirely through the eyes of its women — lovers and rivals, friends and enemies, alchemists and adepts and nobles of the royal court. It's still rare to find a novel in which the cast is so entirely and unabashedly female, and lovely to find an author who chooses to show those women as people complete in themselves. Oh, and there's a romance, too. – Melissa Scott

There were days when she became so lost in the work that hours passed without noticing. This was not one of those days. The click and tap of the tools could only be drowned out by the recited verses that enhanced the materiae as she measured and mixed. Hunger was only driven away by the other ache. The corner of the room where Jeanne worked was ever in her awareness, tugging at the edges of her vision. When the tapping stopped, the silence echoed with her heartbeat. She paused in beginning to clear away the jars of materiae. Chair legs scraped across the stones, tearing the silence. She felt, rather than saw, Jeanne standing at her side and looked up at last. "What do we have?" Her voice creaked a little from long disuse.

"I think this is all of them," Jeanne said. "It was hard to clean the small ones completely. Six green, none larger than a pea. Two are something of a muddy brown; you didn't say what you wanted done with them. Only one true red but it's the largest."

Antuniet picked up the crimson stone and held it against the light from the window to check the clarity. No fractures or bubbles. No hazy patches where the fibers were misaligned. It was warm between her fingers and she could feel herself bending to the power it carried: softening, yearning. Her own art betrayed her. She shook off the influence. "There you are," she said bitterly. "Red jasper to cure pains of the heart and ensure love returned. Pure, perfect, flawless…and utterly false."

"It isn't false," Jeanne countered with quiet intensity. "It was never false, but it's never pure. That's where the poets lie to us. We're all of us impure mixtures and flawed gems." She snatched the jasper away and held it up. "There are no pure feelings. How can there be honor without the pride in keeping it? What does love mean without the courage to follow it? Bravery without wisdom is folly. Loyalty can't be only a fishhook on a slender line; it must be a thousand tiny stitches binding one heart to the other."

With a sudden swift movement she took up one of the empty crucibles from the bench and started scooping minerals into it from the open jars. "There's love; that's true." Five large scoops of the first and the jasper thrust into the midst of it. "But there's vanity as well." A spoon from the second. "And jealousy." A dusting from a smaller jar. "There's memory of loss and dreams unrealized. There's fear." She stirred the powders roughly with one of the small chisels that still lay on the tray. Traces of the colors swirled through the mixture like eddies in the river. "And there's pain." With a sudden movement she jabbed the chisel's tip into her finger and watched the drops of blood well up and fall. "There's always pain. It doesn't matter that it's often by my own hand." Jeanne thrust the crucible toward her.

Antuniet took it by reflex and Jeanne wrapped cold hands around her own to keep them there. "This is my heart: it is what you see. I don't know if it will come through the fire. But it's yours, if you will have it." Her voice was rough and low. She turned away abruptly and strode out of the room. The clatter of the door latch punctuated her departure.