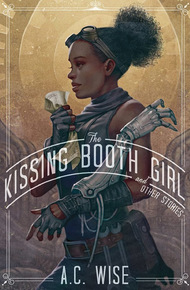 The Kissing Booth Girl and Other Stories by A.C. Wise

"Ladies and Gentlemen: I give you the Kissing Booth Girl! Lips that beguile. Oh, I promise, the nearest thing to nuzzling an angel can be yours—today!—for a shiny round Seated Liberty I know you carry in your very pockets as I speak." But to mechanically-inclined Beni, is the ethereal girl who fell from the sky a wish come true or false hope for life beyond the confines of the odd carnival called home. Her story—as well as tales of an order of deep-sea diving nuns caring for a sunken chapel and a high school boy asked to prom by the only dead kid he's ever met—can be found in A.C. Wise's newest collection of the fantastical, the weird, the queer and the poignant.

A beautiful and complicated collection of stories that circle around questions of identity and agency. Wise's range is impressive — there are steampunk stories here, and straight-up SF, and several varieties and variations on fairy tales, including a hardboiled noir version of Cinderella, and if you've read her earlier The Ultra Fabulous Glitter Squadron Saves the World Again, you'll be hard pressed to recognize the author as the same from style alone. But these stories contain the same complicated understanding of self and self-creation, spread across more than a dozen different worlds. The language alone is extraordinary, and it's married to a depth of story that can only delight. – Melissa Scott

The day she meets Juliet, Juliet(te) changes the spelling of her name. It's a simple act, but it's monumental at the same time. It sets her apart and makes her part of something larger. Juliet + Juliet(te) = forever and irrevocably changed.

That's what love (though neither of them has used the word yet) does: it changes you. For instance, when Juliet first sees her she finds herself considering what Juliet(te)'s mouth will taste like. And Juliet(te) finds herself considering the way Juliet's hands will feel resting on the curve of her waist. For the rest of the night, they are no longer separate people, they are satellites orbiting each other, constantly succumbing to the pull of gravity and drifting ever closer to their moment of impact.

On the day she meets Juliet(te), Juliet is mooning over a girl named Rosa who won't even give her the time of day. Just when she's decided she's done with love, she spots Juliet(te) across the room, and the whole world flips upside down. The music in the club at the resort where they're both spending spring break thumps blood hot. Bodies pack tight, sweat-slicked and scattered with broken light. For one split second, they all stop.

Juliet doesn't give herself time to doubt or regret. Rosa? Who's that? Juliet crosses the packed club, takes Juliet(te)'s hand, and discovers her mouth, in fact, tastes like salt and lime from the tequila shots she's been pounding.

Juliet puts her hands on Juliet(te)'s waist, and they both agree without saying it aloud that they're not going to think beyond this moment. Not until last call, last dance, and the moon rolling over the horizon into dawn. They're young, and forever isn't a word in their vocabulary.

When the sky finally starts to pink, Juliet takes Juliet(te)'s hand again and leads her outside to see the last of the stars. After the heat of the club, everything is silent and still. There's a little path winding through the sea grass that leads them to the dunes over-looking the beach. In the not-quite-dawn, the sand is silver-grey and the water is the restless color of a bruise.

Breeze whips her long red hair into a comet's tail. Juliet's hair is stiff-dyed spikes of darkness, somewhere between black and blue. Willowy Juliet(te) wears a tank top and cut-off shorts. Stocky Juliet wears a button-down shirt with the sleeves rolled, and laced-up boots scornful of the sand.

A single star shakes loose of the firmament and streaks across the sky. A moment later, a second star falls in the opposite direction.

"What do you want to make of this one, then?" Juliet(te) asks, smiling a little sly. She's already made a wish of her own, and she holds it close to her heart, never speaking it out loud.

"A race," says Juliet, squinting a little bit against the rising sun. She's slightly drunk, but mostly sober, though the world is blurred at the edges.

"Anywhere and everywhere. To the past, to the future. Let's see where the moment takes us."

This time, Juliet(te) takes Juliet's hand. "Let's start with to the water." She doesn't wait for an answer. They charge the edge of the dunes. They jump. And hand in hand, they run.

None of this can end well. They know it in the core of their beings. The fate dictated by their shared names (even though Juliet doesn't believe in fate) says one of them must die, if not both of them. Because that's what happens to girls in stories. That's what happens to girls who love girls, and sometimes girls who love boys, or boys who love each other, and even the rare people who realize that labels and names are passé.

Juliet(te) asks Juliet about it as they sit on the beach, sipping frozen Margaritas through pink plastic straws. They've been up all night, extending their just-for-now, getting around to talking about the similarity in their names and classic English literature at roughly noon. Juliet snorts.

"You think we're the reincarnation of ancient doom, fated to play out some sad-ass love story with a bullshit end?"

Juliet(te) is a little embarrassed by Juliet's scorn, but she doesn't back down. "Could be," she says, slurping and looking sadly at the bottom of her empty glass.

"Fuck that noise," Juliet responds. "I don't roll that way."

Juliet(te) looks up; a grin spreads slow. Hope blooms somewhere in the center of her chest, making her limbs warm in a way that has nothing to do with the intensity of the sun. Juliet's jaw is set, her eyes on the horizon.

"Amen!" Juliet(te) says. She jumps up and punches Juliet on the arm; her heart beats harder still. She's never dared not to believe in fate before. "So what do we do instead?"

"We do better," Juliet says. "The day is young and ripe for adventure. We'll build a time machine. Jump to a different world. Jump to all of the worlds. We'll run away."

"You serious?" Juliet(te) asks. She's feeling a little drunk. The tequila is playing catch-up. Her lips still feel frosted salty-sweet from the night before.

Juliet thinks about it. "Why the hell not? Stranger things have happened."

"Fuckin' A!" Juliet(te) punches the air. "Not forever," she adds, in case her enthusiasm scares Juliet away. "Just for now."

"Just for now," Juliet agrees, though she means it a little less than she ever has before.

"Fuckin' A." Juliet borrows the phrase from her lover's mouth, liking the way it tastes on her tongue.

Juliet rigs electric switches and dials, geegaws and doodads. She doesn't know anything about building time machines, but how hard can it be? She knows everything about tearing down and rebuilding motorcycles, after all.

When the time machine is primed and ready to go, Juliet(te) does her make-up in the not-mirror of Juliet's face. She smears her cheeks with glitter and her eyes with kohl. She stains her lips improbable shades, colors that linger in the cracks of her chapped skin. Juliet welds neon to the soles of her boots so they flash and shine, space-pirate-style.

"Fuckin' A," Juliet says, and throws the switch.

They hurtle through space, out past the rings of Saturn. They hurtle through time to a when where humans and aliens live side-by-side among the stars. They dock their improvised time machine on a space station with a thousand kinds of life speaking a thousand languages they don't understand. They find a part of the station that doesn't spin, and in zero-g, they fuck for the first time. They learn the ways their bodies fit together, and the ways they don't. They laugh as they crash into each other, and crash into the walls, getting it right more often than they get it wrong.

When they're good and bruised, happy and sore, they web themselves in a hammock tethered to the wall. They feed each other dishes they don't recognize, coming up with their own names for the alien spices that stain their fingers strange hues.

"Where next?" Juliet asks, drifting on the edge of sleep.

Part of her never wants to leave. This future is too perfect - and it still counts as just for now when you have a time machine. It's not even tomorrow yet, Juliet thinks. That makes it okay to think about falling in love.