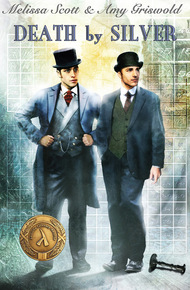 Amy Griswold is the author (with Melissa Scott) of Death by Silver (winner of the Lambda Literary Award and Spectrum Award) and A Death at the Dionysus Club. She has also published six licensed tie-in novels for the Stargate: SG-1 and Stargate Atlantis series from Fandemonium books. Her short fiction has appeared in magazines and anthologies including Fantastic Stories of the Imagination, Mothership Zeta, and Women in Practical Armor. Her story "Ratcatcher" will appear in Wilde Stories 2017: The Year's Best Gay Speculative Fiction.

Death by Silver by Melissa Scott and Amy Griswold

Newly established metaphysician Ned Mathey can't afford to turn away any clients. But the latest Londoner to seek Ned's magical aid is enough to make him hesitate: Mr Edgar Nevett, arrogant enough in his own right, is the father of the bully who made Ned's life hell at boarding school. Nevertheless Ned accepts the commission ensure that the Nevett family silver bears no curses, ancient or modern, certain that his greatest worry will be persuading Nevett to pay his bill in a timely fashion. But then Edgar Nevett is killed by an enchanted silver candlestick — one of the pieces Ned declared magically harmless.

Calling on his old school friend Julian Lynes — private detective and another victim of the younger Nevett — Ned races to solve the murder, clear the stain on his professional reputation, and lay to rest the ghosts of his past.

Assisted by Ned's able secretary Miss Frost, who has unexpected metaphysical skills of her own, Ned and Julian explore London's criminal underworld and the haunts of gentlemen who favor other gentlemen, uncover secret and scandals, and finally confront the mystery of their own relationship.

The spark that became Death By Silver was struck over a catalogue picture of a full set of Victorian silver tableware. "Imagine fitting all of that on a table." "Imagine polishing it." "Imagine what their magic system would have to be like…" The late Victorian period was full of complex social rules in part because society was changing, and it was irresistible to use that period to explore both the effects of "scientific" change — through the magic — and social change, through the experiences of two young gay men just beginning their careers. – Melissa Scott

The bell jangled at the front door, and Julian went to his window, peering out just as a cab pulled away from the curb. A client, then, either for him or Bailey, and he swept the most recent Newgate Calendar off the chair he kept for clients. There wasn't time to start more tea, but it was a little late for that anyway. He heard footsteps on the stair, and then young Digby knocked at his door.

"Come in," Julian called, and the door swung open, Ned looking at him with a faintly sheepish expression as he swept off his top hat.

"I hope I'm not interrupting anything."

"Not at all," Julian said. He gestured vaguely to the various chairs. "Make yourself at home. Oh, Harry." He reached into his pocket. "Run down to the General and bring us back a pitcher of ale."

That's the best offer I've had all day," Ned said, and set his hat cautiously on top of the pile of newspapers.

Julian pushed the front window further open, bringing in the smell of the street, dust and horse droppings and half a dozen kitchen stoves, as well as a breeze that promised a cooler night. He opened his bedroom door as well, hoping for a cross-draught, and turned back to Ned.

"What would you think if someone said to you 'Corinth five'?" he asked.

Ned blinked. "Well, Corinthian's running in the fifth at Cheltenham. Why?"

"Oh." Julian had hoped for something a bit more interesting that a message from a bookmaker. "Is he the favorite?"

Ned's voice took on the note of patience that meant he'd failed to noticed some important piece of the sporting life. "Yes. Three to two is about the best you can get on him right now."

"Oh," Julian said again, and shrugged. "I was working out a cipher in the agony column, but it's probably just a bookmaker laying off some of his bets."

"Or else it's one of those sporting lads who purport to sell you a secret tip, and pot it to the paper in cipher to make it seem more important," Ned said. "And by the time the punters have deciphered it, the lad in question is long gone." He paused. "You really hadn't heard of Corinthian?"

Julian shook his head. "Why would I?"

"Most people have," Ned answered. "Even Miss Frost."

Julian sighed. "She's probably secretly sporting-mad, you know. And — didn't you say something about a match this afternoon?"

"I had a client instead," Ned said.

And not a nice one, by the shift in tone. Julian glanced at the clock on the mantel — late enough that there was little chance of any clients of his own — and shrugged off his coat. "Make yourself at home," he said, and Ned smiled.

"I don't mind if I do." He hung his frock coat carefully on the tree by the door and loosened his collar. "Victor Nevett's father hired me to inspect his silver for a curse today."

Julian checked just for an instant at the name, then finished loosening his tie. He was pleased that his voice stayed light and controlled. "Don't tel me Victor recommended you. He hated both of us."

Damned if I know," Ned said. "Nevett mentioned that I was at school with him, so — I've no idea. The only thing I can tell you for certain is that there's no curse on the family silver."

"That surprises me," Julian said. "I'd have thought people would be lining up to place curses on the Nevetts."

Ned grinned at that. "I think he felt he was important enough to have one, certainly. Apparently no one else agreed."

He went on with the story, and they were comfortably at liberty by the time young Digby returned with the ale. Julian gave him an extra sixpence before closing the door behind him. After a moment's hesitate, he locked it, too. He should know better, but — he'd never had any sense where Ned was concerned.