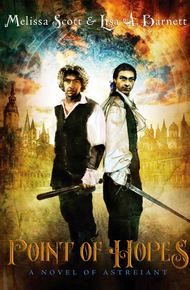 Lisa A. Barnett was born and raised in Dorchester, Massachusetts, attended Girls' Latin School, and received her BA from the University of Massachusetts/Boston. She was a senior editor at Heinemann, where she developed her own line of theatre books She edited plays, monologue collections, and practical theatre books, as well as a second line of books on theatre in eduction, which included a string of award-winning titles.

As a writer, she worked primarily in collaboration with her partner, Melissa Scott, and together they produced three novels: Point of Hopes and Point of Dreams (Lambda Literary Award winner 2002), both set in the imaginary city of Astreiant, and The Armor of Light, set in an alternate Elizabethan England. They also produced a short story,"the Carmen Miranda Gambit," published in the 1990 collection Carmen Miranda's Ghost is Haunting Space Station Three. Outside of the collaboration, she had a pair of monologues published in the collection Monologues from the Road, and subsequently saw them produced as part of an evening of "theatre from the road."

Barnett died May 2, 2006, of a metastatic brain tumor resulting from inflammatory breast cancer. She was 47.

Point of Hopes by Melissa Scott and Lisa A. Barnett

It is high summer in the royal city of Astreiant, and everyone is bracing for the influx of goods and people that accompanies the Midsummer Fair. For pointsman Nicolas Rathe, this means a familiar pattern of extra work, as he copes with pickpockets and runaway apprentices on top of his usual peace-keeping duties. But this year, more children than usual have gone missing, more than can be explained by the usual temptations of adventure and homesickness. Rumor says they are being stolen, and certainly they are vanishing without a trace. And they are almost certainly still alive, though that adds to the mystery. The city's necromancers have not touched their ghosts.

To complicate matters, Astreiant's citizens have another good reason to be anxious: theirs is a world ruled by the stars, and the current configuration of the heavens portends political upheaval, possibly including the death of the ruling Queen. People across the city are restless, angry and frightened, ready to turn on any strangers in their midst — including the paid-off mercenary soldier Philip Eslingen, currently working as a bouncer at one of the taverns in Point of Hopes. He and Rathe strike up a wary friendship, but they are both aware that time is running out if they are going to find the missing children before the city erupts into violence.

When Lisa and I started plotting Point of Hopes, our primary goal was to write a fantasy/mystery story that played fair by both genres' rules. We wanted a mystery that could only be solved if the magic made coherent sense, and at the same time one in which the mechanisms of legal justice were still being invented. And that led us to the city of Astreiant, a little like London or Amsterdam in the 1600s, except that astrology works, women dominate politics and the economy, and a pointsman — a sort of policeman — and an out-of-work mercenary have to work together to defeat forces that could tear the city apart. – Melissa Scott

"Oy, Nico!" That was a new voice, and he turned to see LaSier striding after him, her long hair flowing behind her like a horse's tail. "Wait a minute."

Rathe paused, suppressing the instinctive desire to put his hand on his purse, and LaSier fell into step beside him. She was younger than he by a year or two, slim and pretty, with a gait like a dancer.

"This butcher's girl," LaSier began, "she's not the only child who's gone missing who shouldn't."

"Oh?" Rathe stopped, already running down he list of missing persons they'd received from Point of Sighs. Not that that was always reliable, as every station guarded its prerogatives and points jealously, but he couldn't remember anything out of the ordinary. Runaways, certainly, and more than there should have been, or usually were, but nothing like Herisse.

LaSier made a face, as though she'd read his thoughts. "It hasn't been reported, I don't think. But there was a boy here, learning the trade, and he went out to the markets to watch the crowds and he never came home."

"No one made a point on him, then" Rathe asked, already knowing the answer — if it were that simple, the Quentiers wouldn't be worrying; prison was an occupational hazard for them — and LaSier spit on the dust at her feet.

"We checked that first, of course, though he'd been here just long enough to learn how much he didn't know, and I didn't think he was stupid enough to try lifting anything on his own. But he's not in the cells at Point of Sighs or anywhere southriver. And I'm worried. Estel's worried."

There was no need to ask why LaSier or Quentier hadn't gone to Point of Sighs with the complaint. The Quentiers had always kept a school or sort for pickpockets, their own kin and the children of friends and neighbors — Rathe sometimes wondered if there were some secret, hidden guild organization for illegal crafts — and he wasn't surprised to hear that Estel was keeping up that part of the business. But she would have no recourse when one of her "students" disappeared, not without giving Astarac, the chief at Point of Sighs, an excuse to search the 'Serry and in general look too closely into Quentier business. "Are you making an official complaint to me?"

LaSier shook her head, smiling. "If it were official, we'd've gone to Point of Sighs, they're the ones with jurisdiction. But I thought you ought to know. He didn't have any place to run, that one. Gavaret Cordiere, his name is, his family's from Dhenin."

"Would he have run back to them?" Rathe asked. "If he — forgive my bluntness, Cassia — if he decided he didn't like the business after all?"

"It's possible," LaSier answered. "But I don't think he did." She smiled again, a sudden, elfin grin. "He liked the trade, Nico, and he had the fingers fort. I'd've put him to work soon enough."

Rathe sighed, and reached into his pocket for his tablets. "I'll make inquiries northriver, if you'd like, see if he's in cells there. And you might as well give me a description, in case — anything — turns up."

A body, he meant, and Easier grimaced and nodded in understanding. "He's fourteen, maybe shoulder height on me, dark skinned — not as dark as me, but dark enough — brown hair, brown eyes. There's a touch of red in his hair, maybe, and it's curly. He cut it short when we came here, he looks like any apprentice."

"Your stock in trade," Rathe murmured.

"Exactly." LaSier squinted, as though trying to remember, then shook her head. "That's about all, Nico. He's a bright boy, button memorable looking."

"I'll keep an eye out," Rathe answered, and screwed the last note on the face of the tablet, stylus riffing into the wax. He was running out of room on the second page: not a good sign, he thought, and folded the tablet closed on itself. "And I'll check with the cell keepers northriver. Would he give his right name?"

"I'll get descriptions, too," Rathe said.

Rathe nodded, oddly touched by the offer. Besides, this was the kind of fee that he didn't refuse, the trade of favor for favor within the law. "I'll bear that in mind, Cassia, thanks. But let's see what I find out, first."

"Agreed," LaSier said, and turned away. She called over her shoulder, "See you at the fair!"

"You'd better hope not," Rathe answered, and started back toward Point of Hopes.