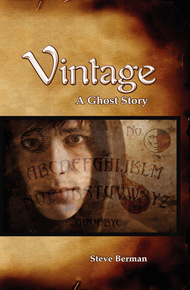 Steve Berman has long been involved in queer speculative fiction. He has been a finalist for the Andre Norton Award, Golden Crown Literary Award, Lambda Literary Award, and the Shirley Jackson Award. He has edited more books of LGBT spec fic than any other individual, living or dead.

In a small New Jersey town, a lonely teen walking along a highway one autumn evening meets the boy of his dreams, a boy who died decades ago and haunts the road. Awkward crushes, both bitter and sweet, lead him to face youthful dreams and childish fears. With a cast of offbeat friends, antiques, and Ouija boards, Vintage offers readers a memorable blend of dark humor, chills and love.A finalist for the Andre Norton Award! A recommended title on the GLBT Round Table of the American Library Association's Rainbow List for gay teens!

A confession: I hated high school, and usually refuse to revisit it even in fiction. Vintage is the grand exception to that rule. Berman hangs his story off a ghost story that's become an urban legend, and proceeds to make it into an amazing tale of loss and love. I love the narrator and his best friend Trace and their determination to make something weird out of their otherwise ordinary town; I love that when they find that weirdness, and it's even more complicated that they had imagined, they still embrace it. I also love this for the writing: Berman's voice is pitch-perfect for the sensitive high school boy who is speaking, and at the same time there are bits of heart-stopping loveliness. This is still my first choice when someone asks me if I can recommend a good queer YA novel. – Melissa Scott

My eyes opened and I trembled at the whisper in my ear. There was more than a draft in the room with me. Or else the long hours, anticipation, and disappointment had left me exhausted and I couldn't trust my senses or my desire to see him again. I crawled to the foot of the bed. I was afraid to speak out, worried that I might be answered.

At first my eyes saw only the gloom. But a faint glow grew in a corner until I could see a pale figure standing there. The ghost of the boy from the highway took a tentative step closer. My heart beat faster though I wasn't sure if it was with fear or desire.

"Thank you." I could not believe I said that, even though I knew the reason he was there was because of me. For the first time in my life, I had been pursued, wanted.

I watched as he made his way to my bed. Even without much light, I could see him in detail: The sheen of Brylcreem left his hair looking wet. The way his chest filled the sweater with such promise. A slight scuff at the tips of his penny loafers. I could not stop looking at him. Knowing the risk he might suddenly disappear forced me to etch every little feature of his into my brain.

When his hand fell upon my bare arm, the feather-weight touch felt cool and set off a chain reaction of wondrous shivers through me. I fairly moaned as his fingers traced back and forth, from my elbow to my wrist.

As he touched me his voice became stronger. "I need to talk to you."

He took so long to speak again, I grew worried.

"Everything's different." He looked around my room. "This is your home?"

I nodded. It would have been too confusing to tell the truth.

"I think… I think I haven't been home in a long time." He nodded once. "I remember leaving the party. Not much else.

But I never seem to come home. I'm always walking. I'm always alone." He looked straight at me, and I could see deep into his eyes, see my reflection in those ice-blue mirrors.

"I understand." I knew loneliness, the fear of being pushed away, of being left behind, of having no one.

"I hope you do." He stepped nearer. I moved back and he came even closer. "I want to stay with you."

That short-circuited my mind for a few moments. All I could think of was my aunt's reaction if I told her a ghost followed me home. And, oh yeah, we're both hot for each other, so don't mind any sounds you might hear behind closed doors.

I never answered, because he took one more step toward me and then vanished. A quick fade away to nothing, leaving me trembling and cold.