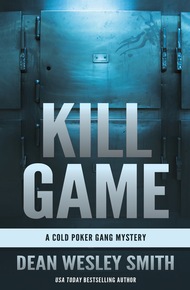 Retired Detective Bayard Lott hosts the weekly poker games at his home. The group calls themselves the Cold Poker Gang. And they succeed at closing old cases.

From that simple suggestion spins one of the strangest and most complicated murder mystery puzzles the gang has ever seen.

Dean Wesley Smith paid his way through college by playing blackjack teams. Off and on, he paid his mortgage by playing professional poker. The only reason he doesn't live in Las Vegas is because his wife (ahem: me) hates the desert and the 100-degree nights. So, he explores Las Vegas in his imagination in a number of his book series. The Cold Poker Gang series features retired Vegas detectives who discuss cold cases over their weekly poker games. Oh—and the gang solves the cases too.

I read a lot of mysteries and often get disappointed when I figure out what's what midway through the book. I love this series because Dean's always 50 steps ahead of me, throwing in twists that I least expect just about the point when I'm thinking I know what's happening.

Kill Game is the first book in this series. You'll want to read all of the rest of them as well. – Kristine Kathryn Rusch

THE IDEA JIM HAD on a warm early-summer evening was to find the rumored place for afterhours dancing called "The Path." Jim had just graduated high school, the proud class of 1992. He was headed next year to Stanford, full academic ride, and he was really looking forward to getting out of the desert in a couple months. He had been born and raised here and was excited about living somewhere else. Anywhere, actually.

Jim stood barely five-nine, had long brown hair, and a moustache he was doing his best to grow and mostly failing.

Sharon, his girlfriend over the last six months, also now graduated, wasn't happy he was going so far away. She had been offered a scholarship at UNLV and had taken it. So between them there was a tension of the coming split.

Sharon was actually taller than Jim, with long blonde hair and skinny legs that seemed to always be stuffed into jeans a size too small. She had also done some light modeling and as she aged, she just got better looking.

Jim had no idea what she saw in him, but they always had such a good time together. They had two hobbies: Dancing and having sex in every place they could imagine or risk.

Tonight they were thinking of doing both at the same time. They had heard how really crowded the dance floor at "The Path" could be. Sharon had suggested, with a smile, that it might be fun to try a little "fooling around" on the floor while dancing.

Jim was game if she was. With Sharon, he would try just about anything. Logic often never played a part.

So they parked down on Paradise Road, about two blocks from the club, and headed down the sidewalk along the row of low warehouses, holding hands and laughing, the coming separation only a distant thing to ignore on such a wonderful spring night.

The club had an entrance off an alley into a large warehouse, but until two days ago, on Sharon's birthday, both of them hadn't been eighteen and old enough to get in, so they hadn't tried to find it.

Paradise had street lights and even though the area felt rough, both of them were native to the city and knew this really wasn't a bad area. They were as safe as they could be at midnight in Las Vegas.

Cars lined the street on both sides, so they knew they were in the right area even though they didn't know exactly where the club was. And between traffic on the street, if they listened hard, they could hear the pounding beat of the music echoing through the one-story buildings of the area.

"Maybe it's down here?" Sharon asked, pulling Jim into the first alley they came to.

Jim could tell at once they were in the wrong place.

And then the smell hit them.

The putrid smell of something rotting in the heat. It was a cloying smell that seemed to make the air thicker than it actually was, and fill every sense. It turned his stomach instantly. He knew it was a dead person instantly. He had smelled that before. He had no idea how police who worked around dead bodies ever got used to the smell.

"What is that?" Sharon asked, stopping and covering her mouth and nose. After a moment she started to back toward the street, her eyes round and her skin pale.

Jim stood his ground. He had been with two friends last year up on Lake Mead when they found a floater near the shore. He knew that smell. Someone had died.

But there was no body in the alley. Just walls of warehouses. Not even garbage cans.

He stepped toward one wall and the smell decreased.

"Jim, get out of there," Sharon said from the sidewalk behind him.

He motioned to her that he would be right there, then stepped toward the other wall. Originally a white stucco wall, it was now stained with years of grime and lack of paint that he could see even in the dark shadows.

And the smell got much worse.

There was no door in the wall, just a nearby high window that was cracked slightly.

Someone was dead in that room beyond that window.

He turned and went back to Sharon, taking her hand. They went around to the front of the building, took down the address, then said, "We have a phone call to make."

He could see a pay phone a block away on the outside wall of a closed grocery store, so he started off in that direction.

"I thought we were going dancing?" Sharon asked, scrambling along in her high heels, working to keep up with his fast strides.

"You are going to report a smell to the police?" she asked. "It was bad, but not a criminal offense I'm sure."

"I wouldn't be so sure of that," Jim said, letting go of her hand as they reached the phone and he started digging into his pocket for change.

"What do you mean?" Sharon asked, looking worried. There was one thing he really liked about Sharon. She was smart and knew he was smart, so they trusted each other on a lot of things.

"I've smelled that smell before," he said, as he dropped the coin into the phone and pushed zero for operator."

He glanced back at her puzzled expression.

"Near the body I found up at Lake Mead."

She put her hand over her mouth and even in the strange lights of the street, he could see she had lost most of her tan very suddenly.

The operator answered and he was connected to the police. He gave them his name, his location, and the address of the building.

Then he said clearly, "I want to report a dead body."