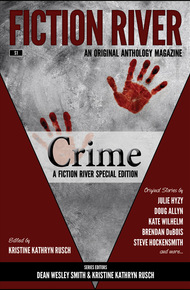 From a twisted tale of greed by masterful writer Kate Wilhelm to a dark tale of murder and betrayal by Shamus-award winner Brendan DuBois, Fiction River Special Edition: Crime covers the entire gamut of the mystery genre—cozy to noir. New York Times bestselling author Julie Hyzy joins Edgar Award-winner Doug Allyn and several others to create one of the strongest (and most diverse) anthologies of the season.

Table of Contents
“Hitler’s Dogs” by Doug Allyn
“Wheel of Fortune” by Steve Hockensmith
“The Good Brother” by Brendan DuBois
“FoL” by Kristine Kathryn Rusch
“These Boots Were Made for Murder” by Julie Hyzy
“Because” by Melissa Yi
“City of Light and Darkness” by Dæmon Crowe
“No Good Deed” by Libby Fischer Hellmann
“Rationing” by Karen Fonville
“Neutrality” by Karen L. Abrahamson
“Plan B” by Kate Wilhelm
“Gas, Tan, Video” by M. Elizabeth Castle
“Jackrabbit DMZ” by Annie Reed
“Eyes on My Cards” by Dean Wesley Smith
“Jokers” by M. Elizabeth Castle
“Photo World” by JC Andrijeski

I'm an award-winning editor—an award-winning science fiction and fantasy editor. When Dean Wesley Smith and I started up a new editing project called Fiction River, the first thing I had to do was expand my editing wings into my favorite genre—mystery. I did what I had done when we started Pulphouse nearly 30 years before. I asked my favorite writers to join us. So, in this volume, you'll find everyone from Kate Wilhelm (one of the masters of the genre) to newcomers like M. Elizabeth Castle. Some of the authors in Crime also have novels in this bundle. So you won't even have to take a trip back to your favorite ebook retailer to find some extra reading… – Kristine Kathryn Rusch

Miss Scarlet in the Library with a Crime Story

Most people who don't read the mystery genre have a skewed perception of what the genre is. They believe that all mysteries are puzzle stories—Miss Scarlet in the Lib'ry with a Wrench. They know about Sherlock Holmes and Miss Marple; they're familiar with Murder She Wrote and Elementary. They believe that every mystery story has a bloodless corpse at its core, and a brilliant amateur detective who can ferret out the killer with a single glance.

Crime fiction encompasses what mystery has become. We can't really say that it's evolved past the body in the lib'ry, because the American father of the mystery is Edgar Allen Poe. He wrote about crime—The Tell-Tale Heart, which is about a guilty murderer, The Cask of Amontillado, a revenge story in which someone gets buried alive, and of course, that "first" detective story, The Murders in the Rue Morgue, which Poe himself called a tale of "ratiocination." (Boy, am I glad that label didn't stick.)

We have both cozies and noir stories in this, our seventh anthology in the Fiction River series. As Dean explained in his foreword, this is our first special edition. I wanted to do an extra push on this edition because, honestly, I adore crime fiction in all its forms.

All of the previous Fiction River anthologies had a crime story or two, but those stories were usually in a different genre: Urban fantasy detectives in Unnatural Worlds, evil mass murderers in How To Save The World, time-hopping criminals in Time Streams, kidnappers in Christmas Ghosts, magical murder in Hex in The City, and dead clones in Moonscapes.

But this volume focuses on the here and now, or in some cases, the then and now. The real world, as the case may be. Crime-ridden and imperfect. Some stories have heroes who come to the rescue. A few have detectives who use their talents to solve crimes. A few stories have no heroes and no happy ending, just the darkness that can be real life.

Each story features a crime, but not all the crimes in this volume are murders. Some crimes are small—traffic stops, cheating at cards—and others are so vast that they envelope an entire culture.

Several stories have twists that you can see coming, and others are so subtle that you'll have to stop and think about what kind of crime actually occurred. The stories surprise in other ways. Just by changing gender, for example, an old tale becomes new again. The stories also jump all over in time—from the Great Depression to the 1960s to the Reagan Era—and back to the present.

I'm particularly proud of the mix of storytellers who've joined us for this volume, from newcomer Karen Fonville to award-winner Kate Wilhelm whose work spans genres and decades.

When I invited the writers into this volume, the only parameter I put on them was that the story needed to be a crime story. I had expectations, though. I invited a mix of cozy writers and noir writers, writers known for dark fiction and writers known for light fiction.

What I got surprised me. Freed from rules, the writers explored new territory. The cozy writers wrote dark tales; the noir writers wrote light tales. It all balanced, even though not in the way that I expected.

This volume has become exactly what I hoped it would be: a snapshot of the modern mystery genre. Or, as the title says, the modern crime genre.

I had a great deal of fun compiling this special edition of Fiction River. I hope you have as much fun reading it.