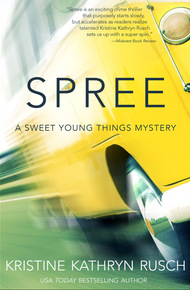 Two days ago, Moira escaped the Midwest with Kasey and her Barbie doll in the back seat of a beat-up van. Now, on sun-drenched Highway 95 in nowheresville Nevada, she wonders if she escaped at all. The residents of Hawthorne, one of the few towns in the desert and her ultimate destination, use bombshells as lawn decorations.

She thinks Hawthorne marks the end of her trip; instead, it marks the beginning of one strange and scary adventure, one she and Kasey need to survive.

I originally wrote Spree as an exercise in noir. Noir fiction usually takes place in darkness—in the dead of night, or at least in rain and gloom. I decided to set Spree in sunny Nevada, with a protagonist who just might surprise you. The book certainly surprised me—it's not the first in a series; that honor belongs to a short story called "Sweet Young Things," but so far, it's the longest piece of the series, with more to come. – Kristine Kathryn Rusch

SUNLIGHT GLINTED OFF the highway, creating snow blindness in the middle of the summer desert. Moira wished she had sunglasses. She wished she had a thousand things, but as her last foster mother used to say, wishing didn't make it so.

Her arms ached from fighting the ancient minivan's steering wheel. A huge wind had been whipping her from Fallon—maybe before—and more than once she thought the entire vehicle would go over sideways.

Part of her cursed Royce Gallagher for tying the mattress onto the roof with only one bungee cord. A trucker had helped her pull another bungee across the top somewhere near Salt Lake when he saw her standing on the van's bumper and shoving.

Hon, you're gonna kill someone with that thing, he'd said as gently as he could. I saw you on 80 and I was thinking the worst thing could happen is that could come loose.

He reeked of cigarettes and diesel. She'd kept an eye on him the entire time, and she hadn't mentioned Kasey, sound asleep in the back seat. When he'd peered in, reaching among the boxes for a rope she swore was there, she'd nearly pushed him away.

But he'd helped and given her the bungee besides, and it had lasted for the next 500 miles, all the way here, Highway 95 in the most godforsaken place on Planet Earth.

Holy Christ on a crutch. How did she get here?

The road wound for the first time in miles. Ahead, that flash of sun on the highway made it almost impossible to see. The signs—Falling Rocks Ahead—registered on her consciousness just after she passed them, her mouth dry, her face so hot it felt like she was going to burst from within.

Her air conditioning had broken in Nebraska. The gas station attendant sent her to a local mechanic who told her it would take two days to order the parts and nearly five hundred in labor.

Plus, he'd said, you'll probably want to replace the belts and all the filters. This thing needs a good tuning, lady, and I can't guarantee we won't find something else. How long has it been since it's been serviced?

She had no idea, so she lied. She said two years, and he about burst a gasket. Two years? Lady, this thing is a death trap.

She knew that. But she didn't have the cash to fix this thing, not that she wanted to. She batted her eyes at him, and he jury-rigged the air conditioning so that it cooled enough to keep them alive, and he replaced the filters. She paid him two hundred dollars out of her stash and he threw in some chocolate for Kasey.

Not that she needed chocolate. She ate too many sweets as it was.

Moira looked over her shoulder. Kasey was awake, strapped into the booster seat, bouncing her battered Barbie along her legs as if the doll had springs on her feet.

The last of the sunscreen went to Kasey. Her skin was even fairer than Moira's. Her white-blond hair made her look like a wisp, something that could vanish in a heartbeat.

"I'm hot," Kasey said. She'd been remarkably good since they'd hit the desert. No radio, no more books on tape, nothing to see except scrub, and sand, and distant mountains, nothing to do except bounce that Barbie for miles and miles and miles.

At least she hoped they were. The little green road signs that had become her salvation—the ones listed how many miles she still had to travel to the end of each long day—told her that she wasn't far from Hawthorne.

But she saw no evidence of it. Except more signs, signs that didn't encourage her, most of them from the Adopt-A-Highway Program. The last section of road had been adopted by a bail-bonds company.

Good God, Gary, she'd thought when she saw it, what the hell have you gotten us into?

Only he hadn't gotten them into anything. He didn't even know they were coming. He would be surprised.