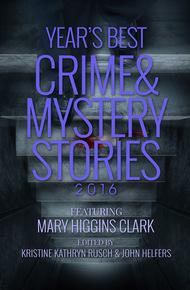 New York Times and USA Today bestselling author Kristine Kathryn Rusch writes in almost every genre. Her novels have made bestseller lists around the world and her short fiction has appeared in more than twenty best of the year collections. She has won more than twenty-five awards for her fiction, including the Hugo, Le Prix Imaginales, the Asimov's Readers Choice award, and the Ellery Queen Mystery Magazine Readers Choice Award. Rusch has also edited Pulphouse, The Magazine of Science Fiction & Fantasy and is the series editor for the Fiction River anthology series along with her husband Dean Wesley Smith.

John Helfers is an author, book packager, and editor currently living in Green Bay, Wisconsin. During his sixteen years working at Tekno Books, he co-edited twenty short story anthologies, and oversaw the production of more than one hundred anthologies in all genres. He has published more than fifty original short stories in anthologies and his fiction has appeared in anthologies, game books, novels, and on websites for the Dragonlance™, Transformers™, Golem Arcana™, BattleTech™, and Shadowrun™ universes. John also operates Stonehenge Editorial, a literary project management company working with such clients as Mercedes Lackey, Esther Friesner, and the Mystery Writers of America, Inc.

The Year's Best Crime & Mystery Stories contains the best crime and mystery stories that were originally published in 2015 in either print or electronic format as selected by editors Kristine Kathryn Rusch and John Helfers.

Reading through thousands of titles and carefully narrowing their favorite reads down to the ultimate list that is presented in this volume, the editors chose their top picks of notable works from hundreds of anthologies, magazines, journals, and websites.

Join Rusch and Helfers as they take you on a representative selection of some of the finest mystery and crime stories of the year, from stories firmly rooted in the classic mystery genres to tales that edge their way over into other genres. Explore human nature in all its variations with writers you may recognize as worldwide bestsellers to amazing voices you might not have experienced before.

Mark Leslie Lefebvre of Kobo Books asked John Helfers and me to edit a year's best mystery volume. I'd been asked repeatedly to edit year's best sf volumes, and I couldn't imagine reading that many sf short stories. But when Mark contacted us, I jumped at the chance to read every mystery story I could get my hands on. John and I ended up with an embarrassment of riches. We had many, many more stories than space.

I love this volume. In it, you'll find familiar names like Mary Higgins Clark and T. Jefferson Parker. You'll also find a few familiar names operating outside their usual genre, like Tananarive Due and Carrie Vaughn. A few first-time writers made the volume, and so did some works in translation. You'll find all kinds of excellent fiction here. Check out the honorable mentions to track down even more. – Kristine Kathryn Rusch

VaMhashu sat in his office, staring blankly at the piles of papers, invoices, letters, contracts, receipts that lay on his desk. In his left hand was a rocker glass with a finger of whiskey, straight. Mavis, his secretary, stood at the door. She'd been there for a minute or two, watching him anxiously, waiting for instructions. VaMhashu looked up and nodded.

"You can tell the superintendent to come in now," he said in a quiet voice.

Mavis turned and gestured with a simple sweep of the hand to allow the man waiting outside to enter. The superintendent walked in. He waited next to the chair across the desk. Mavis closed the door as she left.

"I would stand up, old friend, but I haven't the strength," said VaMhashu, motioning to the empty chair in which Superintendent Chiweshe sat down.

Chiweshe took off his hat, revealing a head speckled with grey hairs. He sat in silence for a while, not even bothering with the lengthy greeting rituals that were expected of him.

"You have found my son?" VaMhashu said. He raised the glass to his lips, but fell short before it reached them and let it drop back to the table again. "Well?"

Chiweshe looked at the hat in his lap.

"We found him at dawn," the policeman said in a grisly voice, "on the shores of Lake Chivero, near a picnic site on the northern bank."

VaMhashu looked up at the ceiling; a film of moisture in his eyes made them shine under the lights. He was a short, robust man, with a bald spot at the back of his head, and wore a moustache. He took several long breaths as he waited for the inevitable blow.

"We've been through war together, my friend, seen men who were like brothers to us die, but I don't know how to break this to you. . . ." Chiweshe's voice trailed a little and he cleared his throat. "Your son, they did things to him. I don't know if it was before or after . . . I am sorry. I am so, so sorry."

VaMhashu gritted his teeth and buried his face in his hands. He trembled like a man on the verge of a fit.

"I am sorry," said Chiweshe.

"I don't want your sorrys. I don't want stories. I want you to find the person who did this!" VaMhashu shouted.

"That's why I came here personally, to give you my word as a man who once served under you that I will not rest until I find the person who did this."

"You are not going to do that sitting in this office, are you?"

The superintendent took this as his cue to leave. He stood up stiffly, straightened his uniform, turned, and marched to the door. Just as he reached it, VaMhashu called to him:

"And when you find him—" VaMhashu reached into his desk and brought out a Mamba pistol from the drawer on his right-hand side, which he pointed at Chiweshe's head as he clicked the safety off.

VaMhashu's home was a large colonial bungalow in Highlands, which stood on a few acres of land, surrounded by tall bougainvillea hedges. It had a sheet-metal roof, box-profile style, which made noise as the rain fell on it.

On the veranda was a group of men drinking Chibuku. VaMhashu and some of the older men sat on old-fashioned wrought-iron chairs, while the younger men sat on the floor. From inside the house, where the women were, a popular funeral dirge poured into the night:

He could hear a voice weeping louder than the rest. It was his ex-wife, Runako, the boy's mother. They didn't have the body yet. It was still with the ZRP. The superintendent would escort it himself, in a sealed casket, when the time came. VaMhashu would rather have had solitude, but when there was news of death, there was no way to prevent relations and friends from swarming in like ants.

The garden boy, stationed near the gate, opened it. A Series IIA Land Rover cast its lights on the garden. Even from that far, the metal grinding of its buggered gearbox reached the veranda, as the driver put it in gear, and it crunched along the pebbled driveway. It parked behind the other cars on the lawn. The driver, a tall silhouette in the night, got out and slowly walked to the veranda, not bothered by the rain.

VaMhashu followed the figure as it drew closer until it reached the light cast from the veranda. It was a woman. A woman taller than any he had seen in his life. She walked with a stoop, as though trying to mask her height. She had short hair, wore a brown suit, a white blouse, and had a small handbag awkwardly drooped near her waist. When she reached the veranda, she stopped, curtsied the old-fashioned way, and clapped her hands, right over left. The men responded by clapping as well.

VaMhashu got up and went to her. He barely reached her chest.

"Nematambudziko," she said to him, as custom dictated.

He didn't recognize her. In the chaos of these things, she could have been a distant relation, or a friend of a friend, or someone just coming along for the free food.

"I know this is not a good time, but can we talk?" she said.

VaMhashu laughed. "I thought he said he was getting me his best man."

"I am she," Detective Munatsi replied in a flat voice, the kind that said she was used to this reaction.

VaMhashu wearily led her into the house, past the praying women, to his study. He sat on his desk and did not offer her a seat. The study had a bookshelf with some old volumes, a world map on one wall, and another wall lined with wooden face masks.

"I need to ask you some questions about the day Tinashe went missing," she said.

"Is this some kind of a joke? I already answered that when I filed the missing-persons report. You should have it in your files!"

"I know this is a difficult time for you, but if you want us to catch this guy, we have to do this now," she said. "Look, I've been pulled off another case just for you." She sighed. "Okay, I want to know what happened on the day Tinashe disappeared."

"It was Saturday, two weeks ago. He goes to play cricket at St. John's, where he's—he was doing his form one. I went to pick him up and he wasn't there."

"What time do you normally pick him up?"

"I don't. The driver usually does that," said VaMhashu. He explained that he had told the driver not to go on that particular day because he wanted to spend time with the boy. Tinashe was having trouble in school since the divorce and he thought it would be a good way to spend time with him.

"When did you get divorced?"

"And you're already remarried."

"That's none of your business."

"I noticed your ring. I'm just thinking the new setup might have disturbed him. Maybe he could have run away and then fallen in with the wrong people. We live in a violent age."

The detective walked over to the wall and inspected one of the masks. It was a light teak piece, an imitation by a local artist of a West African design. She stared into its hollow eyes, the white wall behind.

"After he went missing, did you receive a ransom note?" she asked.

"Nothing of the kind," VaMhashu replied, exasperated.

The detective moved to the side of the desk, took a copy of the day's Herald and tore a neat piece off. She reached into her handbag, brought out a pouch of tobacco, and sprinkled a pinch on the paper. She rolled it and sealed it with a lick. Then she lit up with matches and took a drag.

"You see, that's unusual. Gororos grab a rich kid and don't look to make a quick buck. That doesn't make any sense to me. If it was me, I'd have ransomed him." She blew out a plume of smoke. "Do you have any enemies?"

"Everyone has enemies, Detective," he said.

"Someone you strong-armed in the past, munhu wamakavhara padhiri, a contract gone wrong, someone you cut off in traffic. I want you to write me a list of their names. That will be a good starting point." VaMhashu scribbled some names on a pad. The detective continued, "You were told what they did to him? They took a pound of flesh: his hands, the heart, the gallbladder, his genitals, and the eyes. The eyes are the most important of all."