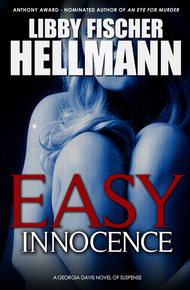 Libby Fischer Hellmann left a career in broadcast news in Washington, DC and moved to Chicago 35 years ago, where she, naturally, began to write gritty crime fiction. Fourteen novels and twenty-five short stories later, she claims they'll take her out of the Windy City feet first. She has been nominated for many awards in the mystery and crime writing community and has even won a few. She has been a finalist twice for the Anthony, three times for Foreword Magazine's Book of the Year, the Agatha, the Shamus, the Daphne, and has won the IPPY and the Readers Choice Award multiple times. She also hosts a monthly radio show called "Second Sunday Crime" on the Authors on the Air internet network. And in 2017, Libby became the host of "SOLVED," a monthly streaming TV interview show produced by Author's Voice. More at http://libbyhellmann.com.

When pretty, smart Sara Long is found bludgeoned to death, it's easy to blame the man with the bat. But Georgia Davis — former cop and newly-minted PI — is hired to look into the incident at the behest of the accused's sister, and what she finds hints at a much different, much darker answer. It seems the privileged, preppy schoolgirls on Chicago's North Shore have learned just how much their innocence is worth to hot-under-the-collar businessmen. But while these girls can pay for Prada pricetags, they don't realize that their new business venture may end up costing them more than they can afford.

Libby loves Chicago as much as I do. We both write series set there. (Mine appear under the name Kris Nelscott.) When she introduced private eye Georgia Davis, also based in Chicago, Libby stuck a toe into a very famous sandbox. Until Georgia Davis came along, Chicago belonged to Sara Paretsky's V.I. Warshawski. Libby (and Georgia) proved that Chicago is more than big enough for another famous female sleuth, one who knows how to handle everything from murder to mean girls. Here's the first book in another series you'll want to read ASAP. – Kristine Kathryn Rusch

LONG AFTER she moved on, she would remember the smells. Her eyes, she kept closed—she'd never been a watcher, and most of the time there wasn't anything worth looking at. But the smells were always there. Sometimes she made a game out of it. She could usually tag them by their aftershave. Brut. Old Spice. The man who reeked of Opium. Those were easy. It was when they didn't bother to clean up, when their greasy hair or body odor or foul breath made her gag, that it got hard. Then she stopped playing the game and took shallow breaths through her mouth.

There was also the dusty smell of the blankets. The starchy scent of the sheets. The faint residue of smoke in the rug and curtains. In nicer hotels, she might catch a lingering trace of disinfectant.

But the smell of sex—that was always the same. It didn't matter whether the man was white or black or Asian. It didn't matter the state of his personal hygiene. Sex gave off that slightly chemical, briny odor. Sometimes yeasty. Sometimes flavored with sweat. It wasn't offensive. Just different.

As she rolled off his body, his aftershave cut through the smell of sex. Spicy but sweet. She didn't recognize it, but she knew it was expensive. She sat up. The room was large and elegantly furnished. Late afternoon sun spilled through wooden window slats. He always brought her to nice hotels. And he paid well. They never haggled.

She grabbed the small towel she'd left at the end of the bed and gently rubbed his cock. He moaned and stretched out his arms. He claimed he liked to clean up right away, but she knew he just wanted some extra attention.

She kept rubbing. "How we doing?"

He kept his eyes shut, but a smile tickled his lips, and he angled his pelvis up toward the towel. "Mmmm."

Men were so predictable. But this was what made it worthwhile. Besides the money. She loved the moment when they reached the edge of passion and couldn't hold on any longer. When they shot into her, relinquishing everything. The feeling of power at that moment was incredible. And addictive.

She massaged him for another minute, then stopped. Always leave them wanting, she'd learned. Sometimes it meant another round. And more money. This time, though, he didn't move. He lay so still she wondered if he had fallen asleep. She hoped not. She had another appointment.

She bunched up the towel and lobbed it across the room. It landed on her black leather mini-skirt. Damn. She'd paid nearly two hundred dollars for it, another two for the jacket. No way she'd let it get ruined by a sex-stained towel. She got out of bed, picked up the clothes and the Coach bag lying nearby. She remembered when she bought the bag. How she handed over the three hundred dollar bills with a blasé expression, trying not to show how proud she was to have that kind of cash. How the sales clerk at Old Orchard Mall squinted, trying to hide her envy. Yes, it was worth it.

She headed into the bathroom, making sure to leave the door open. He liked to watch her get dressed. She tried to remember if he'd always been that way. She thought not. Of course, things were different then. She smiled to herself. If he only knew. She cleaned herself up and put on the skirt, then the filmy see-through blouse. She checked herself out in the mirror, pirouetting left then right. She'd lost a few pounds over the summer, and she liked her new lean look. She'd be shopping for winter clothes soon. That would be fun.

She was reapplying her makeup, thinking about Prada boots and Versace sweaters when his cell chirped. She heard him curse, then fumble around for his jacket. She heard the metallic click as he flipped the phone open.

She studied her hair in the mirror. It had come down, and her blond waves framed her face. But she had another job, so she rolled it back up into a twist. With her hair, her makeup and clothes, no one recognized her. Including "Charlie." She almost giggled. Charlie. What kind of name was that for a john? He should have been more creative. Sometimes she said her name was Stella. The object of desire. Better than that stupid streetcar.

She couldn't hear who he was talking to, but the long exhalation that followed told her he wasn't going to be hanging up.

"That's what we're meeting about." A pause. "The funeral's at Christ Church up here. She refuses to go back to the old neighborhood." Another pause. "Memorial Park."

She stopped fiddling with her hair.

"I told you. I don't want to talk about this. I told you I would handle Fred. But you couldn't wait. Now we're both up shit creek."

Fred? She dropped her arms and slowly turned around. He sat on the edge of the bed, his profile to her. His cell was glued to his ear, and he was trying to pull up his pants with his free hand. She leaned against the bathroom door.

"Of course, she's upset." He snapped the button of his trousers. "He's the only one in the family she talked to. For him to die—alone—in a fire—she's devastated. Everyone is. I told you not to jump the gun. We were practically there."

She bit her lip, trying to piece it together. When she thought she had it, she sucked in a breath.

He twisted around and stared at her. The anger that ran hard across his face disappeared, and his expression grew puzzled. Then his eyes narrowed. "I'll call you back." He released the cell from his ear and snapped it closed.

She looked down. But not fast enough.