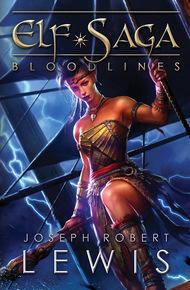 Thirty years ago, an incredible group of elf heroines saved the world from the dragon apocalypse. Now their daughters are on a quest of their own... to save themselves! (Because the world is okay, for the moment.)

Explore an epic fantasy world that's as classic as it is bizarre with GENESEE, a dying artist who desperately wants to get rid of her jaguar powers, RAJANI, a healer with a fabulous flying ship and an entourage of faeries, AMARA, a gunslinging princess with a baby on the way, and NAHINA, an expert sailor trying to save her long-dead family.

Together they must embark on a terrifying voyage to a lost city and journey down into dark, forgotten labyrinths to confront ancient horrors in search of the miracles that can keep them alive. Fortunately, this is an Elf Saga story, so you know they will still find time for humor and romance along the way!

Return to the world of Vaenos, where dragons are weapons of mass destruction, faeries are pests, mermaids are monsters, and everyone has long pointy ears! With elf heroes inspired by historical female warriors, this fun twist on old-school fantasy mashes up classics like Lord of the Rings with the modern style and humor of Supernatural, Buffy, and Hellboy.

I've had the pleasure of knowing Joe Lewis since he submitted a wonderfully written short story for an anthology set in my world of Feyland (said story ended up as the opening tale in the collection). In his Elf Saga books, Joe takes the reader on a series of epic quests with a band of adventurers, in the best of the classic fantasy tradition. – Anthea Sharp

So. Another town, another… whatever this mess is.

I count twenty soldiers, their uniforms shredded, their swords and pistols mangled, their faces bruised and bloody. That's typical. The novel part is that every last one of them is clinging desperately to the branches of a very tall tree high above my head. It's a strange and brutal sight, so it's a pretty safe guess as to who did this.

There are a few local men trying to help the soldiers down out of the tree. It's tricky work, since the tree is fifty feet tall and there aren't any ladders, so they're using ropes, out here at the dusty edge of town. The locals are lightly dressed against the morning heat, loose fringed pants, loose shirts with checkered bead patterns, and a handful of thick copper rings in their very long, very sharp ears.

I nudge my big red pronghorn to saunter closer to the tree and I call out, "Good morning!"

"Does this look like a good morning to you, stranger?" the fellow up in the tree grunts as he lowers his sixth soldier down to the ground.

"Did anyone see what happened?" But I already know what happened. The soldiers are all wearing the green and gold of the Azteran army, and we're deep in the Chirika province of the Union. This is classic Lozen. This is what she loves the most, patrolling the border for excuses to kick some ass.

"I saw it." The man pauses to wipe the sweat from his face before climbing up to the next branch to get the next battered soldier. He shakes his head. "Never seen anything like it before though."

"Yeah, well, I have." I make sure my hat is firmly on my head, shading my features. "It was a woman with jaguar spots on her face, right?"

He squints down at me. "Yeah."

"And she took out all these men by herself. With her bare hands."

"And then she threw them all up in that tree with a flick of her wrist before she rode off into the sunset." I glance west where I can see fresh tracks leading off over the hills.

"Yeah. Well, not the sunset part. The sun was barely up when she rode out." The man tugs the next soldier free and starts tying a rope around the youth's uniformed chest.

"Twenty soldiers with alchemic pistols? Pretty nasty stuff." I nod at the foreigners and the bright green acid oozing out of their crushed guns. "So... I guess it's kind of good that she came along when she did."

"Hardly." The man in the tree frowns at me. "These soldiers came to deliver medical supplies and help build the new windmills." He waves toward the north and I see the half-finished towers of the three mills spread across the plains.

Damn. I guess times change. And that means she's not even fighting the bad guys now, if she even cares about that anymore. What the hell is wrong with her?

"So you know that woman? Who was she?" the man asks.

"Some people call her Lozen." I sigh and nudge my pronghorn to follow the westward trail as I mutter to myself, "But I get to call her Mother."

"What was that?" One of the men on the ground jogs after me. "What did you say?"

Oh shit. I muttered that, I swear!

"Nothing," I say, riding on a bit faster. "I said she's a… bother." Damn it, why don't bother and mother rhyme?

"You said she's your mother!" He grabs my arm and sees the jaguar spots on my hand. "Hey, she's got the same marks. She's like the other one. It's another one!"

"Hey, hands off, jackass, I'm nothing like her!" I jerk my arm free. "I don't go around attacking people. I make canoes, buddy!"

But it's too late. The man jumps back and yanks the knife from his belt. A moment later he has three more sweaty friends with knives beside him, a whole stupid little gang of frightened southern elves who think I'm working with Lozen to ruin their stupid little town.

"Hya!" I try to get the pronghorn running because once I'm gone they have no chance of catching me, but one of the knife-men is too close to the buck's head, and the poor beast jerks back instead of dashing away.

Damn it, Mother. This is all your fault… just like everything else.

I see a flash of light in the corner of my eye, and I snatch the whirling knife out of the air and toss it aside into the dust. Jaguar reflexes to the rescue. "What the hell was that?! It is not nice to throw knives at people. Listen up, you screwheads, I'm not with her! Not even a little bit. I'm out here trying to hunt her down."

"Hunt down your own mother?" The man in front of me shakes his head. "I don't believe a word of that."

I frown. "You don't? Why not? What sort of magical relationship do you have with your mom? You're not still nursing are you? Because that's just gross."

"Why the hell would you want to hunt down your own mother?" he snarls.

"It's personal. Medical. Jaguar lady problems, you understand." I grimace. "I mean, we all have our issues, don't we?"

A second knife comes flying at my shoulder, and I twist sharply to let it fly past me. "Whoa, whoa, whoa! Can we please just talk about this? Seriously, guys, use your words, not your knives."

The man in the tree drops to the ground and picks up a hatchet. Back home that's a tomahawk, but I don't think they use that word here. Not that the name matters, really, when one comes flying at your face. A handful of the Azteran soldiers lying on the ground are watching all this, but none of them are moving a finger to come after me. So that's a bit of good luck. I guess.

"Get her!" The whole gang lunges at me, grabbing my pronghorn's antlers and my saddle and my clothes. I see blades everywhere and… I panic.

I grab the nearest wrist with a knife and I slam the man's fist back into his own face, sending him falling to the ground, stunned and bloody. I kick another in the chest and he flies back on his ass. A back-fist to a skull makes a muffled crack. I slam my palm into a nose, and rip the hatchet from its owner, only to bring the blunt side down on his head a second later.

And then it's over. Five men all covered in blood, half-conscious, sprawled in the dust. I only pause to look at them for a second, just to be sure they're really down, and then I snap the reins and I'm gone, riding hard and fast over the western rise with the bloody hatchet still gripped tight in my sweaty hand.