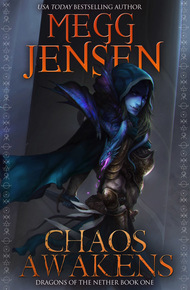 For hundreds of years, the orcs and humans of Doros have shared an uneasy peace. It shatters in an instant with the botched assassination of a human priest in the orc capital. Hell bent on revenge, the humans take up arms as the orc monarchy crumbles from outside interference.

Now Tace, the unlucky assassin, is on the run. It's soon clear, however, that her mistake hasn't only precipitated a war. It's unleashed ancient powers, the stuff of legends and fireside tales—and not the cozy kind.

Tace has always worked solo, but to save Doros, she'll need to assemble the unlikeliest allies. Together, they'll unravel the mysteries of the orcs' cult of death, and in the process, Tace will come to question everything she's ever believed. Only one thing is certain: a great destiny awaits her—if she can live long enough to meet it.

Chaos Awakens is an epic fantasy spanning multiple continents. Orcs, humans, elves, fauns, dwarves, and dragons fight for dominance in a new fantasy world sure to spark the imagination of fans of George R. R. Martin's Song of Fire and Ice series and Robert Jordan's Wheel of Time series. Written by USA Today bestselling author Megg Jensen, Chaos Awakens is the first novel in the new series Dragons of the Nether.

Megg Jensen is best known for her fabulous USA Today bestselling Dragonlands series. With Chaos Awakens, she's branched out into a new fantasy world featuring orcs, elves and humans embarked on an epic adventure, and I'm delighted to include this newest novel of hers in the Epic Elves collection! – Anthea Sharp

Tace held a dagger to the human's throat, the silver tip of the blade glinting in the pale moonlight. "Say your final words, priest."

The old man sat calmly on his stool. Unlike her other victims, his breath held steady, and his eyes remained relaxed. It was unusual, but it wouldn't stop her from completing her task. She had been told to kill him, make it look like a suicide, and she would do it. Every death brought her closer to the salvation she so desperately needed.

"You are a very unusual shade of blue for an orc." The man reached up, resting a wrinkled hand on Tace's cheek, his thumb near the tusk on the right side of her mouth.

She startled, surprised the human spoke the orc language so well. A quick shake of her head and she remembered why she was there. Kill the human priest. The color of her skin was irrelevant. "Sit up. Wrap this around your throat."

The man took the rope from Tace, winding it about his throat. "The continent of Doros is spilt between the orcs to the north and the humans to the south. It should not be so. We must learn to work together."

"Tighter," she whispered in his ear, ignoring his ramblings.

The priest grabbed the ends of the rope, yanking until it was so tight around his neck his nostrils flared.

"I know why you do this." Fear should have laced his words. Instead, curiosity punctuated the guttural orcish words, further muddled by his lack of air and his human tongue.

"Our king has been more than kind to you. He has tried to teach you the truth, that death is our salvation. You have been given every chance to convert. Instead, you continue to preach your lies to orcs in Agitar, upsetting the balance we strive so hard to keep." Tace paused for a moment. "At least that is my assumption. I am told who to kill, not why."

"Did you ever stop to consider King Rafe might be wrong?" The old man stood, his knobby knees steady as he climbed atop the stool.

Tace hadn't had to tell him what to do. He knew what was coming, and he knew better than to fight.

Tace threw back her head, laughter tumbling from between her lips. "It's not I who is in the wrong. Don't tell me seven cities filled with orcs could be wrong, especially not here in the capital." She grabbed the long end of the rope, looping it around the wooden beam, tying it in a secure knot.

She stood back, admiring her handiwork. The knot was tight enough to support the human's body, but sloppy enough to look as if he'd done it himself. Granted, hanging wasn't the neatest way to set up a suicide, but it worked best for the situation. Sometimes poison served her well. Other times, a well-placed dagger to the heart, with the dagger left clutched in the victim's hands. No matter the situation, the outcome would be same. The body would be discovered. The death would be ruled suicide.

Getting the assignment was an honor. Completing it would elevate her within the assassins guild and prove she was as skilled as any other assassin. Though it hadn't been explicitly said, this was her final test, to prove she belonged among the leaders of their guild as much as anyone else.

Now she only needed to execute the man, leaving clues to his apparent suicide.

"Are you prepared to meet Drothu, god of darkness, and atone for your misdeeds?" she asked him, a smile creeping across her face.

This was her favorite part. Sending the priest to her god, where he would face judgment for his cowardly life. He refused to chase after death, so now death would take him.

The old man's eyes rested on Tace's. "I forgive you for what you are about to do. There is something about you." He cocked his head to the side. "I think redemption is in your future, but only if you seek it."

Tace grunted. "I am about to kill you in the name of Drothu, the only true god, the one who asks us to come to him in glory. You will meet him as a coward, and I will be the one to deliver you."

Suddenly, the door across the room was flung open. A human dressed in a yellow cape strode in. "What's happening here?" he asked.

Tace cursed under her breath. She glanced at the door; the lock sat on the table next to it. She'd meant to move quickly after killing the man, locking the door from the inside before she slunk out the window. The apartment had been vacant. How had she missed the sound of someone approaching?

The caped man ran to Tace, grabbing her right arm and twisting it behind her back before she could counter. She struggled against his grip, to no avail. They were evenly matched in size. She was stronger, but he had the advantage of having caught her completely by surprise.

Tace kicked backward, but he deftly blocked her with his thigh. Tace's black hair fell on her face as she bent over, attempting to break his grasp.

Tace could tell his strength was already waning. He was no warrior. Just an acolyte.

"I will meet your god, young assassin, but on my terms. I will tell him you were kind enough to send me, and you will live with the guilt of failing at your task. Maybe then you will seek another way of life." The priest's rheumy eyes settled on the caped man. "And you, Ademar, follow the path I have laid out for you, even if it goes against everything you knew growing up. The two of you must toss aside all you know. The end is coming."

"What?" Tace and Ademar both yelled.

The old man uttered a long string of words in orcish, words Tace couldn't understand, then kicked the stool out from underneath himself. He fell, his neck snapping immediately. Tace had done a good job with the knot. He was dead before Tace could extricate herself from the acolyte.

Ademar ran to the old man's side. He drew a knife from his belt and cut his master's body down from the heights, cradling it in his arms.

Tace bolted out the door before he could stop her.