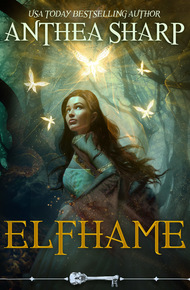 Deep in the Darkwood, a mystic portal awaits...

Mara Geary faces a bleak future in the village of Little Hazel until, on the eve of her seventeenth birthday, strange glowing lights beckon her into the mysterious shadows under the trees. She follows, hoping for adventure. What she finds is her destiny...

Prince of the Hawthorne Court, Brannon Luthinor has spent his life becoming a powerful warrior in order to save his people. Now, on the eve of war, his fate is rapidly approaching.

Brought together by fate, Bran and Mara forge an unlikely alliance. But in the face of evil, will they be able to trust their lives - and their hearts - to one another?

My contribution to this StoryBundle, Elfhame, features a world of fearsome Dark Elves, and the human maiden who opens a doorway to their shadowed land full of magic and prophecy—with a touch of romance and echoes of Beauty and the Beast. This novel was just nominated for the 2017 PRISM Award for Best YA Fantasy! – Anthea Sharp

In the double-mooned realm of Elfhame, the halls of the Hawthorne Court were hushed, the dim corridors even more shadowed than usual. The Hawthorne Prince, Brannon Luthinor, strode in and out of patches of starlight thrown from the high windows onto the flagstones.

Although he was not pleased to be summoned to his father's court, Bran let no hint of his feelings show. For this audience, he had replaited his black hair into formal warrior's braids on either side of his face, and donned a court tunic of indigo silk embroidered with silver.

He'd even washed the mud off his boots. Court opinion was brutal, and though he was protected somewhat by his rank and power, it was always best to give the gossips nothing to fasten upon.

Just outside the ornately patterned silver doors of the throne room, Bran paused. He'd rather face the gyrewolves and twisted spiderkin threatening their border than set foot inside this room filled with courtiers speaking untruths and twisting their actions to suit their ambitions. But the robed servant standing outside the room was watching him expectantly, and there could be no escape.

Settling his jeweled sword more firmly at his hip, Bran took a deep breath, then nodded at the doorman. The servant waved his hand, summoning the small magic that would open the double doors.

The doorman's voice rang out, and Bran stared impassively at the far wall as all eyes turned to him. A few gazes held admiration, others envy, but the worst were the ladies who viewed him as a means to an end, either for themselves or their daughters. That end being the Hawthorne Throne.

Their court was not the most powerful in Elfhame, but it was one of the oldest, and well placed among the seven ruling families.

Luckily, the circumstances of his birth provided an easy answer for why he was not yet married. It did not, however, provide him with a reasonable excuse for not taking mistresses—a fact that many of the women of the court liked to remind him of.

He'd had his share of dalliances, of course, but had no interest in weakening himself or his mission with misplaced attachment. Need for love made one vulnerable. He'd grown up learning that lesson, and had no desire to repeat it.

At the far end of the hall stood a raised dais, and upon it sat the Hawthorne Throne, occupied by Bran's father, Calithilon Luthinor. The years lay lightly on his face, as was the way of their people, but silver threaded his once midnight hair, and his dark eyes held a weary cast.

Beside the ornately carved Hawthorne Throne stood a smaller, less elaborate chair where Bran's mother, Tinnueth, sat. There was no trace of warmth or greeting in her expression, but that was no different from the reception he'd received from her all his life.

According to the gossip, the moment the prophecy had been pronounced over his newborn head, his mother had distanced herself. Although even with his younger sister, Anneth, their mother had never displayed an excess of affection.

"A heart like ice," the nursery servants used to say after Tinnueth paid her obligatory visits to her young offspring.

Bran wasn't supposed to understand, but he did. He'd grown up thinking he was flawed, unworthy of his mother's care, and perhaps it had made him hard, but all good weapons must be made of stern stuff. Without that core of stone, he would not be half the warrior he was.

A warrior who held the fate of Elfhame on his shoulders—and that fate was growing more perilous every day.

From his dais, the Hawthorne Lord lifted his hand in a clear summons, his eyes meeting Bran's. Letting no hint of his reluctance show on his face, Bran made his way toward his parents. He murmured greetings to the courtiers as he slid past them like water. Most let him go with a nod or reply, but his passage was halted when a particularly cloying young woman named Mireleth gripped his sleeve.

"I'm so glad you're back at court, milord," she said, in a low voice that was meant to be seductive.

He nodded and disengaged himself from her hold. Despite their few dalliances, he was not interested in pursuing a connection with the woman. She, however, seemed unable to grasp that fact.

"I'll visit you later," she called as Bran strode away.

He did not respond. Even if he'd fancied Mireleth, the prophecy was very clear concerning his fate. He was destined to marry some ungainly mortal. There was no escaping it, but his life would be a little less miserable if he did not fall in love in the meantime.

Soon enough he reached the dais and dipped into a formal bow before his parents.

"Prince Brannon, you took your time in coming," his father said. "I sent that summons a quarter moon ago."

"Your pardon, my lord." Bran kept his tone level. "I could not leave the front until we'd closed the current breaches and reinforced the barrier."

Even then, it was risky for him to be gone. As one of the leaders, and the strongest magic user among the Dark Elf forces, they couldn't afford for him to be away from the battle for long. But ignoring his father's summons would have been worse.

His mother gave a delicate sniff, conveying her disapproval and disappointment. Bran ignored her.

"Is the fight going well?" his father asked.

It was an outright lie, but Bran would say no more where the sharp ears of the courtiers might hear. Later, in the privacy of his father's chambers, he would confide the desperate position the Dark Elves were in.

And although he'd been dreading the fulfillment of the prophecy his entire life, if it didn't happen soon there would be nothing left to save. The Void creatures infiltrating their world would destroy Elfhame and all its courts. By now, Bran almost welcomed his fate.