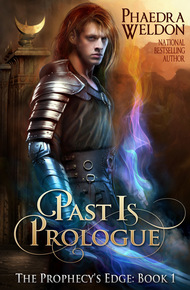 Phaedra's imagination was forged amidst the spectres of the Okefenokee Swamp, the fairy tales of fireflies gathering around fairy cairns for May Day, as well as ghost stories told on the back of pickup trucks in the center of cornfields. She spent her summers devouring books about the unconventional in the conventional world and wrote incessantly in notebooks about elves, witches, vampires and magic. She creatively packaged those stories into several successful and best selling series such at The Zoe Martinique Investigations series, The Eldritch Files and the new Cast In Shadows series (written under the pen name A J Brahms). She has also written for such franchises as Star Trek and Shadowrun. Past Is Prologue: The Prophecy's Edge, Book 1, is the first book in an upcoming duology. This is her first Fantasy.

Past is Prologue by Phaedra Weldon

One hundred years ago a race of warrior Elves, known as the Fata, fought against the world's enemy, the Horde. With a single sword, their King beat the Horde back by turning their twisted magic upon them. In the eyes of the world of Novaria, the Fata were heroes.

But a hundred years past, the Fatan Empire is no more, and her people scattered to the wind. Their lands are now inhabited by the Esteri when they were driven from their land. Of the remaining races, only the Elves of the Wild Wood and the Grimalkin of the West possess knowledge of magic. Portents and signs reveal the Horde is on the move again, having rebuilt their armies stronger than before. But the tales of the Fatan Empire are now buried in the texts set down by the Four Children of the Goddess Vanda. A new hero is foretold, a new wielder of the sword, but unless the old texts can be interpreted within a new prophecy, the Horde will over run the world and darkness will consume the Goddess and her Children.

I first met Phaedra Weldon at a writer's workshop a few years ago, where we talked books, writing craft, and our shared love of epic gaming. Known for her bestselling Eldritch Files series, Phaedra is giving Storybundle readers an EXCLUSIVE first chance to scoop up her newest novel, Past is Prologue, featuring an elf warrior with a heroic destiny. – Anthea Sharp

Thunder rolled over the white, jagged cliffs of Mount Vanda as lightening forked across the darkening sky. The spring water cascading through cracks in the granite, ran red as it fell to the river below. Small, half frozen pellets of rain whipped about the traveling party of ten making their way to the ever burning temple fires of the Goddess Vanda. Swathed in thick leathers and furs of the Esteri people, the Keorenth Empire, they made their way up the frozen stairs to the temple.

King Bennett moved just behind the High Priest, and just ahead of the nursemaid who protected and carried the swaddling infant, the promise of the Esteri's future. The savior. The foretold one. It was a heavy burden for one so small to bare—but King Bennett was prepared to help and teach his son all he needed to know to be a great leader, hero, and King. Even as the cold pressed against him he smiled to himself, setting the frozen pieces of his beard against his cheek.

My son. He will be strong. A fighter. And he will lead the Keorenth Empire, his Esterian people, to power.

When they started their ascent up the mountain, the Priests of Vanda insisted the threatening sky was the anger of the Goddess because King Bennett insisted on purifying his first born. Purifications were not ordered, they were foreseen by the Chosen of Vanda and then requested. But no one had foreseen the Prince's future. The King's brother Marcus, the captain of his guard and his counsel, also mentioned the omission of visions as a reason to wait and see.

But the King ignored them and ordered them up the mountain. Obey, or die. It was the will of the King. Their fear and their apprehension were as thick in the air as the impending storm.

The Temple of Vanda was said to have been carved out of the granite itself. A dome-shaped building with a single entrance facing the Eastern mountains. They filed into that single opening and ascended the ramp that encircled the outer rim of the dome, called the Spiral. It was symbolic of Vanda's ascent into the Heavens.

The Spiral ended at the opening to the inner Temple itself, consisting of four columns to represent Vanda's four children. A domed roof protected the pit in the center below. And in that pit roared the legendary fire of Vanda. Unquenchable. Unstoppable. It was said to be the heart of the Goddess on earth. And to be purified over the flames was to take on a great destiny. To be touched by the Goddess.

As the party moved into the Temple with the Priests, the carved figures between the columns bore witness, representations of the Goddess' daughters and sons. Daughter Eta (Earth), son Foma (Fire), son Aera (Air) and daughter Entique (Water). They moved to the fire to gather warmth. There was just enough room for the Priests to make a small circle around the center flames, and the King and his entourage to remain behind them.

Marcus took up a position opposite his brother in front of the temple's entrance.

Bennett held up his hand and all eyes turned to him. The sounds of the storms outside the dais seemed to lesson, though the wind and the cold remained. He looked around at each of them as his son made a soft cooing noise in his nursemaid's arms beside him. "I thank you all for making this journey to purify the savior of our people. Prince Flynn will wield the old magics and bring us into the age of peace. The Horde is on the move—though their progress towards our borders has been tentative and slow. Our alliance with the Grimalkin is assured, and our hope to form an alliance with the Wild Wood is promising," he glanced down at his son to indicate what he'd already considered. A marriage of his son to their king's daughter. Esteri to Elf. "Today we purify Flynn Cumberland, Prince of the Keorenth Empire. Our future hope and King."

Those not in the Priesthood gave a cheer, but the Priests exchanged less than hopeful looks.

Marcus shifted his stance by the door. He felt the burden of apprehension the most, having been the more sensitive of the siblings of his family. Two brothers, each with opposing views on the world. One wishing to conquer it, the other wanting only to embrace it. First born, he wasn't cut out to be a leader, not because of his differentiating views, but because of the childhood deformity of his left hand. Born with two less fingers and unable to successfully handle a broadsword, Marcus always wore a black glove on that hand, complete with fingers that moved with the glove. He could grip a cup of drink with it, but little else.

Though the climate had changed among his people over his lifetime, there were still those within the old Families of the Esterian people who saw deformity as a punishment of Vanda. Marcus was content in his role as his brother's support. He adored the child born from his brother's wife, Elspeth. Flynn promised to be a sweet boy—he already bore the reddish hair coloring of his mother.

The High Priest nodded to the rest and they dropped their heavy fur lined cloaks in unison, revealing robes of multiple colors to represent the elements. All had shaved their heads save for a long braid from the base of their necks. These braids were brought around over their left shoulders and tied with tiny bells.

The King turned and gestured for his son to be given to him. The nursemaid hesitated briefly before she handed over the fur swaddled babe into the arms of the King. He smiled down at his son, at the reddish fuzz on his head and at the alert look in the babe's eyes as he gazed up at his father.

The Priests began their chanting, a pleasant if not haunting melody, accompanied by the howl of the storm outside. The fire changed color twice, from orange to blue to green.

The fire shifted through the colors of the rainbow—back to blue. The priest turned to the King. "Hand over the child. Vanda has agreed to give the blessing."

Instead of doing what the Priest asked, the King stepped forward. "I will do it."

The Priest's eyes widened. "Please…your highness…one of the Purified priests must pass the child while the flame is blue—"

"Why should I not offer the blessings to my own son?" Bennett thundered at the Priest. Flynn cried out in his father's arms. A small coo and whimper.

"You can't do this—" one of the Priests said. "The flame will not stay blue. While it is blue there is safety—"

"Move away," King Bennett ordered. The Priests stepped back.

Beside the pit was a sloped ramp that allowed closer access to the flame. The King moved to that ramp and descended.

"Stay out of this, Marcus," the King growled. "You will understand when you have a son one day."

Marcus shook his head. "This has nothing to do with—"

The King's right bowed and stepped away.

King Bennett moved into the pit and held his child out before him. "Glorious Vanda—I offer my child for your blessings. He will wield the power of your children, and he will wipe out those who oppose the new Keorenth Empire."

Whether it was the wording, or the intent of them, the flames flickered even higher as the King stepped forward and put his son and his arms into the fire.

Neither of them burned—the fire was for purification. The King would later say it was warm and comforting and he could see his son smiling as little flame-made creatures broke off inside and danced around the child.

And all could have been well…

Bennett wanted to see these creatures himself. He wanted to speak to them. And so he moved even further into the flame. His fur-lined boot struck something solid and he stumbled forward. His son, balanced precariously in his hands, pitched forward.

The flame instantly shifted to orange, then yellow and then red.

Screams echoed within the temple as Marcus acted the quickest and pulled his brother from the fire. The King's gloves were ablaze and he was screaming. One of Marcus' men took up the temple's sacred chalice and threw the water on the King's hands. The furs smoldered as Marcus fought to rip them away. Underneath, the skin was red and scorched, but not too severely. His arms were untouched, though the king's beard was singed to his chin.

Screams and wails, the tinkling of tiny bells, all created a wall around Marcus as he looked into the fire. The Priests were on their knees in prayer, their heads bowed, everyone else cried and tried to see the child.

Marcus could see it—the smoldering skeleton at the base of the flame, surrounded by laughing sparks that danced around the tiny corpse. The Prince was dead. Their savior and their King's only heir—was dead. He looked down at his brother who sat with his arms out, reaching to the flame. His eyes were wide and haunted and his skin was as pale as the snow outside.

The King had killed his heir.