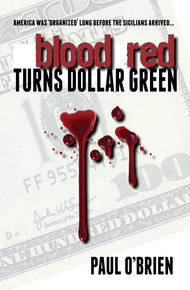 PROCTOR KING nervously watches the show on TV, wondering why his fuck-up of a son does not already have the world heavyweight championship belt in his grasp. Arranging this match has taken PROCTOR four years of pay-offs, double dealing and bone-breaking to arrange, and if all that effort has been wasted then he might just have to take him a business trip to New york.

Lenny Long lay silently and tried to focus on the icebox that was in front of him. Both he and it had just been on the same short journey. His eyes closed and his thoughts emptied from his brain with a satisfying gurgle. Lenny could finally relax; forget about everything. He made it. He proved he could be trusted with the most important job in the whole business. Finally, he could just get some sleep.

Except for one thing.

With a sharp intake of breath, Lenny snapped his eyes open. He struggled to his feet and limped to nowhere in particular along the dark and dirty street in several confused directions. He turned to see his brand new VW Kombi Van overturned and mashed into the grubby iron leg of a railroad bridge halfway down the street.

"What the fuck?" Lenny dragged his leg as he hurried toward the van, but wasn't quite sure what had happened or why.

They can't still be in there.

He tried to move faster but was slowed to a limping gallop by the excruciating pain that was shooting from his leg. He instinctively slid his hand down to where the pain was originating from and could feel a foreign, hard protrusion coming from his hip socket.

Lenny really began to panic as he approached the van. The passenger door was jammed shut and the smashed glass popped under his feet as he slid around to the back window. He gingerly stooped and saw the giant form of Babu unconscious in the back. ”Fuck.”

His other passenger, Gilbert King, was limply sprawled across the ceiling below the passenger seat of the upended van. The radio, like a shocked victim, continued to babble out Ben softly in the background. Lenny could see the windshield smashed through where he and the icebox had both departed from the driver's seat.

More worryingly, there was the faint smell of burning coming from under the steering column where a tiny stream of smoke was piping out.

Painfully but hurriedly, Lenny entered the van and snaked his way up to Babu's massive face. In running the basic math and physics of lifting a seven foot five, four hundred and seventy-two pounder, even a totally disorientated Lenny knew he was going to need some help before that smoke turned to something more dangerous.

Through the side window, just on the other side of the unlit, wet street, he could make out a graffiti-tagged phone booth. Lenny was in the kind of neighborhood where there was just as much chance of him dying over there in the open as there was in a potential explosion if he stayed in the van.

Both the explosion and the phone booth were only possible ways of dying. One thing he was sure would get him killed was to lay there and do nothing, so Lenny positioned himself to administer the kiss of life on the unconscious giant, hoping that maybe they'd both walk away from this alive.

All the pressure of the situation began to beat on him. What happened? How was he going to explain this one to the boss? There was a lot of money riding on these passengers getting to their destination. Enough money to make people do stupid things if it didn't arrive. This was the worst night ever. Of all time.

And then clarity. Sudden and serene. Absolute peace. Lenny knew exactly what to do in this type of situation. His natural survival instincts took the wheel. Like a mother that just knows how to nurse her child; he just knew the perfect technique.

He grabbed a handful of his hair and yanked it downwards, twice.

His panic and the sensation of notfuckingknowingwhattodo quickly returned and peaked with the trickle of smoke that was now accompanied by some angry electrical sparking.

”There must be fucking something...” He wormed back out of the van, and looked around for some inspiration. Anything.

He grabbed the van and attempted to lift. His modest arms tightened and his back strained. He had no chance of lifting a giant but maybe lifting a van with a giant and a grown man in it would be easier.

He exploded with power and roared with endeavor, but only managed to tweak a hammy.

Lenny hit the van with a volley of slaps to punctuate his failure and frustration. The back of his shirt became attracted to him like a shower curtain in a cheap hotel. The back of Lenny's head was busted wide open and the blood was running down his back.

He couldn't wait to get home and show Bree. This is what he'd been doing on the road. Now he could show her the man's work he was forced to deal with. This blood was the exact reason she shouldn't have argued with him in the forecourt in Queens.

”Time for something different,” the smooth voice from the radio said. The wailing guitar of Mott the Hoople kicked in as Lenny scurried to the payphone on the curb.

I have to call the cops.

”Hey?” moaned the voice from the wreckage of the van.

Lenny stopped, not sure if he was hearing things.

Lenny hobbled back to the van and anxiously tried the door again.

”Don't call the cops. You hear me?” demanded Gilbert's weak voice from inside.

Lenny continued to wrestle with the door handle.

”What happened?” Lenny said as he finally managed to open the battered door. He instinctively grabbed Gilbert by the collar, the pain of which immediately emptied Gilbert’s lungs.

”No, no, get me out of here,” Gilbert demanded in a breathless voice.

”No, I mean get me out of here altogether.”

Lenny stopped. He looked around for prying eyes and leaned in to Gilbert's partially missing ear. ”You mean...kill you?”

”No, you fucking fairy. Get me a cab or something. I can't be here with him when there are people around.”

Lenny looked Gilbert up and down. He was no doctor but things didn't look good from where he was. ”I should get an ambulance...”

Gilbert grabbed Lenny by the inseam of his trouser leg, which pinched a little, but Lenny thought it was inappropriate to wince given the circumstances. ”You call anyone and you'll be done. Me and the giant can't be seen together under any circumstances.”

Lenny nodded repeatedly as he again planned his hand placement. Gilbert extended his arms up like a child looking for comfort. ”Drag me. Quickly, you asshole.”

Lenny carefully, but quickly, scooped his hands under Gilbert's armpits and began to drag him from the wreckage.

Gilbert moaned involuntarily as the blood was dripping from his mouth and he was slipping in and out of consciousness. Lenny managed to get his whole body free from the wreckage. He began to slowly drag Gilbert inch by inch to the other side of the road.

”Hurry,” Gilbert said as his eyes rolled in his head.

Lenny grabbed him tighter and began lugging Gilbert across to the curb with less delicate drags.

Lenny gave one last pull to get Gilbert's dead weight body fully on the curb. They fell, exhausted, with Gilbert between Lenny's legs — like two entangled lovers watching the tide come in.

Lenny choked out a laugh of pure relief. No explosion. Gilbert was still alive. The only thing lost was one of Gilbert's boots that must have caught a crack in the street on the journey over.

There was a stirring from the van. Lenny rested Gilbert's head on the ground and began to stand. The humping and the dragging positioned his hip to pop right back into place. The sound was way worse than the pain. Lenny tested, cautiously, a few steps towards the van. His limp was gone, freeing him up to move at a much faster pace.

”Babu?” he said as he approached the van.

The weight of the boot in his hand suddenly caught his attention.

Lenny weighed the boot in his other hand.

He slowly turned and saw that Gilbert's right leg stopped cleanly just at the end of his shinbone.

Lenny instinctively flung the boot over his shoulder. His own knees deserted him and he cracked his head off the ground.

There was no way they were going to make it to the venue on time. One of them mightn't even make it out of there alive.

This was bad. Really fucking bad.