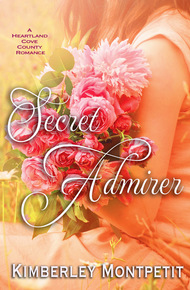 Twenty-five-year-old Anna Hamilton drops out of grad school to come home to Heartland Cove because she's dead broke and her father has received a devastating cancer diagnosis. Working for Captain Newell on his whale tour boat, Jewel of the Ocean, is the perfect job for a girl with a degree in marine biology, but at this rate, she'll never get back to finishing her PhD.

Meanwhile, her best friend from college, socialite Elise Kensington, begs Anna to find her a job where she can hide out incognito. Turns out her fiancé's family is part of the Irish Mafia and Denny O'Rourke wants out of the family "business". He and Elise plan to change their names and elope, before they find themselves the victims of an "accidental" death.

Anna's summer becomes a matter of life or death—and romance—when Heartland Cove is filled with sightings of gorgeous new men in town; Hollywood scouts, strangers with amnesia that wash ashore, and Mafia heirs on the run from killer uncles. Anna unwittingly meets each one and finds herself attracted to them—including the boy she grew up with next door who's suddenly gone from skinny teen to model gorgeous.

Can Anna stay alive long enough to figure out the right man for her, or will she be snuffed out by the mafia, too?

Again, from award-winning author Kimberley Montpetit, we have a contemporary, high-stakes, romance. Anna's relationship with her dad is such a special part of the book. He's a widower and Anna doesn't remember much about her mother after the car accident so it's been the two of them for all these years. I can really relate to raising kids alone! When her dad is diagnosed with cancer Anna gives puts grad school on hold and comes home to Heartland Cove to take care of him, where she winds up taking a summer job as the tour guide on a whale watching boat, Jewel of the Bay. She soon finds herself in love with the charming young, Chad, as well as running from the mob. All is well, until Anna's old college roommate shows up in to Heartland Cove announcing her and her fiancé have decided to elope, but what Anna doesn't know is, they are hiding out from her boyfriend's Irish Mafia family. This is a story about following your dreams, even amidst sacrifice for your family and friends that you love. This is one of the books in the set that brings the big city, to small town Heartland Cove, and the mix is just delightful! – Jacquie Gee

Michael Madden strode down the sidewalk of Main Street, perusing the brief he'd been working on for almost a year, one hand carrying his briefcase, the other holding the manila file folder open to read as he hurried to his rental car, late for his appointment with the attorney.

Hot sunshine poured onto his head, making him wish he was playing volleyball on the beach with a group of voluptuous girls, especially his hot girlfriend.

The faint tang of salty air hovered in the humid afternoon, reminding him of salt water taffy rolled in waxed paper on the boardwalk at Coney Island. His family used to vacation there before they moved to Los Angeles and then back to Connecticut. White paper bags of it, stuffed with hand-pulled taffy in bright colors. He and his brother used to arm wrestle over the very last piece.

Distracted by old memories, the sun blinded him when he ducked under the café awning—and ran smack into a young woman running in the opposite direction down the sidewalk.

Her blond ponytail unexpectedly whipped across his cheek, the smell of apples from her shampoo overwhelming his senses, that Michael didn't have time to shout a warning. He saw the inevitable collision coming as if in slow motion, their shoulders slamming into each other, arms flailing, heads knocking together.

The woman's open water bottle splashed against his suit and his folder spilled across the sidewalk in one big whoosh of scattered sheets picked up by a sudden gusty breeze.

"I'm so sorry," he mumbled, bending down to grab at his papers.

At the same moment, the young woman sank to her knees on the sidewalk, rescuing a handful of the papers and the manila file folder from the puddle of spilled water.

Panic rose up in his throat when they locked eyes. Michael instantly recognized her from the pictures he'd seen. If this girl saw his brief, she'd know that he was on to her. All of his plans—his undercover work—destroyed in a flash of three seconds.

He'd have to leave town and start all over again somewhere else. Being here in Heartland Cove County was the perfect spot for his undercover job. Off the grid, and off the radar. He could disappear and Denny O'Rourke's enemies would never find him.