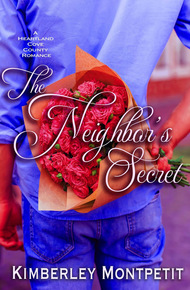 The Neighbor's Secret by Kimberley Montpetit

After being left at the altar on her wedding day, businesswoman Allie Strickland returns to her small quirky hometown of Heartland Cove to heal her broken heart.

Grieving the trauma of her ex-fiancé's betrayal and overwhelmed by her clingy mother, Allie rents the first available house she can find. But on the very first night, Allie's peace is violated by an unexpected intruder who breaks into the house while she's taking a bubble bath. An intruder with an alias and old ties to Heartland Cove.

Forced by unusual circumstances to share the same rental house, Allie's suspicions of the man grow—even as she finds herself attracted to him. But is Ethan Smith merely a freelancer on a magazine assignment—or an undercover spy for the mayor who wants to ruin the charming town by running a new highway through for his own profit?

Is Ethan Smith friend or foe? Enemy or lover?

Allie is about to marry the man of her dreams when Sean leaves her at the altar with the stupidest excuse. He's a high-powered attorney climbing the ladder and when his boss says "Jump", Sean asks "How high?" Which leaves Allie embarrassed and heartbroken.

She returns back home to Heartland Cove, where she rents a place of her own to get out from under her nosy mother, and in the funniest "Meet Cute" ever, a stranger comes barging in on her bubble bath. Allie thinks he's a burglar, but soon realizes that Ethan Smith—who is going under an assumed name—is something else entirely.

Kimberley Montpetit is another award-winning author in our set, who creates gorgeous scenes with beautiful visuals. I loved unraveling Ethan's secret, and reading the beautiful romance that unfolds between he and Allie. Very swoony! This book includes a former home-grown heroine who left for big city life in Toronto, and now has come back. – Jacquie Gee

It was the perfect day for a wedding. After months of trying on wedding gowns, ordering invitations, and searching every bridal boutique in Toronto for the perfect shoes, Allie Strickland was ready to walk—maybe even run—down the aisle of the church and into Sean Carter's waiting arms.

She'd licked stamps to post the more than one hundred announcements until her tongue was dry. She'd suffered through at least that many long-distance phone calls home with her mother back in New Brunswick that sometimes ended in arguments and tears.

If she didn't stop weeping, her mama joked, their tiny town of Heartland Cove was going to flood over. But the calls and planning were over. Allie's wedding day was finally here.

That morning she had taken her big fat red marker and made an X on the calendar.

"Mrs. Sean Carter, here I come," she whispered as she capped the pen and tossed it inside a packing box.

During five years of dating, she and Sean had gone through grad school together, first jobs, saving money, and now Sean was climbing the ladder to become a partner with Learner & Associates Law Firm.

Tonight she'd be with the man of her dreams forever. No more work interruptions. No more hurried lunches—or no lunches. No more agonizingly long street car rides to get to one another's apartments. Lately, they'd just meet somewhere for a late dinner.

Tomorrow, new renters were moving into her apartment on Bloor Street. When she and Sean returned from their honeymoon cruise to the Bahamas, Allie would unpack all the boxes sitting inside Sean's apartment waiting to officially move in.

From inside the hired car, street signs and green lights whizzed past, but with every passing intersection of shops, restaurants, and apartment buildings, Allie's stomach jumped. She checked the time on her phone. The wedding began in ninety minutes and it would take at least half of that just to get through traffic.

She sent a text to Sean and then tried to stare out the window in an effort to settle her nerves. Despite staring blankly at the constant concrete and tightly packed buildings, Roger's Stadium glinted in the lowering afternoon sun.

With her brother Jake at the wheel and the car full of her mother, sister, and best friend Marla on their way to the Episcopal Church, Allie's brain went over her luggage in the trunk, packed for fun, sun, and the beach.

Five pairs of shoes, including a pair of running shoes.

She couldn't wait to get on that plane tomorrow morning and leave work and stress and family behind.