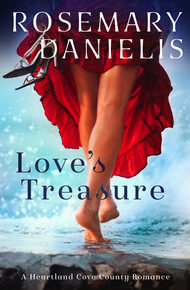 Rosemary Danielis loved to imagine she'd end up in the richly illustrated fairy tales her mother read to her when she was small. Rubbing her hands over the enchanted forests and mythical creatures that lived on the pages, she fell head over heels into the world of books; a love that has stayed with her ever since.

After completing her Bachelor of Arts degree, majoring in Communications, she worked in Public Relations and Computer Training. Many happy, hectic years spent raising her four children, reading them hundreds of wonderful books led her to the realization that she was ready to create stories of her own.

Treasure Mercado couldn't wait to leave Heartland Cove after high-school to escape the relentless teasing she'd endured thanks to her eccentric parents' obsessive treasure hunting along the craggy New Brunswick coastline. And yes, that's where she got the name, Treasure, from…sigh.

She left town with her parents' blessing and as many valuables as she could steal from the mean-mouthed townspeople who'd always treated her like a black sheep from the wrong side of the tracks. Might as well give them something to justify their beliefs.

Her only regret was leaving the one person, aside from her parents, who really did know and believe in her and that was Darcy, her poetry-spouting, sweetheart, who followed her around like a devoted puppy. Treasure knew he could never cut it in the big city where she was headed.

Treasure never had any intentions of returning to Heartland Cove, but that's exactly what she has to do when she has a run in with the wrong kind of people in the wrong part of the city. Not surprisingly she's not welcome back in Heartland Cove either. Hiding out at her parents' oceanside shack, she has to avoid the local police who have a warrant out for her arrest and dodge the heartbroken Darcy whose love has turned into a smoldering hatred. As Treasure stresses out about what to do next she gets a surprise visit from the city creeps who have followed her to her home.

You can't help loving Tee, she's dark and spirited and has the most awesome tattoos, each one represents something she never wants to forget.

Then there's Darcy, a deep, beautiful, tortured poet. Just when Darcy manages to get over Tee breaking his heart, she shows up back in town. It's too small a town to avoid her, but he's going to try. A plan that lasts no time at all. Neither can deny the sparks that fly when they meet again. Proof their connection is far from over.

Tee and Darcy make a great pair of passionate characters in this unique, and tender-hearted 'second-chance at romance' novel premise. It features a fast-paced suspenseful, high-stake, adventure, intertwined with warm and balmy romance, as Tee and Darcy risk their lives on a dangerous mission to uncover a hidden treasure. Rosemary Danielis punctuates the distinct small town feel with a big city threat, and as always, her writing is succinct and resplendent! This book, in the set, features a heroine who's never left Heartland. – Jacquie Gee

I lean my hands on the kitchen counter and stare out the window. A full moon hangs in the pitch-black sky, a supernatural orb, visible just over the tips of the evergreens. Its milky light is intoxicating, an invitation sent out from millions of miles through space to comfort insomniacs and entice lovers.

Once I see it's silvery shimmer I can't look away, as if on some level it begins to possess me. It fills my eyes and makes my heart ache. I remember someone else who couldn't resist a full moon.

But that was a lifetime ago.

I tell myself to go to sleep but the next thing I know I'm slipping out the back door. My feet choose the direction and I've no will to stop them. Back I go through the town walking the streets in the dark, alone, with my hoodie up to mask my identity. It's the way I spent most of my teenage years, except for one other person who kept me company. The one I foolishly think I'll find at the bridge on this full moon night. Our night. No, there's no reason he'll be there, not after what I did to him.

My footsteps slow when I hear the roar of the mighty Saint John River coursing its way under the bridge, on its route alongside our town. The moonlight casts sharp shadows on the long beams of wood that make up the roof of the bridge. One side is lit by its light, while the other, disappears into darkness. Without going any closer, I scan the long expanse, that's open on one side and follow the horizontal bannister. A tall figure stands mid-way along. He leans against one of the beams, head tilted to the moon. His curly mop of hair twists in all directions around his face. Moonlight traces the profile I know by heart, the straight nose, the curve of his lips… I don't know if it's my gasp that turns his head toward me, or if I've willed him to do so. It doesn't matter. I turn and run as fast as I can – away from him.