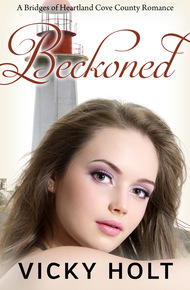 Vicky Holt has been publishing novels for the past several years, and prior to that published short stories in obscure literary magazines you've never heard of. She has six children ranging in age from preschooler to married with a kid of his own. She believes writing is the grandest adventure second only to mothering because it's a way to dabble in all sorts of things. She likes to play in all genres, but there's usually romance involved, because she's in love with her husband of twenty-four years, and that just never gets old.

Sandrine Crossman, former Sergeant First Class in the Canadian Coast Guard, has a couple little problems. The first one is Mayor Jeffries. The villain wants to get Cove Light in his evil clutches so he can turn it into a tourist trap. She won't let him win, come hell or high tide. The lighthouse has been in her family for generations.

The second problem is a lot less straightforward, in a tall, muscular and unforgettable way. Unfortunately, the so-called Charles is, well, forgetful. Once Sandrine rescues him from the storm, she realizes he has amnesia. He doesn't know who he is, where he came from, or where he's going. She'd like to wash her hands of this hunky landlubber, but then again, maybe he could help her out with the mayor. Especially when mysterious vandalism and physical danger turn into real threats.

Sandrine knows how to deal with touchy motors, perilous weather, and even the mayor. But where matters of the heart are concerned, she tends to flounder. In moments of emotional distress, she turns to her pen-pal, Zeb. But he's thousands of miles away, and some problems require a more personal touch. Maybe Charles could help with that too. If only he could remember who he was, and if only Sandrine could forget. Because there's a reason she won't get too close, and the memories threaten to drown her in a sorrow so deep, her only choices are to sink or swim. And right now? She's treading water.

"No man is an island." Well, Sandrine isn't a man, and she isn't on an island. But she would argue that being alone with yoga and her lighthouse was better than any man. She's devoted to her family's legacy, and to forgetting the accident in her past that still causes her anguish. But her lifelong dedication to rescuing the helpless leads her to "Charles". He has washed up on shore and forgotten who he is. She can bandage his head, but can't help him with his memory. She would almost rather trade places. Forget the past and move on. But the ocean that brought him to her has other ideas. As Sandrine helps Charles bring back his memories, it leads to some new ones of their own. Again, by Vicky Holt, this book is utterly sweet. It reads like a touching, classic romance, about love lost and love found, with a very cool lighthouse setting. The Light Between Oceans, by M.L. Stedman comes to mind on this one! This book is another in the set that features a Heartland Cove native. – Jacquie Gee

She didn't want accolades. She just wanted to be left alone, to live here on this beautiful knoll overlooking the water, keep her garden, do yoga, and forget things. Many things. She paused when she reached her rowboat and listened again. Rumbling thunder and pounding waves drowned out any other noise. She shone her flashlight across the water, running it over the waves and crisscrossing its beam over the places where the sharpest rocks jutted out like a leviathan's mouth. There! A man clung to one of the rocks, completely soaked. Her light got his attention, and she saw his mouth open in a shout, though the waves made it difficult to hear. He was lucky she'd heard him earlier. He wouldn't be able to hear her but she yelled anyway. "I'm coming to get you! Hold on!"

Sandrine pulled a life vest out from under the bench and put it on. She quickly unwound the rope of her boat, piled it into the bow and got in, gripping her oars after stowing the flashlight into the gadget she'd rigged to hold it. Heaving the oars, she fought against wind and waves and worked her little dinghy toward the place where the man was marooned. Her own sweat mingled with the lashing rain on her face. Mentally reciting the Coast Guard's mission statement, she directed the prow of the boat toward the man. She knew these rocks like the back of her hand, knew how the waves rolled this way and that, knew just where to lay into the waves and where to let the boat have its head. With powerful strokes, she got her boat to a spot just west of the rocks. With the boat heaving, she dropped anchor and then threw a preserver out to the man. More thunder cracked above them. The man grabbed the preserver and she pulled the rope, all but dragging him toward the rocking boat. With superhuman strength, she gripped him under the shoulders and with his help, got him on board. He heaved, spewing salt water, then coughed and sputtered. He mumbled something. Mindful of the boat's instability, she leaned closer. "What was that?"

His head lolled, but he repeated himself. "You're more beautiful than I imagined."