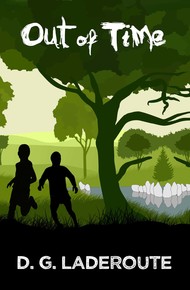 D.G. Laderoute and his wife, Jackie, live in Ontario, Canada. He has been writing off-and-on since 1990, and has had several short stories appear in various publications. Most notably, in 1999, he took second place in an international writing contest sponsored by the Association of Computing Machinery, a consortium of major technology companies.

He has also written extensively for role-playing games, particularly The Legend of the Five Rings product line. His first published novel, a young-adult fantasy, Out of Time, was published by Five Rivers Publishing in 2013. It was short-listed for the Prix Aurora Award—Canada's premier award for speculative fiction writing—for Best Young Adult Speculative Fiction Novel of 2013.

The Great Sky is his second novel, and by no means will be his last.

Out of Time by D.G. Laderoute

For Riley Corbeau, moving to a small town on Superior's north shore was an opportunity for his family to find a new beginning after the death of his mother.

For Gathering Cloud, living on Kitche Gumi's shore now meant it was time seek a vision and become a man. There on a beach of this legendary lake, two boys meet across time and impossibilities, brought together to face an ancient evil from Anishnabe folklore, and in doing so forge a friendship that defies time.

For a bundle that's coming out shortly after Canada's 150th birthday, it seemed appropriate to include a fun YA adventure (to remind us we're still young) in an environment that many associate with Canada (the wilderness, specifically the shores of Kitche Gumi, or Lake Superior). – Douglas Smith

Raven cocked his head, casting a beady eye over a dead thing stewing in the sun.

It might have been a muskrat. It might have been a beaver. Raven didn't care. All that mattered was that it smelled ripe, sweet and ready to eat. But before he could hop down from his perch on a tamarack branch and start feasting, something else snagged his attention.

Whatever it was, it was further up the muddy river that meandered beneath the tamarack's shadow. Raven couldn't see it, but Whiskeyjack, sitting in a birch further upstream, apparently could. She flung herself into the air, flying fast downstream.

Raven swung a hungry eye back to the dead...whatever it was, but whatever was coming down the river was getting closer. Swallow and Starling took wing. Squirrel scampered to the very top of a spindly poplar, decided that wasn't far enough out of the way, so leapt into an adjacent tree and vanished with a flash of bushy tail. Dour Skunk, whose stink could wash away even the delicious aroma of something so tastily dead, stamped his back feet and waddled into the undergrowth. Even Trout shot away with a plunk of water and a silver flash.

Aside from the droning bugs, Raven was alone.

The...muskrat, or maybe beaver...smelled so very sweet, but whatever was coming downstream was almost here, snapping branches and rustling leaves. Raven finally made up his mind, leapt into the air and flapped his wings, lifting himself away from the tamarack and the dead thing beneath it. As he did, he said—

—which was part complaint, part frustration, but mostly warning to any other animals that hadn't yet fled. Though Raven would never admit it, he was more than a little afraid, too.

He landed on a high poplar branch and waited.

Then more snapping and something pushed into view near the riverbank...something with only two legs.

It was a man, layered in grime and insect bites. Blood shone bright red around recent wounds, scabbed and crusted brown around old ones. Aside from a ragged loincloth, he was naked.

Raven cocked a wary eye. He knew men. They were potentially a source of many tasty scraps, like when they gutted Deer or Whitefish after they'd caught and slain them. But men were also dangerous and unpredictable. And this one seemed especially...wrong. He smelled of sickness, infection and long-suffered pain.

And he was grinning.

More than most other creatures, Raven knew something of the faces of men, and this face, like his smell, just wasn't...right. It was fixed, leering, showing teeth all blackened and flecked with what was probably blood. And the leer didn't touch his eyes, which were yellow and flat like dead grass.

Dragonfly, though, was far simpler a creature, unconcerned with the world beyond his limited senses. He'd been flying low along the river, hunting water bugs, but suddenly flitted away from the water and past the man, iridescent wings flashing. Without a break in his jerky stride, the man's hand shot out, a blur snatching Dragonfly out of the air and stuffing him into his grinning mouth. He kept grinning as he chewed, a shimmering wing caught in his teeth.

Raven cocked his head the other way. No, this wasn't right, not at all. He tensed, ready to fly, but paused when the man stopped.

The trees rustled under a sudden breath of wind. The man sniffed the air. Raven could smell it, too. It was the damp smell of big water, cold and fresh; the smell of the great lake far downstream. Raven knew that the muddy river emptied into it, mingling with the waters of a thousand other rivers and streams...a thousand-thousand of them. Raven found dead fish there, sometimes, ripening on its shore. But the rivers brought more than just water to the great lake. They brought animals, birds and fish.

And they brought men. Many of them.

The foul grin went even wider and the man started walking again. Raven watched with satisfaction. Soon, the man would be gone and Raven could drop from the tree, onto the dead thing...

But the man stopped again, once more sniffing the air and turning until he faced the tamarack tree. Raven croaked an aggrieved warning, but the man ignored it, instead shambling to the tamarack and dropping to his knees.

The man looked up at Raven in the poplar and now his grin went impossibly wide, stretching his jaw until it cracked. Dragonfly's glittering wing still fluttered from his teeth. When he spoke, his voice was the rustle of dry leaves.

"So hungry," he said to Raven.

The wrongness in the yellow eyes was too much for Raven. He leapt into the air, beating his wings hard, to fly fast and far away.

Beneath the tamarack, the man lowered his grinning mouth toward the dead thing.