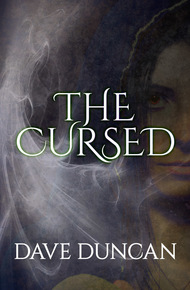 In the fall of 2007, Duncan's 2006 novel, Children of Chaos, published by Tor Books, was nominated for both the Prix Aurora Award and the Endeavour Award. In May 2013, Duncan, a 1989 founding member of SFCanada, was honored by election as a lifetime member by his fellow writers, editors, and academics. His website is www.daveduncan.com.

The Cursed by Dave Duncan

The world was desperate. Since the empire had fallen a hundred years ago, Gwin and her people had nearly given up hope that the Renewer would come. Gwin had lost everything. Her husband was killed in one of the wars. Her children died of Star Sickness. Even her work at the hostel was in jeopardy because the politicians had it out for her. The cursed Gwin, therefore, had nothing to lose. When she took in the girl, a survivor of the Star Sickness, it was a dreadful crime. Gwin was at the end of her rope, and possibly the end of her life if she was found out. But the Sickness had left the girl with certain magic, certain powers, which could prove very useful to them both. Was it possible that this young survivor could save their lives and the empire? Was a new life for Gwin and her world finally at hand?

Shortly after I started writing professionally, I sat on my first panel at a genre convention, an unknown among established pros. One of my fellow panelists was Dave Duncan, and I still remember his gracious welcome to a newbie. Dave is an international best seller and an acknowledged master of epic fantasy and science fiction, with fifty-plus novels and over a dozen series. In 2015, Dave was inducted into the Canadian Science Fiction & Fantasy Association Hall of Fame. The Cursed is often cited by fans as a favorite Duncan title. – Douglas Smith

In the year 1222 by its own reckoning, the city of Qol was sacked by the Zarda. Later historians took that date to mark the fall of the Qolian Empire also. In fact the empire had been failing for at least two centuries, rent by war and pestilence, by economic decline and ever-spreading barbarian incursions.

Even after the capital died in four hard days of fire and slaughter, the great imperial corpse continued to twitch throughout a long and bloody sunset. Warlords chewed chunks out of it to set up independent realms. City fought with city, province with province. Racial quarrels buried for generations arose again. Barbarian hordes settled down to till the soil; starving populations fled their homes to become wandering tribes. A few areas lived on almost undisturbed, happily pretending that nothing had happened.

At first the people prayed for a Renewer who would rebuild the empire and restore the golden age. Their prayers were answered bountifully. Year after year, self-proclaimed emperors rose and fell. None established a realm that could outlive a good pair of boots.

As generations passed, the vision of empire faded. The monolithic Qolian Empire became Kuolia, a continent of squabbling kingdoms.

History posts no milestones, but historians require them, and the sack of Qol in 1222 served as a better landmark than any other. The damage the Zarda had inflicted on the fabric of the city could never be repaired. The Karithian dynasty had ended when Pantholion led his horde up the Sublime Concourse with the head of the boy emperor Iskith on his spear. Flames pouring from the Temple of the Twin God were clear evidence that the world had changed for ever.

Even the imperial calendar itself seemed to die in the slaughter. The old Qolian reckoning by septiles was abandoned in favor of the Zarda system of counting weeks. People began marking time from the fall, dating events from the sack of Qol. It was as if 1223 had never happened and 1222 was the first year of a new age.