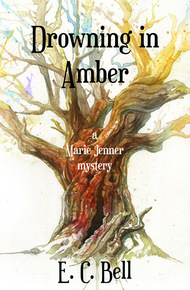 E.C. (Eileen) Bell's debut paranormal mystery, Seeing the Light (2014) won the BPAA award for Best Speculative Fiction Book of the Year, and was shortlisted for the Bony Blythe Award for Light Mystery. The second book in the series, Drowning in Amber, (2015) was nominated for an Aurora Award for best novel. This is the third, and she has plans for more. In her spare time (!) she edits for On Spec, The Canadian Magazine of the Fantastic. When she's not writing or editing, she's living a fine life in her round house with her husband and two dogs. And yes, one of them is a step-on dog.

Drowning in Amber by E.C. Bell

Marie Jenner is at it again!

As she tries—one more time with feeling—to pull her life together, she takes on the case of Honoria Lowe, a woman of interest in Eddie Hansen's gruesome murder by crucifixion.

Since Marie knows where Eddie Hansen died, she figures it will be a slam dunk. All she has to do is ask him who nailed him to the tree, and she'll have one in the win column for her more or less boss, James Lavall.

But James thinks Honoria's either crazy or lying, and doesn't want to take her case. Worse than that, Marie can't find Eddie. He should have been right by the crucifixion tree, but he wasn't. Of course.

There's never a ghost around when you want one.

I've included several books in series in this bundle, most of which are the first title. E. C. Bell's Drowning in Amber is the second book of a trilogy, but it and all the books in the series can be fully enjoyed as a stand-alone work. The first title, Seeing the Light, won the BPAA award for Best Speculative Fiction Book of the Year and was shortlisted for the Bony Blythe Award for Light Mystery. The third book is Stalking the Dead. – Douglas Smith

The Kicking and What Came After

Understand now, I've taken a kicking or two in my life. I have. That's part of living on the streets. But these three guys in Donald Duck masks—which made me half laugh and think, "What the hell?" just before they caught me—put the boots to me good.

I curled into a ball, felt my kidneys turn to mush, and knew I'd be pissing blood for days as I waited for them to stop. Ribs broke—snap snap snap—the pain a distant burr, thank God. They'd caught me just after I'd smoked, and I wasn't feeling much. But I was going to. Like I said, I've taken a kicking or two in my life. I knew what was coming. Another visit to the Royal Alex Emerg.

"Please stop." My voice sounded funny, whiny and high. "Please. I won't do it again."

Had no idea what I'd done, but I was ready to admit to just about anything to get them to stop. Really, just about anything. My pathetic-sounding voice must've touched a chord in one of them, because the boots laid off and the voices started, and so I did what I always do when I get a small break in a beating. I tried to run.

Didn't go so good, I must admit. I crawled about a foot and a half. They grabbed me again, and as they hauled me to my feet, I heard screaming. Took me a second to realize it was me.

Stop the noise. Just stop the noise and maybe they'll leave you alone, I thought. But it didn't stop. Just gouted out of me like it was my lifeblood. Like if I stopped that, I'd stop everything.

Through my high, I started to feel afraid. No. That word's not big enough for what I was starting to feel. Not by a long shot.

They dragged me across the Holy Trinity Church front yard where I'd been sitting, peddling my wares. Scruffy grass, mostly dirt. I watched my feet kick up dust as I tried to run, but the hold on my arms didn't loosen, and then they had me under the only tree left.

They pushed me up against it, face first. The bark bit into my bloody cheek and the screaming went up in pitch. I sounded like a girl—why wasn't anybody helping? There had to be someone around. They flipped me so I was looking out at them. Their masks didn't look so fucking funny anymore, and I tried to stop screaming so I could talk them into letting me go but my voice just wound up and up to soprano registers as they held my arms out, touching the branches of that fucking tree, and I felt the broken bones grinding in one of them. I was broken everywhere.

"Please!" I screeched, blood spewing from my mouth like a fucking fountain, and then even my screams got small and thread, and I couldn't catch my breath.

One of the ducks looked at the leader. "Isn't this enough?" he asked. At least I think it was a he.

"No," the leader said. "We have to make an example of him. These pieces of shit have to understand—"

And then he pulled a hammer out of somewhere, and with it long spikes, and I found the strength to fight against the hands holding me, and almost made it, almost fell out of their grasp, but not quite. Oh god. Not quite.

"We have to make them all understand that nobody can do what this shit bird did and expect to live."

He held one spike to my mostly open left palm and smacked it a good one with the hammer. And again I found my voice.

The last thing I remember seeing, after he nailed me to that fucking tree, was the hammer swinging up in the full moon light. I watched the blood—my blood, my god that was my blood, there was so much of it—arc away, black against the grey of the rest of the world. Then the hammer came down and hit me on the forehead.

My last thought as the world went black was, "I'm in real trouble here."