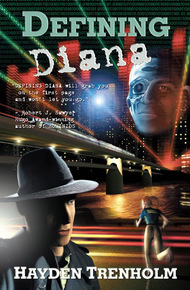 Hayden Trenholm is an award-winning playwright, novelist and short story writer. His short fiction has appeared in many magazines and anthologies and on CBC radio. His first novel, A Circle of Birds, won the 3-Day Novel Writing competition in 1993; it was recently translated and published in French. His trilogy, The Steele Chronicles (Defining Diana, Steel Whispers and Stealing Home), were each nominated for an Aurora Award. Stealing Home, the third book, was a finalist for the Sunburst Award. Hayden has won four Aurora Awards – twice for short fiction and twice for editing anthologies. He purchased Bundoran Press in 2012 and is its managing editor. He lives in Ottawa with his wife and fellow writer, Elizabeth Westbrook-Trenholm.

Found naked and alone in a locked room. The beautiful woman was in perfect health - except she was dead... It's 2043 and much has changed: nuclear war, biotechnology and all-powerful corporations have ruled the world... Now science is taking DNA manipulation to new, unrestricted levels.

Superintendent Frank Steele is an old-fashioned cop. He commands a small, elite police unit that is handed all of the bizarre and baffling cases no one else can solve. He knows the money, the murders, missing persons and gruesome body shops are all connected. He knows it starts with the girl...

I've known Hayden almost since I started writing in the late 90's. He's been an Aurora finalist ever so many times and has won the award four times. He also owns Bundoran Press, so he knows the writing game from all sides: writer, editor, and publisher. Here's your chance to read the first book in The Steele Chronicles, a near-future SF trilogy, each volume of which earned a spot on the Aurora Award ballot. Steel Whispers and Stealing Home complete the trilogy. – Douglas Smith

The woman was lying on her back when her body was found. One arm lay across her small breasts as if in a show of modesty; the other was stretched out pointing to the only piece of furniture in the small apartment, an antique wooden chair. Her hair was short, spiky and that white blonde colour that usually comes from a botched modification. Her skin, too, was the colour of parchment but that was because she'd been dead for twenty-four hours. I knew from bitter experience that when they turned her over her back would be blotched almost black from the settled pools of blood. There were no visible tattoos, body jewelry or external modifications, though the lab might find something once they looked inside her. Looking at her face, I judged her to be about twenty but she could have been five years on either side of that. One eye, blue, was open and staring up to heaven. They used to think, I thought, if the eyes were open, that the last image a person saw before they were killed was recorded on the retina. But that, unfortunately, is just an old detective's tale.

I arrived on the scene just before four in the afternoon, three hours after the initial report was phoned in. I wasn't happy about being late and I sure as hell wasn't about to discuss the reasons why with the officers there. Inspector Willa O'Reilly was standing over the body and checking her watch when I burst through the hole where the apartment door had once been. I joined her and stood staring down at the dead girl.

I shrugged. We're pretty informal at the Special Detection Unit but I didn't really appreciate being scolded by my second in command. If I'd had a good reason I'd probably have said something but I didn't think falling asleep at my desk qualified.

"Willa, Frank. Or Inspector O'Reilly," said Willa. "Only my husband called me Billie."

"Sure," I could feel my face flush. Since returning from stress leave, Willa had been increasingly edgy, but she had never snapped at me in public. I looked over at Detective Buzz Wannamaker, who was lounging against one wall of the room, chatting to a couple of uniforms and occasionally making an entry in his ever-present palmtop. He looked back and arched his eyebrow — the one that hadn't been replaced by strip of jewel-encrusted metal.

"What are you waiting for, Buzz? Get her bagged and down to the morgue. You know Cat likes her meat fresh."

"We were waiting for you, Chief," said Wannamaker. Wannamaker called any one who outranked him 'Chief.' I think it's some form of aboriginal humour.

I grunted my assent and stepped away from the corpse. Wannamaker snapped his computer shut and slipped it into his jacket pocket. He gestured to the uniforms and they came forward with sour expressions and a body bag. Wannamaker filmed them loading the corpse so there could be no later charges that the body had been molested or treated without proper reverence. The last thing the SDU needed was an indecency charge from the self-appointed purveyors of public morality in the New Unity Party.

"So what's so special about this one? Willa?" I asked.

"If you'd read the..." Willa took a glance at my face and shut up. She knew where the line was even if it didn't always stop her from crossing it. She looked down as Wannamaker zipped the bag shut over the still-staring face. "Jane Doe in a locked room. No ID, nothing on the NET, fingerprints, retina, dental, DNA, all negative."

I let the sudden formality pass. Things were tense these days in the Calgary Police Department. I tried not to take offence even when it was offered. "So? Invisible people aren't unknown..."

"Just rare," said Willa, "and most of them aren't white, either."

"Eastern Europe?" I asked. The new Russian Empire still hadn't got around to universal citizen registries. Border security was supposed to keep undocumented refugees out but it was a big border, especially now that so much of the Arctic Ocean was navigable.

Willa shrugged and scrunched up her nose. "Maybe," she said, "but the initial gene scan gives a ninety plus match as Anglo and over seventy as from right around here."

I don't have that much faith in the use of technology when it comes to police work and on other days, I might have said so. Instead I nodded. "I've got a hunch you're right," I said. "This girl looks Albertan. She probably grew up on one of the religious colonies south of Calgary. Home birth, community schooling, no run-ins with the system. That could explain the empty file."

Willa started to object. I held up my hand.

"I don't want to think about the other possibilities. Not yet." Willa suspected every empty file represented a person whose life had been stolen.

For once, she didn't argue.

"Podnarski couldn't say. She took some samples and..."

"Jesus, Frank, we called this in three hours ago. What were you doing? Sleeping?"

Great, I thought, running my hand through my hair. I probably have desk head. The fact I had fallen asleep at my desk didn't make matters better.

"Sorry, Willa. It's this Reid thing... That's why I was late. I was reviewing the file and lost track of time." That didn't sound right, even to me, but Willa decided not to push it.

"The exec who offed his wife and business partner," I said.

"What are we doing with that one? I thought it was over in domestic homicide."

"It was." I gripped my temples between thumb and forefinger and rubbed gently. Napping always gives me a headache. "We had two more last night."

"Last night Randall Kowarski, the CEO at NeWest Oil, pulled the trigger on the Chairman of his Board. And his entire family. An hour later, a banker named Sheila Gant produced an automatic assault rifle at a society do up in Mount Royal. Eight dead and thirty two wounded."

Everybody had their share of troubles in the aftermath of the Asian wars ten years ago but Calgary had gotten through it better than most. Until now. I'd been a cop for thirty-six years and 2043 looked like it was going to be worse than any five of them put together.

"Jesus, if this keeps up they'll have to put the Chamber of Commerce on the endangered species list."