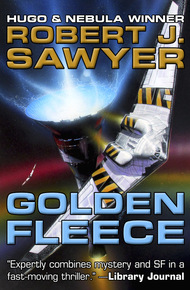 Starcology Argo. A starship on a mission to a distant world. Controlled by a monumental computer named JASON, the Argo proceeds flawlessly…until death strikes its sleek decks with sudden and mysterious precision.

Astrophysicist Diana Chandler is dead of radiation. Her body lies in the Argo's ramfield — where hydrogen ions are funneled into the engines. Chandler's death has been deemed suicide. But her ex-husband, Aaron Rossman, isn't so sure. As he probes further, he becomes certain that Diana's death is a matter of murder — and that the murderer is JASON!

Now Rossman must face the unthinkable: why would an artificial intelligence conceive and execute that most heinous of human crimes? And if so, can a mortal mind take on a cunning computer…and survive?

I couldn't put together an Aurora Award bundle and not include a Robert J. Sawyer title. Rob's won the Aurora fourteen times with another thirty ballot appearances. Rob is one of only eight writers in history — and the only Canadian — to win all three of the world's top Science Fiction awards for best novel of the year: Hugo, Nebula, and John W. Campbell Memorial Award. In 2013, Rob was also inducted into the Canadian Science Fiction and Fantasy Association Hall of Fame. Golden Fleece was Rob's first novel. – Douglas Smith

Humans spend close to a third of their lives asleep. It seems a pity that such time should be wasted. I had tried to make the most of it for Diana Chandler when she first started to get obsessive about what her research seemed to indicate. Initially it had seemed to work — she practically gave up on her calculations at one point, dismissing her findings as insignificant, or attributing them to problems with her equipment. But eventually she came back to them and I was left with no choice.

It seemed again worth trying. I truly did only want to use violence as a last resort, and maybe, just maybe, this would be enough to save the situation. Besides, I wouldn't be attempting to alter Aaron's thoughts. Rather, I'd just be reinforcing what he was already feeling.

Kirsten and Aaron had nodded off within five minutes of each other. The fact that Kirsten was there made the timing more difficult — I had to monitor two EEGs, and work only during the periods in which both were deep in REM sleep. Still, enough opportunities presented themselves during the course of the night. Aaron slept on the right side of the bed, sprawled on his stomach like a lizard lying on a rock. Kirsten, taking what remained of the left side, lay in a semifetal position, her knees tucked toward her chest. At 02:07:33, I began to talk through the headboard speakers, my voice low. Not quite a whisper — I lacked the ability to communicate essentially with breath alone and no vibration of my speaker cords — but in a minimal volume, hardly discernible above the gentle sighing of the air conditioner. I changed my vocal characteristics to resemble Aaron's nasal asperity, and spoke slowly, quietly, right at the threshold of perception: "Diana committed suicide. She took her own life in despair. Di was crushed by the breakup of the marriage. It's your fault — your fault — your fault. Diana committed suicide. She took —" Over and over again, quietly, attenuated, a chant.

Aaron tossed in his sleep as I spoke. Kirsten drew her knees more tightly to her chest. "Diana committed suicide…"

He flailed an arm; her brow beaded with sweat. "Di was crushed by the breakup of the marriage…"

From deep in Aaron's throat, a single syllable, the word "No," dry and raw and faint, broke out from his dream world.

Suddenly Kirsten's EEG did a flip-flop: she was moving out of REM sleep, into a state of only shallow unconsciousness. I stopped speaking at once.

But I would be back.