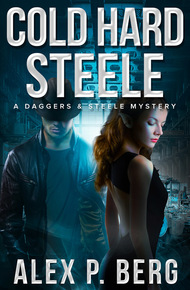 Detective Jake Daggers hates three things—mornings, walking, and naked guys. So when he and his sexy half-elf partner, Shay Steele, get called to a murder scene featuring a bare-bottomed doughy dude with an icy dagger sticking out of his chest, he's not amused.

Even less happy? The Captain, when the lone murder turns into a cold-bladed epidemic. In a case featuring frost mages, enchanted weaponry, and a jaded mystery writer, Daggers and Steele must race against the clock to discover who's delivering deadly doses of COLD HARD STEELE.

Alex P. Berg is one or our very ambitious students at Superstars Writing Seminars. I've watched him build up his fanbase and produce remarkable novels in his "Steele" urban fantasy series. I thought he would be a perfect addition to this bundle. Alex even provided two titles to the bundle, so you can really get a running start. – Kevin J. Anderson

My partner, Detective Shay Steele, sauntered into the room, a playful smile splayed across her thin lips. Her dark chocolate-colored hair hung over her shoulder in a loose, knotted ponytail, and hints of subtle curves peeked out from underneath the bodice of her burgundy pantsuit. Her azure eyes twinkled with a quiet mirth, and her sharp nose was tilted ever so slightly toward the ceiling. I could tell I was in for some sass.

"Let's see, Daggers," said Steele as she walked up. "I know for a fact you only eat kolaches for breakfast, so given that you have them on hand, you must not have eaten your first meal of the day. Given how cranky you become without food, I have to assume you recently woke up. The question is why. Can I assume—"

"I wasn't going to say that," said Shay. "I was going to speculate that perhaps you overslept and didn't have time to grab a bite before you met up with your ex-wife and son."

I nearly bit my tongue in surprise. "That's not far from the truth. But how'd you know what I was up to this morning?"

"Are you sure you're not drunk, Daggers?" asked Quinto. "She can see into the past, remember?"

Steele didn't miss a beat. "Nothing so complex as that, Quinto. He told me."

I eyed her suspiciously.

The fisherman in my brain finally felt a bite. "That's right! I knew I told someone. Captain thought I was crazy."

"You say that in the past tense," said Quinto. "I think the present tense is more appropriate."

"For your information," I said, "I've looked up the definition of crazy in the dictionary, and in my owned esteemed opinion, I don't even come close to qualifying."

"Did you look up the definition of amnesia, as well?" asked Quinto.

"Just for that, I'm rescinding my peace offering," I said. "No kolaches for you."

"Now look at what you've done, Quinto," said Shay. "You've gone and made him moody. You know I have to hang out with him all day, don't you?"

Quinto's shrug implied he didn't, but his crooked smile said he did. I plucked the apricot kolache from the bag and tore a chunk from it with my teeth. I chewed slowly, moaning with delight before sucking my fingers with overexaggerated vigor.

"No hard feelings," I said. "You'll just have to endure the succulent scent of these fried delicacies on an empty stomach, my friend." I held the bag out to Shay. "Want one?"

My partner plucked the honey kolache out of its paper perch with delicate fingers and took a bite. On our first lunch together, she'd ordered a meatless salad of wilted vegetables. I'd feared the worst, but apparently she'd been afraid to make the wrong first impression. Since then, the gal had proven to be a champion eater. Where she put the food, I'm still not sure—maybe elven stomachs work differently than human ones—so I reacted with only mild surprise when she accepted my offering of artery-clogging vittles.

I tucked the white sack back into my coat pocket. "You've been working on your intestinal fortitude, I see."

"What? This?" said Steele around a mouthful of sugary bliss. "It's just a doughnut."

"That's not what I meant. Given all this carnage, the body's got to be a mess, and you're still eating. I'm impressed."

"Actually, about that," said Quinto with a raised finger. "It's not exactly what you'd expect."

I raised an eyebrow.

My partner led our procession over to the bedroom, which held more evidence of the same sorts of carnage that infested the living space. Smashed furniture, a torn sofa chair, scrapes and gouges in the floorboards, and a mattress that looked like it'd been used as the playing surface in an epic game of five finger fillet. Unfortunately for the guy face up on the mattress, it looked like he might've taken part in the game as well.

I almost choked on my kolache. "Argh… It's worse than I thought."

Given the nature of the stiff's apartment, I'd expected a rather horrific body—one covered in cuts, scrapes, and bruises—but the corpse on the mattress was surprisingly clean. His skin was unblemished, without any blood spatters to speak of. His physique was also far less imposing than I'd expected. The destruction throughout the apartment looked to have been caused by a hulking bruiser, but the guy on the bed was several inches shorter than my partner and rather doughy around the midsection.

In the middle of his chest, immediately over his heart on the left side, a thin, ornately-crafted stiletto protruded from his skin. A lone trail of blood snaked down his chest and onto the mattress underneath. It was the only wound I could spot upon first glance, but that didn't prevent there from being one rather horrific aspect of the body.

"So?" said Shay. "If I recall correctly, there was a naked person involved in your last case with Griggs."

"Yes," I said. "But there was a crucial difference between that naked body and this one."

"The nature of the bits between the legs." I waved at the dude's junk. "Nobody wants to see that while they're eating."

"Doesn't bother me any," said Shay as she polished off the last of her honey doughnut and licked her fingers.

"His nakedness isn't even close to the most interesting thing about him," said Quinto as he circled the room. "Tell Daggers what you saw in your vision, Detective Steele."

Whenever Detective Steele arrived at a crime scene, she enacted an elaborate performance in which her eyes glazed over, her hands floated out to her sides, and her fingers tickled the air—the physical ramifications of suffering one of her out-of-body, reputedly psychic episodes. Afterwards, she'd reveal what clues she'd seen etched in the fabric of time.

Shay smiled demurely. "I saw our dearly departed friend over here getting stabbed…"

I stuck out my lips and nodded in mock seriousness. "Really? Wow. We should tell the Captain. You're in line for a raise with that kind of insight."

"…with an icicle," she finished.

I frowned. My partner's visions weren't intended to be strict recreations of the past. Instead, she provided representative images of what might've happened. But in this case, I was having a hard time figuring out what in the world she was getting at.

"The one protruding from the stiff's chest?" I asked.

Quinto nodded. I looked to Steele. She nodded, too.

I felt as if I were taking part in some silly children's game, except there was no chance of getting surreptitiously kissed at the end of it all.

I reached a hand out and pressed my fingers to the exposed portion of the blade.