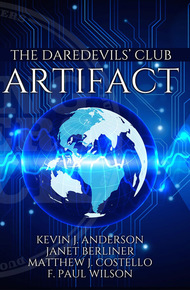 Kevin J. Anderson has written twenty-six national bestsellers and has been nominated for the Nebula Award, the Bram Stoker Award, and the Science Fiction Chronicle Readers' Choice Award. He lives in Monument, Colorado. Janet Berliner, author of many novels, including the Bram Stoker Award-winning Children of the Dusk (with George Guthridge), lived in Las Vegas. She also edited many anthologies, including Peter S. Beagle's Immortal Unicorn. Matthew J. Costello lives north of New York City. He is the author of numerous novels, including Unidentified, a recent Literary Guild Selection, and has teamed up with F. Paul Wilson on two previous novels. F. Paul Wilson has written more than twenty novels, including the bestseller The Keep and the Repairman Jack novels. Twice winner of the Prometheus Award for best libertarian fiction, he lives in Wall, New Jersey.

Six adrenalin junkies who call themselves the Daredevils Club hold the fate of the world in their hands. In an ancient undersea cavern, one of them, oil man Frik Van Alman, discovers a set of stones that are unlike anything else on Earth. Fitted together, the stones form an object that promises limitless free energy for the world.

After a terrified scientist scatters the pieces, the club members race to retrieve them. Each knows that whoever reassembles the unique device will have unlimited power at his or her fingertips. Can anyone be trusted?

In a thrilling adventure that stretches from deep beneath the Caribbean to the penthouses of Las Vegas, friend battles friend for control of the Artifact.

ARTIFACT follows the same lines. Several bestselling authors (F. Paul Wilson, Matthew J. Costello, Janet Berliner, and myself) teamed up to produce a braided novel centered around a powerful alien artifact and a group of daredevils who try to retrieve it. We all brought our A-game to the story and produced something remarkable. – Kevin J. Anderson

After a full day on the platform observing the core samples being raised at the Dragon's Mouth test drill site, what little patience Frikkie Van Alman might have had to begin with had dissipated.

He wouldn't have been there at all, but the crew, skittish to begin with, had been downright nervous since the drill had passed through an undersea cavern. Frik was not renowned for his vast store of patience, but he could not ignore the continuing gloom among his workers. At the other sites there was always music, always someone dancing, someone hiding a joint or a bottle of beer. Here, the only sounds were the wind and the sea, the mechanical whirring of the drill, and the padding footsteps of workers who, morose and silent, moved with the speed of turtles.

"What's eating at them, Blaine? Give me your best guess."

Frik thought of Eduardo Blaine as his wholly-owned subsidiary. The Venezuelan ran the only hotel in San Gabriel and managed the ferries that brought workers out to this site in the Dragon's Mouth, the northern channel into the Gulf of Paria. He was also a pretty fair diver and knew how to fly the helicopter which transported the owner of Oilstar to this jack-up drilling rig.

"They don't care for work in the Dragon's Mouth." Blaine made a weak attempt at a smile. "Tell you the truth, I'm not too crazy for it myself."

Before Frik could say any more, the drill returned to the surface and its load of sludge and rock was tipped onto the platform for examination. He had ordered a core sample of the floor of the cavern, wanting more evidence that there would be oil under it before he went to the trouble—and expense—of having another section of pipe sent down to keep any oil from flowing into this new cavern.

Lying on top of the mud were four irregularly shaped objects such as he had never before laid eyes upon. He had the immediate impression of the turquoise he'd known as a child in South Africa, but these were a bluish-green color that he couldn't quite identify.

He walked over to the silt pile and stretched out to touch them.

Frik looked around to see who had spoken and saw the backs of his workers as they scattered, all except Eduardo.

"He's right, Señor Frik. Better not to touch." In a show of bravado, the Venezuelan moved to Frik's side. "See where they come from first. Make sure they're not Obeah, or the Obeahman might get us."

"Don't tell me they've got you convinced about their kaffir bogeyman." He'd dealt with enough shamanistic beliefs in his boyhood on the veldt that he was unimpressed by the men's fear that the objects might be fetishes. Besides, when he'd first been told of the local superstitions, the anthropologist he'd talked to had said that this particular myth predated the arrival of the Africans and their Obeah worship. It was probably, in fact, as old as the first Arawaks to cross the gulf from Venezuela on their migration northward.

Frik got up abruptly and strode over to the drill assembly. The bit looked like a giant apple corer, almost twenty inches in diameter. Hand on the side of the drill, he glanced through the base of the derrick to the water fifty feet below.

"I'm sending the camera down. I want to see the bottom of the bore hole."

He set up the feedback equipment, attached the underwater video camera to a cable, and lowered the assemblage down the well. As it descended, he focused on the small screen that would show what the camera found. Despite the sophistication of the equipment, the image was grainy and cloudy with silt from the drilling process. It got even worse when, about seventy feet below the sea bed, the camera passed through the hole in the roof of the cavern.

The light from the camera rig vanished into the cavern which was apparently too large for the illumination to reach the walls. A large, indistinct fish swam in front of the lens, and the floating debris drifting away from the drill hole looked as if he had suddenly picked up White Christmas on the monitor.

Frik's frustration mounted. There was little chance on this monitor that he'd be able to distinguish any turquoise-like fragments which might have remained in the undersea cavern. The only way to be sure was for someone to dive down and enter the cave. Fortunately, the presence of the fish assured him that there was an entrance other than the hole his men had drilled.

"I'm not going down there," Blaine said, anticipating what Frik had in mind.

"You'll go where I tell you to go," Frik said, "but you're right. I need you around to fly me off this rig." He yelled out the names of the few workers he knew. "You want to be paid?" he shouted, when no one appeared.

One by one, the men returned. They clustered in small, silent groups, far from the strange objects.

"All right now. Who's going down?"

Nobody moved. "You. Charles." Frik stared into the man's eyes. "You just volunteered. You, too, Abdul. Get your gear. Find the opening to that cavern. If there are any more pieces down there, bring them up. There's a bonus for each one you find."

The men did as they were told. When they had been lowered into the water, Frik said, "The rest of you bastards, no pay today. Tomorrow you work like men or—"

"The hell they don't." Frik took his cell phone out of his pocket and dialed the lab.

"Trujold? Frik. Listen carefully. I want you to get the speedboat and bring your ass over here."

"I'm not going anywhere near your boats," Trujold said. "Your dogs'll eat me alive."

Frik thought for a moment. "All right. I'll send Blaine for you. It'll only take him a few minutes in the chopper, so don't mess around."

"None yet." Frik looked at the indistinct image on the screen. "But I smell one coming on."