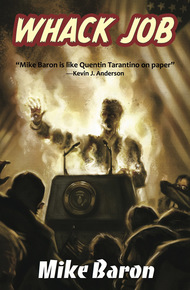 When world leaders burst into flame like a string of firecrackers, the President calls on a renegade former agent with a history of mental problems. Otto "Aardvark" White possesses a unique quality. He's lucky. What Otto discovers in the mountains of Colorado will blow your mind and change the way you look at the world.

Mike Baron is well known in the comics field for his work on Nexus, The Badger, The Punisher, The Flash, Star Wars, Deadman, and other. We both hail from Wisconsin, and we both live in the mountains of Colorado. We bonded over our creative work, of course, but it was really about the microbrew beer. WordFire has published several of his novels. WHACK JOB is a bizarre thriller about alien possession and government conspiracies. – Kevin J. Anderson

The mission was FUBAR from jump street. Two SEALS, two Rangers and three spooks so that Ghaddafi's assassination would reflect well on at least three branches of service. Otto White looked around the cramped interior of the SH 60 Seahawk. It was crammed with men and equipment. Sound and vibration served as a constant reminder that they were carried aloft by a crazy machine that grappled with the laws of physics. The constant vibration felt like a passing freight train.

They'd been working on the intel for months. Ghaddafi was hiding out in one of his sixteen presidential palaces, the one at the Sarir Oasis one hundred miles from the Egyptian border. The seven heavily outfitted men hunkered in the belly of the stealth-equipped chopper, its McDonnell Douglas turbine muffled so that from a hundred meters it sounded no louder than a stiff wind.

Inside the helo was as loud as a boiler factory. There was nothing to see through the heavily tinted windows save the endless Sahara. The pilots saw a vast green ocean with frozen waves through their infrared. They flew beneath an overcast sky into the teeth of a 30 kph wind kicking up sand, the helo bucking and groaning like a ghost of the deep. Ghaddafi's Russian-trained pilots weren't good enough to fly in this weather.

Otto thought he was crazy. Everyone called the Inuit spook Quinn.

The satellite photo showed Ghaddafi's "palace," a concrete monstrosity covering 8,500 square meters; ten-foot walls enclosing what had once been the only available water for fifty klicks. The photo indicated the sad collection of stone and concrete buildings that comprised the village, the makeshift landing strip on which sat an Ilyushin Il-96, a gift from Vladimir Putin.

SEAL Master Sergeant O'Hern bopped Otto on the knee. They were over the drop-off. Otto gave a final screw to each earplug with his index fingers. He touched the crucifix tattoo above his heart and said a silent prayer. Quinn did likewise.

Otto was the bomb guy. It was his job to clear their infiltration by dismantling any booby-traps that lay in their way and use explosives to effect an entry, if necessary. Once inside, Otto would plant the homing device the Navy would use to launch its tomahawk. Master Sergeant O'Hern was the Ranger in charge. The other Ranger was Sgt. Tyrell Hathaway who clenched a Costa Rican cigar in his mouth. The SEALS were Lieutenants Osima and Al Dweeb and the other ops were a young spook named Hornbuckle and chisel-faced spook Ray Benson. Otto had met all six for the first time 48 hours ago. Three white guys, a black guy, an Eskimo, a Japanese-American and an Arab-American. All they needed was a lesbian dwarf.

Hornbuckle was after intel. Benson was a cypher.

At O'Hern's signal, they formed up. Al Dweeb pulled the door open and deployed the ropes. As the helo hovered ten meters above the sand tossing dunes into the air, the seven operators fast roped down to the desert floor. As soon as the last man touched down the helo rose, the co-pilot hauling in the lines. The entire insertion took less than thirty seconds. The sound of the helo disappeared quickly in the blowing wind.

The land was not as flat as it appeared from the air but consisted of a series of gentle undulations stretching into the distance, cutting off the horizon, and providing cover for their infiltration. O'Hern shinnied to the top of a shallow dune and turned on the SOFLAM AN/PEQ 1 laser range-finding device. Putting on goggles to keep the sand out of his eyes, Otto shinnied up next to him. Ghaddafi's palace gleamed dully through the blowing sand three klicks to the southwest.

They could have used a drone but the CIC insisted on eyeball recognition. No more aspirin factories. Hornbuckle was after intel. The men followed O'Hern in silence over the dune and up the next. It was 0330 Zulu time. The shallow dunes stopped a half klick from the palace. They would have to cross that space with no ground cover save a handful of malnourished fig trees. The wind picked up, whipping pinpricks into every square centimeter of exposed flesh. Only Otto's chin remained uncovered.

They grouped along the last sand ridge, each man deploying his night vision scope. Ghaddafi's so-called palace looked like a concrete warehouse from the outside. The walls canted in toward the top at a ten-degree angle. The only concession to architecture was a lone minaret poking up from inside the near wall. A massive double steel door, closed, offered the only break in the featureless slab. Along the top Otto picked out one sentry hunkered down against the wind trying to light a cigarette in his cupped hands. After a few failures, he disappeared below the rim seeking a pocket of still air.

O'Hern signaled and they broke into two groups, O'Hern, Hathaway, Osima and Benson, and Al Dweeb, Hornbuckle and Otto. Otto's group circled the palace counter-clockwise, bringing them through a series of ruins, mostly abandoned cinder block shops and homes but also the remains of a Coptic Church. Those who chose to remain in the forlorn village had been forced to relocate 500 meters from the palace. Ghaddafi had had a single water outlet installed in the village center connected by pipe to the palace. He could turn it off at any time.

Otto took point fifty meters from the nearest ruin, his camo causing him to blend in. A minute glow lit the ruler-straight eastern horizon, but was cut short by the low-hanging blanket of sand. He crawled on his belly, cradling his carbine in his elbows. The nearest ruin was a gutted shell with scorch marks. It could have been ten years old or two hundred. Peering through a gap in the wall with his night vision Otto saw shifting green sands.

He made a circular motion and within seconds Al Dweeb and Hornbuckle had joined him. Spread out, they circled the palace, climbing over blasted sills or shifting rubble, the wind a constant presence whipping up little sand devils in the corners and peppering the skin.

The sentry on the south wall was more diligent, but he didn't look down. Otto, Al Dweeb and Hornbuckle converged at the south gate. While Hornbuckle and Al Dweeb hugged the wall, Otto got down on his knees and inspected the steel door, slightly inset due to the sloping walls. He pulled out a tiny battery-powered sniffer and waved it around the rim. He used a pen light to examine the gap between the door and the frame.

Satisfied, Otto removed a can of WD-40 from his pack and squirted the door's hinges. With a gloved hand, he pushed it open. It was unlocked, as their mole had promised. There was a minute squeak instantly lost in the wind. They slunk inside. Otto closed the door. Tinny Egyptian pop played from a tabletop radio next to a soldier in military drabs dozing in a tilt-back chair, feet up on a gunmetal desk.

The three ops entered a large dim cavern, the motor pool. The Agency had paid a million dollars for the intel and the open door. No one knew who the mole was. The room smelled of petrol, cleaning solvents and some exotic spice. Save for the dozing soldier, they had the room to themselves. The room contained a Mercedes limousine, an ancient Cherokee, a Russian Tiger with a roof-mounted .50, and an old olive drab bus. Intel estimated two dozen soldiers in the palace, plus Ghaddafi, plus "wife," and maybe one of his sons, all of whom the ops had learned to identify on sight.

Hornbuckle signaled them to cross the floor and form up by the door leading into the interior. As Al Dweeb was halfway across the floor, a dull thump resounded causing the earth to shift and dust to rain down.

A Team had detonated their distraction.

With a shout, the sleeping soldier came awake, slammed his feet to the ground and ratcheted his AK-47.