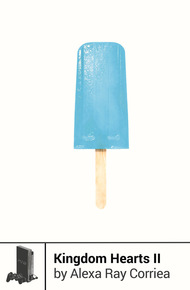 Alexa Ray Corriea has been writing about games professionally since 2011. Over the years her work has been seen on G4, Polygon, and GameSpot. She is also a host and co-founder of the video podcast series What's Good Games.

Light and darkness. Heroes and villains. Final Fantasy epics and... Donald Duck? The Kingdom Hearts series has always walked a fine line between masterfully executed crossover and nonsensical fan mashup, but Square Enix and Disney's intercompany franchise remains beloved throughout numerous sequels, prequels, and remixes. Despite the outlandish premise and convoluted lore, what lies at the heart of Kingdom Hearts is more than familiar to fans of Final Fantasy and Disney alike: friendship.

For games critic and JRPG superfan Alexa Ray Corriea, no game in the series better exemplifies friendship than Kingdom Hearts II. Corriea's close reading of protagonist Sora's struggles and triumphs, his friendship with rival Riku, and his dark journey into oblivion illuminates how the unlikely universe of Kingdom Hearts authentically portrays human relationships better than any solo Final Fantasy or Disney game ever could. Just as Kingdom Hearts II is greater than the sum of its parts, Corriea's exploration of the game's themes and emotional depths reveals how each of us is stronger for the people who surround us.

"The blend of personal story & game history often inherent in the Boss Fight Books series clicks again with this book, which actually manages to make the famously complex lore of Kingdom Hearts (somewhat!) understandable, while also talking about what the series meant to Alexa while growing up." – Simon Carless

When I played Kingdom Hearts II for the first time, one moment stuck with me above all else.

Before the final string of boss battles, after reuniting with Kairi—a brief hug and the murmured words "this is real"—Sora prepares to continue his trek through The World That Never Was to find Xemnas. Ansem, tall and ominous in his black coat, watches this exchange from a dozen feet away. Silently, he turns and begins to walk away, only for Kairi to run after him and demand, "Riku, don't go."

At this point in the game, the player knows that Riku has taken on the visual appearance of Ansem, the main antagonist of the first Kingdom Hearts. After being possessed by Ansem, Riku retained part of his darkness, and leading up to this moment has been learning how to harness that power without becoming evil. Sora spends every free moment he has in Kingdom Hearts II looking for Riku, inquiring with everyone he meets about his whereabouts and lamenting his absence. Riku, meanwhile, has been dodging Sora, afraid to appear before him wearing Ansem's face.

But the moment Kairi speaks Riku's name, Sora's face twists, displaying a confusion and pain we haven't seen before. Kairi beckons Sora forward and takes his hand, placing it on Riku-Ansem's.

A slow, almost mournful song plays in the background as Sora closes his eyes, and looks past Ansem's guise to Riku, the friend he has so desperately searching for. Taking Riku's hand in both of his, Sora falls to his knees.

"It's Riku. Riku's here!" he cries, weeping and visibly shaking. "I looked for you! I looked everywhere for you!"

The scene reminds me of a moment earlier in Kingdom Hearts II, where Saix kidnaps Kairi. Saix calls Kairi "the fire that feeds Sora's anger," assuming that harming the girl will rankle Sora, leaving him emotionally vulnerable. This statement is wildly incorrect: Sora's fervor for Riku far outweighs his fervor for Kairi—or for anyone else in the game. Riku is Sora's fire.

Sora and Riku's reunion is the big emotional payoff of Kingdom Hearts II, while meeting up with Kairi doesn't even get a fraction of this attention. That's because there is no traditional romance in Kingdom Hearts. Rather, we get a picture of intimacy between two young men, two best friends. It's exceedingly rare that any kind of media portrays non-romantic love between two boys so deeply—too often this kind of bond is dismissed as sexual or nothing at all—but Kingdom Hearts excels at painting that picture.

As Kingdom Hearts's main storywriter, Tetsuya Nomura seems keen on positive portrayals of male intimacy. He worked on the main premise of Final Fantasy VII, which featured a handful of close and complicated relationships between male characters. Cloud's relationships with Zack and Sephiroth—two former brothers in arms—color our experience in his shoes. In Final Fantasy VIII, the rivalry between Seifer and Squall is borderline flirtatious, with Seifer's antagonism towards Squall nearing obsessive. These male relationships would continue to play a role in future Final Fantasy games even without Nomura's involvement—the camaraderie between Braska, Auron, and Jecht in Final Fantasy X, for instance, or the budding mutual reliance and respect between Snow and Hope in Final Fantasy XIII.

But in Kingdom Hearts II we see this love in its purest form, as we watch Sora break down in relief and joy over Riku's return.

The relationship between Sora and Riku is not the only intimate male friendship featured prominently in Kingdom Hearts II. There is also the bond between Axel and Roxas.

When Kingdom Hearts II begins, Roxas has already left Organization XIII and is trapped in DiZ's Twilight Town simulation with no memory of his status as a Nobody. Through flashbacks, we learn that Roxas had grown unhappy during his time with Organization XIII, and upon learning about his connection to Sora, decided to search for and meet him. Axel is aware of Roxas's plans to leave and does not alert the Organization to Roxas's departure—the others view his leaving as a betrayal.

Throughout Kingdom Hearts II, we see the same flashback a handful of times: Roxas walking away from Axel and saying, "No one would miss me."

"That's not true!" Axel shouts behind him, then drops his voice and murmurs, "I would."

After encountering a brainwashed Roxas in Twilight Town, he is saddened to hear that his friend does not remember him. He becomes increasingly upset when Roxas continues not to cooperate with him, and in Roxas's second fight with him it feels as though his anger is turned more on himself than on his former comrade. When we watch Roxas's flashbacks of Axel pleading with him not to leave the Organization, we hear the sorrow in the latter's voice as he says he'll miss Roxas. Counter to everything the Organization has been led to believe, Roxas inspires true emotion in Axel: friendship, sorrow, understanding, compassion, love.

If Nobodies can regrow their hearts, what emotion more powerful than love can jumpstart their reconstruction? Roxas is the driving force behind Axel and influences his every decision, even when Roxas no longer exists as a separate, complete human being.

When Roxas is reabsorbed by Sora, this does not deter Axel from trying to see him again. Spurred by the desire to see his friend once more, Axel attempts to kidnap Kairi and use her to lure Sora to him. Then, so he says, he will separate Sora into a Heartless and Nobody once more, thus reincarnating Roxas and allowing him to again be his own free being. This plan goes awry, however, and Axel eventually gives up his plans to harm Sora.

Instead, Axel moves from attacking Sora to protecting him. If he can't bring Roxas back, he settles for the closest thing: standing by the human Roxas is a part of. Axel takes up this duty with a fierceness not present in the rest of his actions. While he calmly accepts responsibility for Naminé from DiZ and goes about his kidnapping business, he approaches the task of protecting Sora with fervor. He wouldn't have done this if Roxas were not in the picture—Axel makes it clear he's not into Sora's plans or his duty to stop Xemnas from summoning Kingdom Hearts. Axel's behavior shows that he sees his self-worth only within the context of his friendship with Roxas. Without Roxas, Axel does not value himself or his own existence, as evidenced by his readiness to sacrifice himself to save Sora.