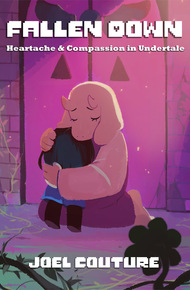 Fallen Down - Heartache & Compassion in Undertale by Joel Couture

In September of 2015, Undertale came out and swept players up in its celebration of compassion, friendship, and spaghetti-making skeletons. Eschewing violence, "The RPG game where you don't have to destroy anyone." lets players befriend killer robots, fishy knights, and warrior dogs through careful conversation in combat.

Fallen Down: Heartache & Compassion in Undertale, an unofficial look at Undertale, explores why we want to make friends with the cast of monsters that would normally get in the way of any other RPG hero. It looks at the ways the game gives monsters personalities and feelings, how it teaches the player to feel for their foes, and what that connection means should the player choose violence in their explorations of the Underground.

Featuring tens of words from developer Toby Fox, Fallen Down is a celebration of the positivity and creativity their work has created in the world, as well as a personal look into our behaviors in digital worlds and the cruelty that stems from playing in them without consequences.

"EXCLUSIVE: For being such a smash hit, there's been relatively little writing about Undertale, and Joel's intelligent made-for-StoryBundle analysis of Undertale's soft underbelly comes with a cover from longtime Undertale contributor Temmie Chang & even a very brief clarifying quote or two from Toby Fox himself." – Simon Carless

"I'm not ready for you to leave. I'm not ready to say goodbye to someone like you again. I just want you to remember me like this. Someone that was your friend for a little while."

Undertale, "the RPG game where you don't have to destroy anyone," came out on September 15, 2015, bringing with it a relentless optimism, a ridiculous sense of humor, and a cast of characters that would go on to create homes in the minds and imaginations of its players.

A single human has fallen into the Underworld, the place where monsters have been sealed away. There, they'll make their way across the underground confines of this world, meeting all of the creatures and beasts that call this place home, as they try to find a way back to the human world.

Being trapped in a land filled with monsters could be the start to just about any RPG or video game. It's the loose premise for so many games, and largely a look at what many players willingly do to themselves when they boot up their console or PC. We look to throw ourselves, willingly, into these worlds of monsters and creatures, hoping to enjoy adventure, battle, and friendship as we work our way from one side of the game to another.

But players who were already readying their combat abilities needed to pause with Undertale. Rather than give players endless hordes of random battles against goblins, slimes, and irritable horses (Garland has nothing on a pair of enraged horses), they were instead given an opportunity to strike up a conversation with the creatures they came across. Yes, they could stab them with the game's timing-based combat system, but talking to the monsters would allow players to end a fight peacefully.

"I always liked talking to monsters in Shin Megami Tensei. So I started programming a battle system where you could talk to foes and convince them not to fight. When I started making the game the idea that you could beat it without killing anyone just... evolved naturally," said Toby Fox, developer of Undertale, in an interview I did with him back when the game came out.

Players didn't have to kill every monster they came across as they played through Undertale. Instead, players could take a variety of actions, from choosing not to pick on someone, laughing at their jokes, offering to pat them, joining them in song, or doing any number of things that wouldn't involve stabbing or clobbering anyone.

In taking these actions with the monsters, the player could get to know them. Find out what they liked or didn't like. Learn a little bit about the creatures that had stepped in their path, and maybe walk away from a random battle with something other than GOLD and EXP: friendship.

This system of actions paired well with the game's heartwarming, ridiculous cast. Motherly, goat-like creature Toriel, who takes the player in when they're in danger; the joking Sans, a skeleton in a blue hoodie who can't help but tease the player in a friendly way; Papyrus, the ceaselessly positive skeletal hero who provides even more humor when paired with his brother Sans; Flowey, a living flower that is a sinister (yet pitiable) foil for the player; and many, many more charming characters awaiting the player, each one with their own opportunity to talk, bond, or fight.

Undertale's funny, cheerful cast of monsters were the type of characters players would want to know more of. Even if it was just to hear more silly things from these characters, players wanted to keep seeing them, and being able to talk to them or have fun with them in combat, rather than just fight them as standard video game bosses, helped encourage players to give peace a chance.

And who could really feel good about themselves in killing Toriel after she took you in? In striking Papyrus when he's been so kindhearted in his feeble attempts to capture you?

The great characters and the ability to end things peacefully with them form a powerful concoction, one that made players want to do better and be better.

Or maybe it didn't. Undertale also lets players lash out at the monster world like any other RPG, killing everyone in their path if they're not impressed at the depths of friendships available for their character. If they tried to do that, though, a whole new story, along with an unsettling world and different looks at all the characters many would come to love, awaited them. The world shifted with the player's intent, adding the draw of being able to leave your mark on the narrative.

And if you screwed up in some way while you did so, the game still changed. If you slipped up and hurt someone, characters in the game would make reference to it, even if you restarted your game or didn't save. Running contrary to every rule most players know of games, certain behaviors were permanent, even if you wanted to erase them. Some, frighteningly, would never, ever go away.

Undertale offered what appeared to be simplistic characters, but there was so much to learn about these characters by talking to them or behaving a certain way in a fight, or even just by watching their behavior in combat. They could learn even more about these silly beings by playing the game in different ways, eventually reaching a point where they would learn their darkest secrets in ways that broke free of the game world itself.

When Undertale arrived, it floored players with its simple, yet deep, charms. With its loveable cast of characters with intelligent stories. With the simple fun of an absurd situation and conversation. With character designs that could kickstart the imagination, or bring out a laugh on a difficult day. With its depths of expression on the nature of games and how we play them. It was a celebration of positivity – a reflection on the power of compassion.

But it also skulks in the darkness. It looks deep into the nature of the player in a world where consequences don't matter, or can be erased. It looks into how we behave when we have a world at our disposal and no reason to behave ourselves within it. How we act when we come back to worlds we've already saved, playing through those old games again. It asks questions on our morality in digital world.

"Don't you get it? This is all just a GAME. If you leave the underground satisfied, you'll 'win' the game. If you 'win', you won't want to 'play' with me any more. And what would I do then? But this game between us will NEVER end," says Flowey, our flower antagonist. Or just another victim of a power that will drain much of the joy out of this cheerful experience.

Undertale has inspired artwork, music, animation, cosplay, toys, and all manner of things across all different ages. Children and adults have fallen in love with this world that Fox has created for a variety of reasons, all of them charmed by that cast and the depths of the stories contained within. It's a beautiful, wondrous world to take some time in, and within that place, there is much that will inspire thought and contemplation.

And introspection, for good or ill. Because now, in writing this book, I know that Flowey was right about me.

And I will never, ever, come back to Undertale again.