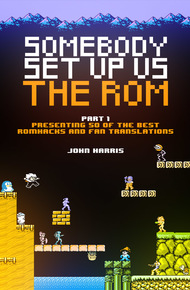 John Harris wrote @Play for GameSetWatch, the book Exploring Roguelike Games for CRC Press, and a variety of other items, some of which can be found at rodneylives.itch.io. He's also a member of Metafilter, and maintains the blog Set Side B, at setsideb.com.

Somebody Set Us Up the ROM, Part One by John Harris

Some people think, with some justification, that romhacks are mostly about seeing how many dongs someone can fit into a single game. But the best ones are far from that. Sometimes they add major features to beloved games to make them playable for a new generation. Sometimes they greatly improve game graphics, or present new worlds to explore. Sometimes they correct terrible design decisions. And sometimes they translate game into other languages, allowing them to be read and appreciated by new audiences.

This book is a collection of good romhacks, small and large, simple and incredible. And without a single dong to be found.

"EXCLUSIVE: There sure are a lot of ROM hacks - changing levels, characters, and entire game modes - out there on the Internet, & John Harris has done a great job of trawling through them & finding some spectacular highlights in this made-for-StoryBundle tome." – Simon Carless

Where do Romhacks Come From?

The great majority of romhacks are made by hobbyists. To produce them, one or more people work to change the bytecode and data in the rom files in such a way that the changed game works in an emulator, or sometimes actual hardware when played on a flash cart. Sometimes they laboriously change the rom's data a byte at a time using a hex editor. Sometimes they use editor programs to change the data more easily. For some games (especially Sonic the Hedgehog and its sequels) they actually have source code available that can be compiled to recreate the object code of the original game, then make their modifications by changing that. This process of creating this source code is called disassembling the program, and the produced code is a disassembly. This is the most flexible method of hack creation, and resembles to a degree the process the developers used to make the original game. But the reconstructed source code is much harder to understand than the original source code would be because the decompiler that produces it cannot reconstruct the labels and comments present in the original source. Without that explanatory data, hacking a ROM's disassembly is not much easier than just hacking its bytes directly with a hex editor. Fan-commented disassemblies of games do exist; most of the Mega Drive/Genesis games in the Sonic the Hedgehog series have commented disassemblies, which is a major reason those games have so many high-quality (and just plain out weird) hacks.

No one pays hobbyists to construct romhacks. If they did, they would likely run afoul of the law to a greater extent than they already do. Most do it out of sheer love for the game and the desire to contribute to it. Some romhackers graduate from making hacks into commercial software development. Hacking game engines on a bytecode level is difficult, but with strong effort it can be a good way to learn, on a nuts-and-bolts level, how high-quality game engines are constructed. Christian Whitehead, aka The Taxman, is a noted figure in the Sonic the Hedgehog hacking community, and contributed on Sonic Megamix. He was hired by Sega themselves to produce for them the Sonic game Sonic Mania, which as of this writing is hotly anticipated, and promises to be the best official Sonic game in over twenty years. That said, the attitude of companies towards learning a prospective hire has romhacking in his background varies greatly: it can be an excellent way to demonstrate one's skills, but some companies look askance at anything that even remotely resembles hacking. In this way, console companies lag behind the attitudes toward game modding exhibited by PC game companies, many of which have come not only to accept and embrace the mod community, but, recognizing both the increased sales and the positive publicity having popular mods can bring, even provide hooks and tools to assist users in modding their software.

There also what are known as bootleg carts. These are cartridges produced for sale by others than the legal publisher of the game. In China and Russia, official versions of games were in short supply, not available or were too expensive, so some people dumped the games, burned the code on other ROM chips (sometimes with minor changes in order to escape casual inspection). Some bundled many of these games into "multicarts" like these owned by YouTuber Pat the NES Punk. These were arguably the first romhacks, although the results were usually pretty silly.

There are a handful of "official" romhacks, modifications made by the original publishers and made public through a rerelease. These are generally not covered here, but a few deserve special mention. Most of Nintendo's Virtual Console rereleases of their games have been modified to remove sharply strobing full-screen effects so as to be gentler for players suffering from epileptic seizures. The word is that these effects are toned down as a function of the VC emulator that presents the game, but the result is similar. Many releases, both from Nintendo and other companies, take the opportunity to polish a translation or fix typos. The Legend of Zelda is a game that's been iteratively fixed in this way several times; Tomato covers some of these changes in his Legends of Localization series.

One particularly interesting hack Nintendo made to one of their games was to release a Virtual Console version of NES Donkey Kong with the Conveyor Belts (AKA Pie Factory) level of the arcade restored to the game. This version was distributed pre-installed on special Wii consoles sold in Europe, and is now also available on Virtual Console for the 3DS. This is the only official, non-arcade version of the game developed by Nintendo to feature this level.