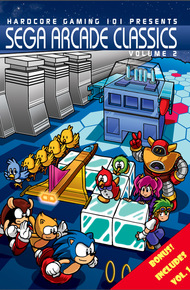 Get ready to re-enter the world of Sega! The long-awaited Sega Arcade Classics Vol. 2 delves deep into the vaults of Sega's most obscure titles, running from the late 70s and their discrete logic boards, though the games released on the 2D powerhouse System 32 arcade board. Covered games include golden era arcade classics like Pengo, Zaxxon, Congo Bongo, and Flicky; their racing titles, ranging from their classics like Monaco GP and Turbo, up through Hang-On and Rad Mobile; beat-em-ups like My Hero and Arabian Fight; the origins of Sega's super scaler line with Subroc 3-D and Buck Rogers and the Planet of Zoom; overlooked classics like Spatter, Ninja Princess, Bonanza Bros., and Aurail; and the long forgotten Sonic the Hedgehog arcade game!

Also includes the third edition of Sega Arcade Classics Vol. 1, revised for 2017, as a bonus!

"A wonderful continuation of the arcade history of one of the greatest video game creators of all time, from obvious classics like Choplifter & Zaxxon to obscure gems like Dark Edge & Super Locomotive. BONUS: you'll also get Sega Arcade Classics Vol.1 bundled in for free!" – Simon Carless

The topic of this book...includes a number of early Sega arcade games, starting from 1979 with Monaco GP, and going all the way up to the games published on the System 32 board. After this, Sega switched to the Model 1 and ST-V boards, which focused on 3D, which I felt was a good stopping point. Most of Sega's more popular properties were already featured in Vol. 1, so Vol. 2 is more like "obscure Sega". Granted, some of these games were once very popular ? Zaxxon and its isometric perspective was hugely influential for many years, both SubRoc-3D and Buck Rogers and the Planet of Zoom are fantastic technical showpieces (and predecessors to games like Space Harrier), and Pengo was cloned to hell and back, spawning a whole subgenre. There are a lot of games featured here that might not be considered "classics", but are still well worth checking out for retro game fans, like Sega's progressive Sega Ninja and Westone's mecha run-and-gun Aurail. There are many experimental games, like the competitive quasi-FPS Last Survivor, or the dizzying 2D/3D fighter Dark Edge. Further, there are still lesser known Sega greats like Bonanza Bros., Hang-On, Flicky, and the lone Sonic the Hedgehog arcade game. In other words, Sega's history goes far deeper than most sources typically cover, and has a library filled with fascinating and weird titles, one well worth exploring.