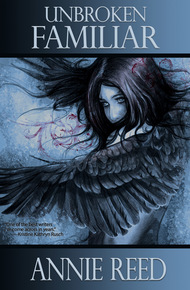 Nothing can break the bond between a familiar and a wizard.

Nothing can break the spirit of a bonded familiar.

Except the murder of her wizard.

Someone—or some thing—murdered an elderly wizard who practiced black-market magic, leaving a young familiar caught between her human and animal forms. Twig, a street-wise elf, becomes embroiled in an elaborate game of murder and revenge when she joins forces with the familiar to track down the wizard's killer.

Award-winning author Annie Reed has not only had her science fiction and fantasy stories honored by fellowships, but one of her mysteries was selected for The Best Crime and Mystery Stories of 2016. As I was putting this bundle together, I really wanted her in it. And thankfully she had available Unbroken Familiar, a wonderful fantasy tale about the bond between a familiar and a wizard. I love this story and I have a hunch you will as well. You can find links to more of Annie's wonderful books and stories at annie-reed.com – Dean Wesley Smith

A cold rain plastered Twig's hair to her scalp and the back of her neck, dripped in large drops from the long, delicate points of her ears, and raised goosebumps on her skin.

Rain was nothing new in Moretown Bay. The Pacific Northwest city that hugged the bay of the same name saw more rain than sun, and more cold days year round than warm ones. The cold didn't usually bother Twig, but tonight was different.

She leaned against the wet brick wall outside the strip club her friend Jocko owned. He'd named the place Snow's Palace, a dig at some movie Twig had never seen. Apparently Jocko, the tallest dwarf Twig had ever known, had a serious dislike of the way dwarves had been depicted in the film.

Jocko's twisted sense of humor had been the first thing (other than his sheer size; Jocko stood well over six feet tall) that Twig had noticed about the big, hairy guy when they'd met years ago. Her own twisted sense of humor, as well as her diminutive size, had caught his attention, and they'd been friends—after a fashion—ever since.

She wrapped her bare arms around herself, trying not to shiver. Heat and cold, sunshine and rain, all the permutations of the elements weren't supposed to affect elves, but tonight Twig didn't feel much like an elf at all.

Her family had disowned her.

She'd torn up the parchment a coal black crow had delivered less than an hour ago. It didn't matter. She couldn't get the formal, stilted language of the proclamation out of her brain.

And her most damning sin:

You have associated with a dwarf who has himself dishonored his own kin.

Twig supposed she should have known this was coming.

In the Shadows, the locals' name for the hard-luck neighborhood down by the commercial piers in Moretown Bay, sin was a way of life. Jocko's strip club wouldn't even be classified as "sin light" by the Shadows' standards.

Drug deals, kidnapping, murder. It all happened after dark in the Shadows. Even the cops didn't patrol the area all that much. Back when Jocko had worked vice, he'd been one of the cops who did venture past the boundaries between the places most law-abiding citizens called home and the places where crime didn't bother to hide its face.

To the elves of Marlette Island, and especially the elves, like her family, who had royal blood flowing in their veins, merely associating with sinners was sufficient reason for banishment.

The garish neon sign advertising Snow's Palace reflected off the slick pavement of the street outside the club. Loud surfer music—the only kind of music Jocko allowed in his club—blasted into the night air as the door opened and a group of drunken humans poured themselves into a taxi waiting at the curb.

The club's bouncer watched the men get into the taxi and then turned toward where Twig stood in the rain beyond the awning that covered the club's entrance.

"Don't you have enough sense to come in out of the rain?" he asked.

He was a muscle-bound weight lifter hired to intimidate anyone who wanted to get fresh with the dancers. Twig had grabbed him by the nuts and squeezed—hard—when he'd tried to intimidate her back when they'd first met six months ago.

The bouncer hadn't been around back when Twig first went to work for Jocko. She'd been gone from Moretown Bay and Jocko's life for nearly a decade helping a friend, but circumstances had brought her back to the Shadows. She'd tried to get inside the club to see Jocko, and she hadn't had any time to spare. That's what happened when someone was out to kill you.

The bouncer had thought she was a kid, and he'd tried to stop her from going inside the club. The Marlette elves, especially those with royal blood like Twig, looked perpetually young. Other than her long, delicately pointed ears, her youthful appearance was the only thing that gave away her heritage.

The bouncer hadn't taken her seriously when she'd told him she was probably old enough to be his mother, so she'd taught him looks were unreliable when it came to elves.

Consequently, the bouncer didn't like her, and she didn't like him. But at least he'd contented himself to only jab at her with words.

She certainly wasn't about to explain to him why she'd come outside in the rain.

She didn't want to be surrounded by her adopted family—Jocko and the changeling dancers and her fellow bartenders—when her own kin had disowned her. It all hurt too much.

If she was the type who drowned her sorrows in alcohol, she'd be inside drinking away a week's worth of wages, but that had never been her style. She was brash and bold—ten years spent with a motorcycle gang while she was trying to help her friend tended to do that to a person—and she never, ever let anyone see her hurting.

"Nutty elf," he muttered under his breath before he went back to his post just inside the door.

Stupid man. He could have whispered, and she still would have heard him over the music.

Twig heard more things than humans could ever imagine with her long, delicately pointed ears. More than music and speech and the whisper of a breeze rustling the garbage in an alleyway at noon.

She ignored most of it, the way she imagined humans ignored the sound of their beating hearts. They only paid attention when something went wrong.

Twig ignored the everyday sounds of magic in the city. She'd learned to tune them out early, or they would have been like thousands of discordant notes playing simultaneously in her head. She only heard the unusual. The strained. The injured or captive.

Like when she'd heard the imprisoned magic of the spirit that had been trapped inside her motorcycle.

The motorcycle was just a motorcycle now. She'd parked it in the alleyway next to the club, but that motorcycle—and the spirit that the motorcycle gang had been trapped inside it—was the reason she'd left Moretown Bay and Jocko's friendship behind all those years ago.

That was probably another reason her kin had disowned her. Elves of her station didn't join motorcycle gangs. It Just Wasn't Done.

She'd first heard the injured magic of the gentle water spirit trapped inside the chrome and steel of the motorcycle not long after Jocko had opened his strip club. When she'd been young, back when she'd still lived on Marlette Island with her kin, she'd heard the unfettered songs of magic sung by the water spirits who lived in the bay. The mournful tones of this gentle spirit's magic hurt her heart.

Twig had made it her business to free the spirit, even if it meant she had to leave her friends behind.

Jocko had taken it personally.

Apparently so had her kin.

Freeing the spirit had taken ten years of her life and taken her far from Moretown Bay and farther still from Marlette Island. But years to an elf were not as dear to her as they would be to humans, or even to dwarves, and Twig had considered it a small cost.

The fact that she'd returned to Jocko for help in defeating the demon who'd been using the water spirit's magic to augment its own had gone a long way toward repairing their friendship.

A friendship that had now cost Twig her family.

It didn't matter. She'd get over it. Most of the women—human and otherwise—who worked in the club had been disowned by their kin in one way or another. Jocko had a soft spot for women who needed help, and he never said no to any woman who asked for it.

Not that she needed his help now. She didn't need anyone's help. She certainly didn't need her—

The sound of magic in distress interrupted her thoughts.

Twig stood up straight and cocked her head to one side.

The sound was deep purple and ancient, and it resonated at a level that was almost beyond Twig's ability to hear. It came to her on a whisper of blue-black wings and sorrow.

The rain pelted down harder, as if the Shadows itself was weeping.

Twig swiped at her ears with an angry hand, trying to dry them. Something about this magic sounded familiar, but the sound was so faint, the memory wouldn't come.

Words did. Very faint on the air and garbled.

The words came with a vision—an old woman floating on the dark water of the bay. Perched on her chest: a dark bird one instant, an ancient girl-child the next.

She was the Merlin Twig had hired to set the water spirit free.

The Merlin who'd set something else free that night as well—a beast whose master Twig had killed.

A beast who'd been banished by the Merlin.

It looked like the beast had returned to even the score.