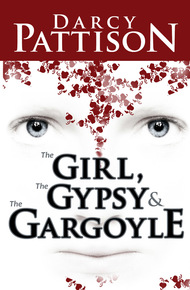 The Girl, The Gypsy & The Gargoyle by Darcy Pattison

MIRACLES COME AT A HIGH PRICE

"Every block of stone has a statue inside it and it is the task of the sculptor to discover it." –Michelangelo

But what if an unscrupulous sculptor could trap someone inside a block of stone, just so he could carve them? And can miracles come from tragedy?

Threatened with the loss of the only home she's known, Laurel listens to a proposal from Master Gimpel, a deformed stone carver. He intrigues Laurel when he offers a path to untold riches. Master Gimpel explains that his Troll's Eye, a red jewel, is a doorway into the stone world where a treasure cave awaits. From the moment Laurel looks through the Troll's Eye, she and her gypsy companion enter a dangerous race for their lives.

This is a rich, surprising, and sometimes disturbing tale of gargoyles, and those who carve the creatures from solid stone. There's darkness in this cautionary tale, that nevertheless pulls off not one, but two miracles, and brings Laurel home to stay. Follow Laurel's harrowing journey toward miracles.

Darcy is the only one in this bundle with a short story also in Fiction River: Universe Between. So you get to read two of her stories and trust me, you won't be disappointed. As an acclaimed fantasy writer, she had published novels from a bunch of the major New York publishers including Harcourt, Penguin, Harpercollins, and others. For this bundle, she gave us the wonderful novel The Girl, the Gypsy, and the Gargoyle. Now if that title doesn't make you want to read the book, I don't know what will. For more information about Darcy and her amazing career, go to darcypattison.com – Dean Wesley Smith

WHEREIN THE GIRL, THE GYPSY AND A GARGOYLE RUN INTO EACH OTHER

When Laurel disappeared, her father and the villagers and the priests of the Cathedral of St. Stephens searched and lit candles in prayer and pleaded with the heavens for news of her, but they never thought to look up.

It began on a brisk spring morning. Laurel groped for Sloth's cold cheek and caressed the polished stone. From her perch atop a twenty-foot ladder, Laurel looked across the rooftops of the Cathedral at the graceful lines and the gargoyles that capped many gutters. Behind the gargoyles, where the sun couldn't reach, there were still patches of icy snow.

Sloth, named for one of the seven deadly sins, sat in a niche above the main entrance.

Below, Father steadied the ladder and fussed, "How's it look?"

Laurel had scampered up the ladder to check the gargoyle, despite the fact that her father usually insisted that she should stay off ladders with her skirt. "It's not safe," he said. "You'll get tangled up."

But she had helped him carry the ladder and then before he could start up, she grasped the rungs and started climbing. He had sighed, but said nothing.

"He is too indulgent," Dame Frances, her old nurse, had always said.

And when Laurel asked what that meant, Dame Frances sniffed and said, "He lets you do whatever you want. And that's not any way to raise a proper lady."

Laurel liked the word, indulgent. She liked what it meant.

Beside her, Sloth grimaced in sleep and she mimicked his contorted face. She had always liked this gargoyle, with its grotesque expression. Maybe she liked him because he was wrapped around the smaller gargoyle and it seemed to her that their sleep was peaceful, even tender, the older protecting the younger.

Her hand went to the large gargoyle's broken wing. The wind grew fiercer, picking up bits of old leaves and blowing them around her face, trying to loosen her hair from her hood.

She called to her father, "You're right. It's badly broken."

Master Raymond, the architect of the cathedral and her father, cursed softly. He hated spending construction money on repairs, and there could be a lot of repairs after the severe winter.

"Come down," he ordered.

But she didn't want to go down just yet; she was enjoying the view. Below her, the city of Montague lay quiet, sheltered by the cathedral's shadows like chicks protected by a mother hen. A ten-foot wall surrounded the city and inside, stone houses with thatched roofs crammed together in a jumble of streets.

With a sigh, she balanced by holding onto the gargoyle's leg with one hand and the ladder with the other. She stepped down to the next rung. But the rung gave way with a crack and she flailed, almost falling. Her weight, though, pulled the gargoyle forward and it tumbled, scraping out of its niche and plummeting toward her father. Laurel swayed and screamed and somehow her foot found the next rung, and both hands found the ladder.

Stone crashed onto the cobblestones below.

Twisting around, she saw a splotch of red spread across the ground, surrounded by broken chunks of stone. "Father!"

Laurel scrambled down the ladder, her breath catching a couple times at how shaky it was without Father holding it. At the bottom, she spun around and—

"Ooomph!" Something smacked into Laurel.

Hands grabbed at her, kept her from falling. A voice yelled, "Hey! Watch out!"

She blinked uncertainly at a scrawny boy, a Gypsy from the look of his tall boots and that wide leather belt.

Abruptly, the boy turned her loose and held up his hands in a gesture of apology.

Laurel looked around wildly. Where was Father?

"I'm here, Laurel. This boy pushed me aside just in time."

She wanted to run to her father, to embrace him, to make sure he was all right. But she controlled her panic and merely nodded at him.

Still flustered, she turned her attention to the boy. It was his red cape she had seen spread out on the ground.

Now, the boy's feet were widely planted, braced against the wind, which had grown even fiercer. He wore a wool-knit cap, but curly dark locks escaped and whipped about.

It wasn't an uncommon sight; traveling entertainers often stopped in the town of Montague. The Cathedral of St. Stephen drew many pilgrims and the pilgrims drew those who made money from the pious. But this was the first Gypsy of the spring.

Laurel swayed in the wind and the boy clutched her cloak again to steady her. "Hey! Don't blow away."

"Turn me loose." Her voice was tight.

He dropped his hands and stepped away, but then stopped to tip his head back and back, staring straight up, perhaps all the way to the top of the cathedral's spires. Because of the cathedral, devotion to the church was common here in Montague. But this was different. Emotions swept across the boy's face: wonder, a straining to see better. Then a peace smoothed his features.

Laurel tilted her head and studied the boy. Her father's face went through a similar change every morning. Father loved his cathedral and not just because he was the architect. He loved it for its beauty, for its soaring towers that pointed toward "our gracious Lord who sits enthroned in the heavens." A Gypsy boy interested in a cathedral, though, was as out of place as a saint in a rowdy tavern.

On the other side of the town square, someone yelled, "Jassy!"

The boy startled. "Oh, I forgot! Antonio! He needs—" And without finishing, he loped away.

Curious now, Laurel stared at the brightly painted Gypsy wagon that sat under a bare-limbed linden tree, a gaudy splash of color in the dreary landscape. Two other people—Gypsies, she supposed from their bright capes—stood near the wagon, perhaps an older man and a girl.

Laurel sighed. They would do some sort of show later, probably during lunch when the square and market were the busiest. She'd hear all about it later at the tavern.

Turning back to her father, Laurel said, "I'll put up the ladder and clean up this stone."

He held a chunk of the broken statue, a nose. Sighing deeply, he tossed it aside and pulled her into a hug. "Are you hurt?"

"I just climbed down the ladder. You dodged Sloth. Are you hurt?"

"I'm fine. That's just another statue we have to replace," he said. "But right now—" He stopped to cover his mouth and cough, then continued, "—we have an appointment to talk with Father Goossens in an hour. I'll go back to the tavern and pick up what I need and meet you at the Father's chamber."

Laurel nodded. She usually attended all the meetings with the cathedral chapter, the priests and clerics who oversaw the building of the cathedral. Her mother had died in childbirth, leaving Father to care for her. Her nursemaid, Dame Frances, took care of her until she was three, but since then, she had tagged along everywhere with Father. Dame Frances had been her Sometimes-Mother until last year when her husband had moved the family to Chantelle, some thirty miles away. Now, at twelve, almost thirteen, Father depended on her sharp memory when he met with the priests.

She went to the work shed, trundled back a wheelbarrow and started throwing broken stone into it. Some-times she paused to turn over a broken bit: a crooked finger, a twisted smile, or a bulging eye. She ran a finger across the polished stone eyelids and closed her own eyes, trying to memorize its feel. When something was intact enough to study, she put it aside to take back to her worktable to try to copy. Laurel wanted to be a stone carver and already had a set of small tools. Whenever she had a chance, she was working at the stone. It had taken her a long time just to learn to make a smooth, flat surface. She secretly honed the stone until it pleased her, and when she had finally shown her father the flat stone, he had swelled with pride. He showed it to Master Benoit and the other masons and carvers. After that, she had dozens of teachers, everyone eager to help the architect's odd daughter.

Laurel knew what they said behind her back, that this wasn't a woman's work, that she would give it up soon. But meanwhile, she learned whatever they would teach. After all, she had grown up with the cathedral and the masons; it was the family business. She heaved up the wheelbarrow handles and shoved it toward the rubble pile near the west end of the cathedral. She would dump the broken stone there, to be used later as fill between the cathedral's inner and outer walls.

Maybe Father would let her carve the new Sloth herself. No, she wasn't ready. But soon—soon!—she would be carving statues for the Cathedral of St. Stephens by herself.