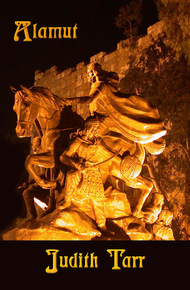 A knight from across the sea, a beleaguered kingdom, a spirit of fire.

For close to a hundred years the Crusader Kingdom of Jerusalem has stood with its thin line of fortresses against the combined power of the world of Islam. Now the Sultan Saladin has declared war against the young Leper King.

Not all the inhabitants of this embattled country are firmly established on one side or the other. One such family, half Frank, half Saracen, stands on the boundary between the two worlds and faiths.

Into that family comes Prince Aidan, son of a mortal king and an immortal enchantress. He journeys into the East for love of a kinsman and the lure of adventure, and stays for grief and mortal vengeance.

Morgiana is neither human nor mortal. She is the Slave of Alamut: the Master of the Assassins' most deadly weapon. She knows little of gentleness and nothing of love—until she meets the prince from across the sea. But he has sworn to destroy her.

Set in the world of the award-winning series, The Hound and the Falcon.

Judy and I have been around science fiction and fantasy for a very long time together. I won't say how long, but she actually published her first novel a few years before I published my first novel. Over the decades, Judy has grown an incredible following of readers and fans of her fantastic novels and has been on a bunch of award ballots and bestseller lists. When I asked her to be in this bundle, she had a fantastic historical alternate fantasy that fit perfectly in Universe Between. Alamut just happens to be a prequel to that first novel The Isle of Glass. I am so honored to have Judy in this bundle. – Dean Wesley Smith

The sun was gentle in the first hour of its rising. It lay lightly upon the hills of Jerusalem; it washed with gold the walls of Aqua Bella castle, and the village huddled beneath them, and the green that was the great wealth of the demesne: the oaks that were holy, the olives that were more than holy, and the glorious tangle that traced the track of the stream. Women were washing in it, singing sweet and high, with here and there a ripple of laughter.

He came by the road that led to the sea, riding all alone, all his armor and his weapons borne on a dove-grey mule. His destrier was a fine blood bay, and he a fine high-spirited creature himself, his grey cloak flung back from a flame of scarlet, and gold about his brows, and a ruby in the pommel of his sword. He sang as he rode, setting the charger's pace.

The women's singing faltered and died. Safe in their veils of greenery, they stared out at the wonder: a knight in gold and splendor, unguarded, unattended. He was a mad one, surely, or one of God's protected.

His voice was both deep and clear, free and glad and fearless, calling the air to arms for a battle thirty years won.

No fear of hell had ever troubled him, nor any fear of mortal steel. His stallion danced, shying from the flutter of a veil; he laughed and bowed to the eyes staring wide or shy or brightly fascinated from the thicket, and never lost the rhythm of his song.

His eyes asked no pardon of Saracen women, nor ever thought to need it. Among the leaves a smile flashed, or two, or three. The charger snorted. Its rider bowed again and wheeled about, cantering up the road to the castle. The women watched him go. One by one, slowly, they went back to their washing. In a little while they were singing again. A new song: of morning and of sunlight, and of a spirit of fire on a Frankish charger, singing the conquest of their people.

The road and the song ended together. The knight hailed the guard at Aqua Bella's gate, light and glad, offering his lone and splendid and most assuredly Christian self to a stare both narrow and wary. The wariness was Outremer, embattled kingdom that it was, with the Saracen snapping at its throat; and people always stared at him. "Tell your lord," he said, "that his kinsman comes to greet him."

The eyes narrowed to slits. The bay charger stamped, tasting darkness under the morning's splendor. The knight shivered in the sun. His gladness was gone, all at once, irretrievably.

"Brychant!" Young, that voice within, but breaking with more than youth, though it tried to be steady. "Brychant, who comes?"

No one, the guard was going to answer. The knight watched the thought take shape. Now was no time for guesting fools, fresh off the boat from the look of this one, white as a lily in this sun-tormented country, riding alone and all begauded like a lure to every bandit in the east.

The guard's mouth was open, the words coming quick and harsh. But the speaker within had come up beside him. A boy, slender, dark as a Saracen, with eyes like a wounded fawn. They took in the stranger, once, quickly, and again more slowly, going impossibly wide. "Prince?" the boy whispered. "Prince Aidan?" He gathered himself with an effort that shook his narrow body, and bowed, all courtesy. "Your highness, you honor us. You must pardon Brychant, we are all amiss, we — "

Prince Aidan was out of the saddle, Brychant still glowering, suspicious, but bellowing for lads to tend the stallion and the mule. The prince spared no thought for anything but the child who was so perfect a courtier, and who struggled so fiercely against the flooding tears. "Thibaut," said Aidan, taking him by the shoulders. "You would be Thibaut." He was shaking. Aidan stroked calm into him. "What has happened?"

The tears burst free, and knowledge with them. "No," said Aidan very softly. "Oh, no."

The boy was past hearing. The guard and the servants were nothing and no one. Aidan's arms gathered the child; his mind followed where the darkness led.