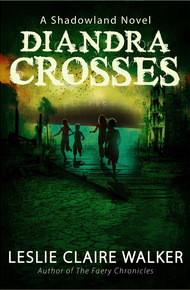 Since the age of seven, Leslie Claire Walker has wanted to be Princess Leia — wise, brave, and filled with heart, even in the face of impossible odds. She is the author of the Awakened Magic Saga, which includes two complete series of interconnected urban fantasy novels and stories filled with magical assassins, fallen angels, faeries, and found family. Leslie currently lives in the rain-drenched Pacific Northwest with a cast of spectacular characters, including cats, harps, and too many fantasy and romance novels to count.

Order or chaos? Suffocation or the dangerous breath of freedom?

Diandra Brown must make a choice.

When her people cast the one person who matters over the town border and into the void, Diandra follows—and loses her brother in the shadowlands.

Time moves strangely. Deadly ground shifts underfoot. The ruin of the old world—a world of cities and stars broken by the great cataclysm—beckons. Its magic echoes in her blood and bones.

Can Diandra find her brother? Can she save him—and save herself? Will she answer the call of a magic that will change her very soul?

One of my favorite people and writers, Leslie is well known for her Faery Chronicles series. She also writes in her Soul Forge series of books, among others. In this bundle I was lucky enough to get the book Diandra Crosses, a vivid and detailed story of a sister fighting to not only save herself, but her brother. World-spanning magic threads through this book, keeping the reader riveted to the world that Diandra finds herself facing in the name of family love. For more information about Leslie's fantastic fantasy worlds, go to leslieclairewalker.com – Dean Wesley Smith

I wished I were anywhere except school. I couldn't stand another minute sitting in a stupid desk in a cold room with fifteen other almost-growns, learning about history and breathing in the smell of the vinegar used to clean the room the night before. Mr. Parker perched on the corner of his desk, hair slicked into place. The sight of his wrinkled khakis and yellow wool sweater made me itch. He droned on in a voice as spine-chittering as fingernails scraped across a chalkboard. The void this. The void that. The void: also known as the black.

Everyone trained their eyes and ears on the man. No one even glanced at me. They all wanted to. They didn't dare.

The chill of the morning settled cool and clammy against my exposed skin. I curled tighter inside my hoodie. I'd chosen gray because I felt that way inside. Apparently, no one else had the same reaction to death.

I scuffed my shoe on the faded linoleum floor. The small sound caused Mr. Parker's big head to twitch. A strand of his meticulously groomed black hair fell into his baby browns. He swept it back into place, glared at me, and cleared his throat. He went on, speaking directly to me.

I took it exactly the way he meant it―as a warning. I was under suspicion, after all.

"Nobody knows why the void came into being," he said. "Or why it surrounded our town. Only that it appeared over the course of several weeks and that by the end it cut off our access to other towns and other people. Folks who stepped into the black never returned. The only person ever to even move part-way into the void during the early experiments never said another word. The black killed his voice. And he brought back one thing he managed to grab before our scientists pulled him to safety: bones. The ribcage of one of those who had gone before him.

"So we know the void kills. We know that once a person steps over the town border and into the black, there's no returning alive."

The same words, the same lesson, as taught every time the Dads threw someone over the border. Over the line. Every time they threw someone away. P-town had no room for the disobedient. Not when our very survival depended on following the letter of the law. I'd always taken the lesson seriously―it would be idiotic not to―but this morning I felt something else. A tightness in my belly that had never been there before.

My glasses slid down my nose half an inch. I pushed them up with a finger and raised my hand.

I tried to keep my voice steady. "What about the ghosts?"

My words fell like anvils. After the sound of them died away, the silence thickened.

Mr. Parker cleared his throat again. "When those who die in the void do return to us, they return deadly. They inhabit the dark places in our town. The places where no one goes. The underpasses of the highways that no longer lead anywhere. Their ghosts are hungry. The prey on anyone who comes near them."

"What happens to them?" I asked.

He shrugged. "It's not your concern."

I trembled. From the bottoms of my feet to the crown of my head, I shook. Angrier. This had been done not only to someone I knew―everybody knew everybody else in this crappy town―but to someone I loved.

"It completely is," I said.

"The mourning period is over, Miss Brown."

"One night? A few hours? How is that supposed to be enough?"

"You think?" This horrible thing had been done to someone I loved by men like Mr. Parker, who might be a teacher during the day, making sure we got all of our indoctrination just right, but who was a Dad at all other times. Dad: a law-enforcement machine. A man who kept the underage in line or else. A judge, jury, and executioner.

I recognized the feeling in my gut for what it was. A roiling fire of grief. "How could you do it?"

He shook his head. "I wasn't present for this punishment."

"How can you live with yourself?"

A gasp escaped the boy behind me. I knew without turning to look that his pale skin would be flushing a color close to the orange of his freckles. His name was Owen. He lived down the block from me. To think I used to find his flushing charming. I must've been temporarily insane.

My lips curved into a tight smile.

"You think this is funny?" Mr. Parker asked.

He folded his arms across his chest. "The girl who died last night―"

"The girl," he repeated, as though her name might be diseased and contagious, "deserved what she got."

She hadn't done anything besides express a desire not to pair up and punch out a kid. That fate closed in around her and every other girl at the ripe age of seventeen. She refused it. She didn't want to become a Mom. Moms creeped her out. Not just because giving birth activated their psychic powers, because maybe it could be a good thing to know what would happen before it did. That way, you could help people. Save them. The Moms had a purpose in our town, and that was it. But the Moms also weren't allowed to live with their children or even to see them ever again. They had to go to the convent and live with the other Moms. Their minds connected. They became one mind. One hive.

How could a person be human and be a part of a hive like that?

I couldn't help thinking about how Sabrina acted around my Mom when we went to visit her―illegally, of course―at the convent. The way she stared at my Mom. The way she kept her distance. It made my heart hurt.

Every cell in my body begged me to keep my mouth shut. If I stopped now, we could all shrug off my behavior. Sure, I could claim outcast status for the next few weeks, but after that it would all blow over. No harm, no foul. Things would go back to normal. As if Sabrina had never transgressed. As if she'd never lived here. Or existed. The Dads had trained me to do that all my life.

Did she deserve what happened to her? Mr. Parker expected me to agree. To let it drop. But I couldn't lie. That would be the worst thing I'd ever done. I couldn't stay silent. Even the idea felt like a betrayal.

"You know the law, Miss Brown. It could never have ended differently for her."

My whole body convulsed on the inside. "The law is wrong."

The second those words rolled off my tongue, I froze. I hadn't planned to say that. I wasn't even sure I'd been thinking it. It'd started in my belly along with my grief and busted its way out. That was the only explanation.

Mr. Parker sucked in a breath. "Do you mean that?"

That was an understatement. "She's my best friend."

I stared at him.

He walked over to the door of the classroom, the fabric of his pants whispering, and opened it wide. He motioned with one hand for me to go with him.

I looked at the other kids in the room. At Owen, the exact color I'd pictured in my mind's eye. At Abby, the girl who sat across from me, prim and proper in a worn denim jumper and brown boots with patched soles. The hairs on her arms stood at attention. She was scared to death. For me, sure, but mostly for herself. I understood exactly how she felt.