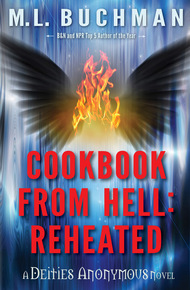 After 14 billion years of cleaning up after God, the Devil is having a mid-life crisis. Before she can settle into a proper state of self pity, a cookbook editor unwittingly helps a Buddhist Hungry Ghost steal the Software that Runs the Universe, and it all goes to Hell from there.

Bestselling author and three-time Top 10 Author of the Year by Booklist, M.L. Buchman writes in many genres. He's an acclaimed military romance writer but he also writes some incredible fantasy and when the idea for this bundle came about I immediately thought about his Cookbook from Hell: Reheated novel. When the Devil has a midlife crisis, you know you are in for a great time. You can find out more about M.L. Buchman books at mlbuchman.com. – Dean Wesley Smith

Eric Erikson hit the buzzer for Valerie's apartment and got no response.

He considered that it was awfully late, she'd probably gone to bed. Maybe he should go. But she'd sounded so desperate.

He hit the buzzer again, longer and harder.

No voice squawked out of the speaker. But there was click, then a groan, like someone in deep pain. Like someone who'd been stabbed, or worse. When the door release buzzed, he went in fast. He shouldered his bike and bolted up the two flights. He dropped his bike in the hall, leaning it against the sturdy mahogany railing that overlooked the stairwell, and knocked on her door with a fast rat-a-tat.

He was preparing to test his shoulder against her door locks when he heard the chain drop and the deadbolt being thrown back. The door cracked open and The Mac looked out at him. At least a version of her did. Someone had taken the sharp-edged senior editor and run her through the Photoshop blur tool. Several times.

She blinked at him like a sleepy cat. Rather than pulled back into an immaculate French Roll, her dark dark-red hair, half dry from a shower, snarled about her face and cascaded well past her shoulders. Half of it was caught inside a faded Smith College sweatshirt that might have once been white and gold. It was that oversized thing that women bought for sleeping in. Right now, the too big collar had slipped down to one side and revealed a vast expanse of splendid right shoulder. The sweatpants matched, equally oversized. Her bare feet danced back and forth a bit, the floor was probably cold this time of year, just like at his place.

She blinked those sleep-fogged eyes at him again. He'd never been close enough before to really see them. He knew they were blue, but had never noticed the little flecks of gold. It made him think of calico cats, not super editors. Not of a woman powerful enough to build her own imprint on the West Coast much to the New York publisher's shock.

The Fearsome Mac, tousled. He had to take a steadying breath. It was like having the universe change on you unexpectedly. The fiercest, most driven, and most successful editor in the conglomerate's most profitable imprint never had a single thing out of place. Not a fold of her jacket, not a hair on her head, not a comma in a thousand pages.

Also, he was looking down at her. Normally in serious heels and power suits, she was completely intimidating. Towering over people, even taller ones by sheer intimidation if necessary. Now, barefoot, she stood five-six, five-seven tops. Weird.

"Uh… hi." She blinked once more and came a little more into focus. "Thanks for coming." She looked at one bare wrist. Then the other. Then she turned slowly in place, stopping when she faced a grandfather clock opposite the door.

"You came fast. I've only slept about twenty minutes. I appreciate it, E-Squared."

Like he'd wait until morning when receiving a panic call from The Mac.

"It's over there." She swung open the door and pointed toward the table.

Most of the apartment was about what he'd expected. Beautiful art on the wall, but rather than investment art, it was mostly soft, Impressionist-style scenes of Italian coasts and French lavender fields that invited you in. Some comfortable chairs, clearly intended for a larger room, but crowded together companionably enough to host a small circle of friends. Light curtains of gold and gray which masked the much heavier curtains of midnight blue needed to cover old apartment windows during the wet Seattle winters. Hardwood that probably dated back a century, complemented by the rosewood-hued pillows on the dusky-aubergine couch.

All very cozy except, taking up a third of the space, an oaken table that would seat eight or ten if it weren't shoved into a corner. Nor was there room to pull it out.

This table, he decided, was all Valerie and very little Mac. It was a disaster worse than his apartment, covered in leftover food wrappers, a delivery pizza box, manuscript pages, and an impressive array of soda cans. He wanted a photograph of this, something to keep in his mind's eye the next time she was busy scaring the shit out of him and everyone else in the office, but he didn't think reaching for his smartphone would be a wise choice.

A trail of clothes led from the chair in front of the computer, past the kitchen and down the hall toward the bathroom. A very intriguing trail. Nice slacks and a simple cashmere sweater that belonged to Mac. A "Come to the Dark Side, We Have Cookies!" t-shirt he wasn't so sure about, since it would imply that The Mac had a sense of humor. And very feminine underwear and bra in pale blue satin that certainly didn't belong in the same time zone as the Woman of Steel.

He did his best to simply take it all in with a single glance then look away. Wouldn't do to be caught staring at his boss' underwear, even if it wasn't on her body.

He edged over to the table and sat, not even removing his jacket. The Mac morphed into a tousled woman who owned sheer, blue satin underwear was giving him problems. And if her underwear was strewn across the oak flooring, what was under the sweats…

He shook his head to clear it.

She'd moved up close behind him, kicking her slacks over to stand on and insulate herself from the cold floor.

"Mathilda Reeves' cookbook is a disaster. I was close, so close. Another ten or twelve hours and I'd have had it ready for the printer, and then it crashed. You have to save me, E-Squared. I hadn't saved in a couple of hours, but I'll deal with that if I have to. I don't have a backup at all, and I'll just completely lose it if I have to redo three days of work. I don't think I can face that. And that talking lingonberry scared the shit out of me."

He nodded as if she was making sense. Eric knew that The Mac swore, but he didn't know she had limits. That was news as well.

"Okay, I'll see what I can do." He didn't give voice to his next thought, that he'd be a lot less nervous if she'd move back a few steps and didn't sound so human-woman-in-distress rather than demanding-boss-on-a-tear.

He flipped open the laptop.

An apple-green screen faced him. He hadn't seen one of those in years. It was a normal laptop, but instead of some GUI applications all made for point and click, there was a black screen covered with apple-green question marks in a font like the early DOS days, like in the old mainframes. He wiggled the mouse, but there was no cursor to move around, just the blinking underscore character inviting him to type.

He tapped an enter key.

He typed "exit," but it didn't return to its modern, windowed interface.

The computer flashed a solid screen of bright green at him.

When he'd blinked and could focus on the screen again, he saw a new message there.

Don't do that! I already told her not to do that, but does she listen? Nooo! She just slaps me up the side of my screen, like that's going to jar some electrons loose.

Eric glanced up at Valerie.

She shrugged and whispered, "I was pissed and out of other ideas."

He turned back to the screen.

And now I've got you to deal with? Go away Homo sapien. I've got no more use for you than her…

Unless you happen to know where God is?

"I don't." Eric was so surprised that he typed his response before he'd even thought about it. "In Heaven?"

Nope! Already checked. Not there. Now go away, I'm thinking.

Eric turned to look up at Valerie's gold-flecked eyes. "Uh, this may take a while."