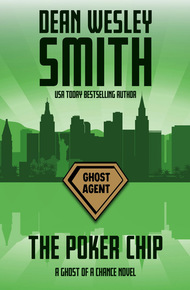 Just fifteen minutes after Dr. Jewel Kelly meets Deputy Sheriff Tommy Ralston, they both die. They simply become ghosts, hanging around their own death scene in the mountains of Montana, waiting for something to happen. But even as ghosts they find each other really attractive.

In life, they both worked to help people. It seems that in the afterlife, their job continues.

The strangest crime-fighting ghost duo ever. And the sexiest.

I am the curator of this bundle and also was the editor of Fiction River: Universe Between. It is tough to talk about myself, but I can say the novel in this bundle is one of my crazy Ghost of a Chance novels, where ghosts save the world and save people along the way. I suppose I should also tell you I have over 23 million copies of my books in print and have published well over 150 novels and more hundreds of short stories than I can count. And I've made a bunch of bestseller lists along the way. You can find out a ton more about all my books at wmgpublishing.com. Or if you are a writer, come follow my craziness at deanwesleysmith.com. – Dean Wesley Smith

TWENTY-SEVEN MINUTES before she died, Dr. Jewel Kelly stepped out of the front door of her small office in Buffalo Jump, Montana, and set her medical bag on the sidewalk beside her. She then made sure the office door was locked tight. With a control on her key chain, she triggered the alarm. She doubted anyone around this town would take anything, but better safe than sorry.

She picked up her bag, pulled her ski parka in close around her, and stepped over under the eve of Bernie's General Store. Her little office was like an outbuilding off of Bernie's store. Three rooms and a bathroom.

Enough for her to get the job done, but not by much.

She again set her medical bag down on a dry spot near the building and turned to face the small town and wait for her ride.

She was a tall woman at five-ten, with long brown hair she loved to keep pulled back, and green eyes people said could stare right through you. At twenty-five, she liked more than anything else to run to stay fit. And she loved reading a great romance novel. In med school in Seattle, she had had time to run, but not read.

Now she had more than enough time for both. She usually put in a five-mile run up near the high school every afternoon, staying off the main highway as much as possible.

The run every day at least made her feel alive.

A cold mist of a late April spring day covered the main street of Buffalo Jump, Montana, which was also a major two-lane north-south highway. The air had a bite to it, and she had no doubt that later tonight the mist would turn to snow and the road would freeze over.

She had planned to spend the night in her log cabin a half mile to the south of town, in front of a nice fire, sipping on a glass of white wine and reading the new Nora Roberts novel. Then maybe later, after a nice bath, she would have a date with her best friend, Mr. Buzzy. She had a hunch that in Buffalo Jump, Montana, she was going to wear out good old Buzzy before she found a real man she wanted to date.

To her right and south was Jay's Gas and Minimart, across from that was Carol's Restaurant, a diner that actually had some pretty good food and was pretty clean. Beyond that, the two-lane highway disappeared off into the pine forest, now growing dark as the early evening wore on.

That was the road out of these mountains to Missoula.

To her left and north sat the twenty buildings that made up the main part of Buffalo Jump, including an old hardware store and some basic offices, two bars, and two antique stores to catch the occasional tourist who thought to stop.

She had been in the antique stores, but not the bars. She wasn't much of a drinker except for a nice glass of good wine after dinner.

On the other end of town, she could barely see through the light rain the white tower of the only church, a Presbyterian church, whose basement doubled for a meeting room for the big town events. She hadn't been in there yet either. She had never been much of a church-goer back in Boise where she grew up.

A sprawling red-brick school sat off the main street against a pine-covered hillside and serviced all grades for most of the county, with dozens of lumbering, bright-yellow school busses pouring in and out of town every day. There was even had a high school football team.

Her favorite running route was from her office, up past the school, out a dead-end gravel road for two miles, then back.

Right now she could run up the middle of the main street and no one would even notice. There was no traffic at all and just a few cars parked in front of the bars.

Silence closed in around her and she shuddered. Not even a slight wind through the pines around the town broke the oppressive stillness.

She pulled her dark-blue ski parka in around her, making sure it was zipped, then pulled her ski gloves out of her pocket and put them on. She could never seem to be warm enough here, except when sitting in front of the fire in her cabin.

Under the parka, she had on a nice white blouse and today she had worn jeans for only the second time. It seemed everyone else in town wore jeans, including the mayor, who ran the small grocery store, so she might as well.

Besides, jeans were far more comfortable in the cold weather. Not as drafty as the skirts she wore the first month on the job here. Nothing like a cold Montana wind whipping up a skirt and hitting a cotton-covered crotch to give a girl a real thrill.

And not a fun thrill.

She was the town's only doctor, actually the county's only doctor. And at times like this, she had no idea why she had agreed to the tuition deal to practice medicine here. Sure, she got all her debts forgiven, not a small chunk at all, if she stayed five years, but she wasn't sure if she could handle five years out in the middle of nowhere like this, even though her dream had been to be a GP.

She had only been here for six weeks and mostly been bored out of her mind. She didn't drink and she didn't go to church. That didn't leave a lot left to do except exercise, read and give Mr. Buzzy a workout regularly.

She had delivered one baby in the small building the county called a hospital up beside the school. And she had fixed a few broken bones and one concussion from a bar fight.

For one night, she had even had a woman in the little four-bed hospital with a gall bladder attack. Jewel had to check in on her every hour to make sure the woman didn't get worse and need to take a Life-Flight out to Missoula.

The woman hadn't gotten worse and the woman's husband the next day had driven her to Missoula, four hours away, for the operation.

Today was Jewel's first call for an injury in Jackson Ridge, another small town about twenty miles away on the highway to the north. The call had come into her cell phone from the county sheriff, and he had told her a deputy would pick her up.

She had told the sheriff she had her car and could drive fine, but the sheriff, a man named Martin, insisted a deputy go along with her.

"Trust me," he had said. "The area this call came from is not a place you go in alone. Especially with that little overseas thing you drive."

Clearly, her red Miata had been noticed, and not in a good way.

"Besides," the sheriff had said, "it's going to be snowing soon and the highway's going to be slick. You don't want to be driving after dark out in these woods until you get to know the roads some."

She had thanked the sheriff and said she would be waiting in front of her office in ten minutes.

"Deputy Ralston will be there as quick as he can," the sheriff had said and hung up.

So now she stood under the eve of the general store, moving from foot to foot, her hands deep in her ski parka pockets, watching the excitement of Buffalo Jump on a late Thursday afternoon.

Except for the misting rain, nothing moved.

What the hell had she been thinking coming here?