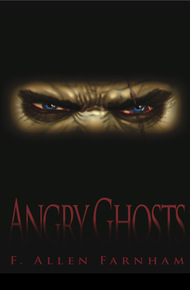 A child of the Space Age, Frederick Allen Farnham always held a passionate interest in high technology. Impatient to live in that futuristic world, he eagerly consumed any scientific article or Science Fiction novel that promised a glimpse. Herbert, Heinlein, and Huxley are three of his greatest influences.

Farnham's first novel, Angry Ghosts, was acquired by Eirelander Publishing in 2009 and re-released on e-book in 2013. The sequel, Black Hawks From A Blue Sun, was released in 2010. His latest book, The Exhausted Dead, was released in 2012. The series' conclusion, Plasma Rain, is currently in production.

When not working he loves to travel, enjoying the variety of people as much as the landscapes. He now resides in Milford, NH with his dog, Hamlet.

For news, updates, and information please go to CadreOnePublishing.

Humanity was wiped out in less than two months.

The assault was methodical and efficient. Bombardment vaporized building and bone. Invasion cleared out the larger pockets of survivors. Plague finished the last few clinging to life. Extermination complete, the azure-skinned beings journeyed home and resumed their normal lives.

Seven hundred years later, one of their cargo ships went missing. A burst of static preceded the disappearance, but investigations found no trace of ship or crew. Decades passed without event until another vessel vanished, again with the burst of static. Another decade. Another disappearance. Never a trace.

A rumor began in dark alleys and religious communities, then spread like fire. Most laughed when they heard it, dismissing the speaker as superstitious or overly pious: but secretly, all trembled inside. Deep in its heart of hearts, this ancient race knew the genocide of humanity was a great crime. And where all of their technology and power have failed to provide answers, the rumor may be true:

"The Art of the Space Opera had always held a fascination for me. When I first met Allen and started reading his work, I was caught up in the fact that he has found his niche in a sub-genre that had been passed over for years. It has finally found a new voice in this very enjoyable read." – The Dome

The last person on Earth died suffering and alone.

Her dignity tattered and sullied as her torn silk dress, the woman shivered in the dry heat as she clutched her child. "It's all right, honey, don't you worry," she rasped, gently bouncing the boy in her arms. His limbs swayed like tiny pendulums, his clouded eyes stared past walls and ceiling.

A plasticized ID badge on her collar proclaimed her Executive Vice President of Soshiba Varicorp. The photo on the badge depicted a glamorous woman with bright white smile and sparkling green eyes. The woman wearing the badge could have been her grandmother.

Like a zombie, she shuffled out from the shelter’s blast-skewed entryway. Harsh gusts tossed the matted locks of her once fair hair and pelted her gaunt cheeks with the dust of shattered concrete. Roaring crackles above drew her blotchy red eyes, and she followed the strange aircraft as they climbed out of sight through hazy, darkened skies.

Her stomach heaved, triggering a fit of hacking coughs. Fresh blood renewed the ruddy crust on her lips and chin. Too exhausted to cry anymore, she slumped to her knees and collapsed into the thousands of bodies littering the street.

There was no warning of the attack. Power, communications, data, monetary transactions—every strand in the dense web interconnecting humanity simply disappeared at once. That night, the sky gleamed with the stars’ dazzling luminance, unseen since times before electricity, enhanced by the glowing trails of plummeting satellites.

Before anyone could fully comprehend the scale of the failures, the first detonations bloomed in brilliant indigo over the largest cities.

Whole coastlines shuddered under the savage blasts, launching towering tsunamis from Greenland to Antarctica. Rampant fires and surging volcanism blotted the sky with sooty ash, reducing the sun to a pale disk. Rioting was barbaric, and in those frenzied weeks, people brutally fought one another for any resource they could scavenge.

For weeks, the detonations continued, methodically reducing the largest areas of man’s endeavors to glassy, charred craters. When the indigo blasts finally ceased, small bands of confused and emaciated survivors crawled from their shelters. They struggled to comprehend the nightmare surrounding them and wondered if it was over or if the lull was prelude to something worse.

Days later waves of assault transports descended through the smothered atmosphere, expelling row after row of armored soldiers. The soldiers sped through the ruined landscapes, their saffron-yellow eyes never leaving the sights of their short weapons. Like hounds, they sniffed out their prey and flushed whole groups of survivors to the streets where hovering gun ships cut them down.

The flood of soldiers cascaded into the surrounding neighborhoods, igniting panic wherever it ran. Long, slender tails gave the invaders superior balance over the piles of rubble, and their pitched-forward, loping gait was too swift for any to outrun. Shrieks, screams and weapons’ fire were continuous; and all the while, more troop carriers descended from above. The meager human resistance was annihilated, the global infrastructures were smashed.

But then, the terror was over.

As suddenly as they came, the invaders packed into their carriers and ascended. Formations of special planes replaced them, flying low and slow in wide patterns, atomizing a sweet smelling, sweet tasting mist into the air. The few still alive—desperate, starving, dying of radiation and thirst—could not stop themselves from lapping the dew off any surface it touched.

In so doing, they ingested a virus tailor-made for the Human genome.

Thriving amid the squalor, the pestilence ravenously devoured the last pockets of tired, ragged survivors, liquefying their internal organs.

No ambassadors were received or sent. No attempt at communication earned reply, not even the unconditional surrender.

The invasion was never about conquest. It was about extermination.

Forty thousand years of Human development were eliminated in less than two months. And so, with a hacking cough, Earth’s great civilizations died.

Debate carried on for decades among the blue skinned invaders, then centuries, until popular sentiment at last decreed the annihilation of Humanity was a grievous mistake. The reasons, justifications, and provocations simply could not equal the deliberate extinction of a nascent species. Naturally, large segments of the society maintained until the end of their long lives that the pre-emptive extermination prevented an imminent and costly war. It did not matter if they were right. This ancient and splendid race had committed genocide and it weighed heavily on their collective conscience.

Time rolled on and memory of that crime had all but faded when the disappearances began. Deep space transports vanished along their routes, with only a burst of static before the void swallowed them whole. For all their technological advancement, none could rationally explain the disappearances, and amid the rumors and suppositions that followed, an arcane term resurfaced with new meaning. Those who spoke publicly of “Da-oma Ka-chi-in” were derided as superstitious or overly pious, but all who heard the term trembled inside, their unpunished guilt of massacring an entire people awakened by an ancient religious phrase meaning, “Ravenous, Angry Ghosts.”