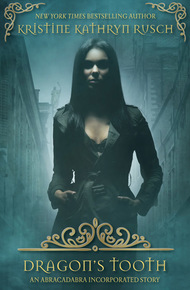 Tara, a former agent of Abracadabra Incorporated, once helped shut down black magic all over the world. She retired from that world for a quieter life of running a little magic shop.

But black magic finds her anyway. On a trip to Paris, she discovers a deadly dragon's tooth.

Now, she must shut down the source of its dark magic or risk losing everything.

USA Today and New York Times bestselling author, Kris has also won just about every award there is to win in science fiction, fantasy, and mystery. She has also won the reader's choice award numbers of times for both Analog and Asimov's. In this bundle, I wanted to show off one of my favorite of Kris's series, the Abracadabra Incorporated world. Dragon's Tooth will get you scrambling for more in that world, I promise. For links and information about all of Kris's work, go to kriswrites.com – Dean Wesley Smith

THE LAST PLACE Tara expected to find magical items was in a tourist shop on the rue de Rivoli. The shop was tiny, perhaps twenty-five square feet, with glass shelves recessed into the wall and a one-person counter made of brick. Most of the touristy merchandise—the usual postcards, canvas bags with pictures of the Eiffel Tower, and Toulouse-Latrec mugs—were on rack displays on the sidewalk outside.

Inside, though, she found a treasure trove. Mingled among the delicate Limoges china and the petite Lalique glass sculptures were unique items: cloisonné that looked authentically medieval, perfume bottles made from glass so old it was cloudy, and little crosses that appeared to be made of hammered, stamped gold.

She was the only customer inside, but outside tourists gathered around the postcards, discussing the choices in loud voices. A few of the tourists spoke English; the rest were speaking Japanese or German.

It was her personal curse that she understood banal conversation in all three languages.

Horns honked and someone shouted an expletive in French. She made herself focus on the items on the backlit shelf before her, trying not to feel overwhelmed.

It had been eight months since she had been to Paris. Eight quiet months in which she revamped the store she'd taken over in the Loire Valley. It had taken two months to cleanse the stench of the dark arts from the place, and two more to find the right merchandise. Then she had to suffer the ridicule of the locals who did not believe an American—no matter what her experience—should run a magic shop that had been in their fair city for hundreds of years.

She wasn't making a profit yet. She doubted that would happen for another two years or more. But she was finally making enough to hire an assistant, and the assistant's presence enabled her to come to Paris on a buying trip.

And to get away.

Most of the items on the backlit shelf were small—ruby-encrusted thimbles and china tea cups so tiny that no doll could hold them. But in the middle of the shelf, someone had laid a fringed bit of tapestry. Its ragged edges suggested that it had been torn off a larger piece.

Above the tapestry, someone had taped a small sign. In black India ink, someone had calligraphed a single word. Relique. Relic, in English. Or, more properly, relics.

Bits and pieces of a past that probably had not existed: a splinter of wood from the True Cross; shards from a Roman burial urn; and a lock of dusty-looking hair shaped like a broach, purported to be taken from St. Peter's body shortly after he died.

Next to the hair was a long bone-colored piece in the shape of a dagger. At first, Tara peered at it, thinking it to be ivory. Then she noted the yellowish stains at the base, and the hollowed remains of something else, something—

"May I help you?" the voice, not friendly, spoke English instead of French.

Tara turned. A man stood behind the tiny glass counter, his hands resting on it, but leaving no marks. His black hair was cut short, accenting his hawklike nose and sharp eyes. He wore a perfectly pressed white linen shirt, open at the collar, revealing a tuft of dark hair that disappeared down the button line.

She had no idea what tipped him to her nationality. She was not wearing the American uniform of jeans, a t-shirt, and sneakers. Instead, she wore black pants and a mohair sweater purchased here in Paris. As an indulgence, she had wrapped a silk scarf—the only Hermes she owned—around the sweater's turtleneck.

"Oui," she said in French, a language she had been fluent in since she was three. "I am curious about the relics."

His face did not soften as she had expected it to. Usually French shopkeepers loved to discuss their wares. Perhaps the attitude was different here on the Right Bank, near the Louvre, the Tuileries, and the Seine, one of the greatest tourist areas of Paris.

"I cannot vouch for the True Cross," he said, still speaking to her in English. "They did not give certificates of authenticity at the Crucifixion."

Tara didn't smile because he hadn't meant that as humor. He'd been completely serious. It seemed everyone she met lately had no sense of humor, and she missed it.

She was afraid she was losing hers as well.

She frowned at the man. She did not know him; she was certain of that. She hadn't seen him when she was Abracadabra Incorporated's most successful troubleshooter. Nor had she run into him during her corporate climb. And she was certain he had not come to her new shop, Enchanté.

Instead of answering him, she turned back to the relics, and continued studying the ivory dagger. Its surface was uneven, chipped slightly, and lined. Most ivory was smooth, even after hundreds of years, and it had not turned yellow at the base.

She peered into the hollow end and started. No one had removed a hilt. Instead, there appeared to be organic material inside, dried and molded to a hollow center that went halfway down the ivory itself. Not a dagger then.

Her stomach tightened. The tooth wasn't round enough to be a whale's tooth, nor was it long enough to be an elephant's tusk. The tooth was flat on both sides, and sharp on the edges, coming down to a perfect point at the tip, almost like an arrowhead, only without the groves so often found in anything manmade.