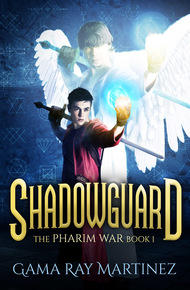 Gama Ray Martinez lives near Salt Lake City, Utah. He moved there solely because he likes mountains. He collects weapons in case he ever needs to supply a medieval battalion, and he greatly resents when work or other real life things get in the way of writing. He secretly hopes to one day slay a dragon in single combat and doesn't believe in letting pesky things like reality get in the way of his dreams.

Sponsored by a rich patron, Jez attends the Carceri Academy, the mystical school where many of the country's elite go to study. Though his patron forbids him to learn it, Jez finds he has an aptitude for battle magic. When a sleeping sickness sweeps the land, Jez begins experiencing strange visions of the creation of the world. He investigates them and discovers a trail of dark magic that indicates his patron may not be as benevolent as he originally believed, and Jez himself may be much older than anyone suspects.

Death hunted beneath the waves. Dusk saw it approach, an enormous

The street led to an open gate in a wall surrounding the Academy grounds. The buildings inside seemed to shimmer a little more. They were the same blocky style as those in the city, unlike the single storied ones outside though, these each had at least two floors, and when he looked closely, he saw a faint rune carved on a large building to his left. People of all ages, some as young as Jez and others with wrinkled faces and stooped postures, moved through the streets. Most on the left wore green robes. On the right, they wore blue, though there were plenty of other robes as well.

"The main streets mark district boundaries," Besis said when Jez asked. "There are seven districts, each devoted to a different dominion, beasts on the left and protection on the right. The next term won't start for another three weeks, so you'll have time to settle in. Has the baron had you awakened?"

"You're going to study illusion and presumably other schools of magic. You need to be awakened before you can do that." Jez shook his head, and Besis shrugged. "Well, we can get that taken care of before the start of the term."

"It doesn't look like anyone else here is just waiting for the term to start," Jez said, glancing at all the robed students hustling about. One girl in blue saw Master Besis and approached to speak, but Besis shook his head. The student frowned and turned away.

"We're at the end of a term right now, and exams are keeping everyone busy. A few, like Cinatra," he nodded at the departing student, "always try to make excuses for not being ready."

"You think she'll fail then?"

Besis shook his head. "Actually, she's rather gifted. If she would only realize that, she'd have an easier time of it."

"And you give all these people their exams?"

Besis shrugged. "I'm the protection master, but I let my adjutants issue all but the advanced binding tests, and even those are relatively straightforward. I summon a spirit and unleash it on the student. If they bind it, they pass. If they don't, well…"

He let it hang for a second, and it was only when Jez gaped at him that a grin split his face.

"Only joking, my young friend. My tests are a bit more complex than that, but my preparations were done days ago. If you ever study binding, I'll show you."

"If Master Dusan approves, you mean."

Besis inclined his head. "Yes, there is that."

Before Jez could say anything else, his nostrils flared to the overpowering scent of sulfur. His eyes locked on the nearest building. Besis went silent and followed his gaze. He said something, but it seemed far away, and Jez's attention was locked on the building. He took a step toward it, and Besis put a hand on his shoulder. Jez looked at him. He seemed to be saying something about the purpose of the building, but the exact words escaped him. All of Jez's attention was focused beyond the wall. There was something inside, something that didn't belong. Its presence spoke into the depth of Jez's soul, and it spoke the language of fear. Jez shook himself free of the master's grasp. Besis tried to reach for him, but then, the screaming started.

The main door of the building was flung open, and three people practically tripped over each other trying to get out. A crack ran up the wall, glowing fiery orange. One of the students spotted Master Besis and ran toward him, but before he was halfway there, the wall exploded outward. A shower of dust and stone rushed out from the hole, covering everyone within twenty yards and forming a cloud of blackness. People screamed. One boy in green turned into a bird and flew away. A pang of terror ran through Jez, but it was a distant thing, more like a memory or a dream than an actual emotion. The student running toward them fell to the ground, shouting in terror.

The cloud roared so loud the ground shook. Some people nearby screamed that the mountain was erupting, but somehow, Jez knew that wasn't the case. A second later, his suspicions were confirmed as the smoke congealed into a winged figure wreathed in flame. It stood at least ten feet tall. Bone spikes jutted from its arms and legs. Its face was covered in scales and a pair of curved horns came from its head. Fire billowed from its nostrils with every breath, and a forked tongue flickered from its mouth. Its skin looked like the same black stone as the rest of the city. Burning cracks ran up and down its body which constantly spurted fire and smoke. Twin flames burned where its eyes should be. It took a step forward and began bringing a flaming foot down on the fallen student. The boy, perhaps two years older than Jez himself, shrieked in terror.

Jez didn't think. He just threw his arms forward. Energy surged through him. Raw force rushed at the creature, distorting the air. It crashed into the beast's leg and the creature came down hard on the ground several feet away from the fallen student. Cracks spread out from the point of impact. One made its way under the student who yelped and rolled out of the way. Master Besis gaped at Jez and lowered his arms. Some distant part of Jez's mind recognized that the master had been about to do the same thing Jez did. Jez had simply been quicker. He had known this creature was coming.

The creature, the phobos, though he didn't know how he knew the name, had already gotten to its feet. It took a step toward them. Jez made two quick circular motions with his left hand and one with his right. Lights rushed at the creature, splashing against the middle of its chest. It spread out and formed a wide circle. The fear in Jez vanished, and others around him began to regain their composure. They were still afraid, but it was no longer the supernatural fear the monster had been giving off.

The phobos turned its gaze to Jez. It reached for him, but his fingers danced in complex patterns his eyes couldn't follow. A thin strand of light shot forward from his hand, expanding as it moved toward the creature. It wrapped itself around the demon's claws and forced its hand to the side of its body. Another did the same to the other claw. Strand after strand shot from Jez's hand as he wove incomprehensible patterns in the air. A few seconds later, the phobos was covered in web-like strands of power, as a fly caught by a spider. It tried to move, but the bindings held it fast. It toppled forward, shrinking as it did. By the time it reached the ground, it was the size of a doll that fit in the palm of his hand. Jez let out a breath, and his legs collapsed out from under him. Instantly, Master Besis was at his side. He helped Jez to his feet and scooped up the imprisoned phobos.

"How did you…" Besis began, but he looked around. A crowd had formed and was pointing at them. "Never mind. Let's discuss this in my office."