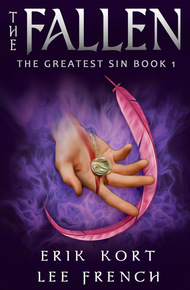 Lee French lives in Olympia, WA with two kids, two bicycles, and too much stuff. She has published over a dozen fantasy and science fiction titles, including the bestselling SPIRIT KNIGHTS young adult urban fantasy series. She is an active member of the Northwest Independent Writers Association, SFWA, and the Olympia Area Writers Coop, as well as being one of two Municipal Liaisons for the NaNoWriMo Olympia region and a founding member of Clockwork Dragon Books. Find out more about her work at authorleefrench.com.

Erik Kort abides in the glorious Pacific Northwest, otherwise known as Mirkwood-Without-The-Giant-Spiders. though the spiders often grow too numerous for his comfort. He is defended from all eight-legged threats by his brave and overly tolerant wife, and is mocked by his two obligatory writer's cats.

When not writing, Erik comforts the elderly, guides youths through vast wildernesses, and smuggles more books into his library of increasingly alarming size. He also writes under the open pen name Erik Marshall.

For hundreds of years, the Blaukenev clan has wandered across Tilzam, from one end to the other and back. Each wagon carries history, love, laughter, pain, sorrow, and secrets. Their greatest secret of all may be Chavali, the clan Seer.

There are always people who want secrets.

Some will do anything to get what they want.

"Oh, right. Of course." He moved quickly, practically jumped onto the stool while shooting terrified looks all around the tent. "I've just never done anything like this before, and, um, I'm worried about..."

They would be gone tomorrow morning, and likely wouldn't return for several years, if ever. Letting go of his hand, she gave him a mildly sympathetic look. "The bones have spoken. She has betrayed you, and you must deal with that in your own way. The bones, I think, suggest you confront it head-on, but this Marcus may not be wise to cross."

He nodded, resigned. "Thank you."

"It is not a thing I wish to be thanked for. Good fortune to you." She watched him get up and leave, and snorted at him as soon as the tent flap was shut again. Idiot.

He was, of course, the first of today's parade of idiots and twits, each of them with a story as uninteresting as the next, a story Chavali had heard dozens of times before.